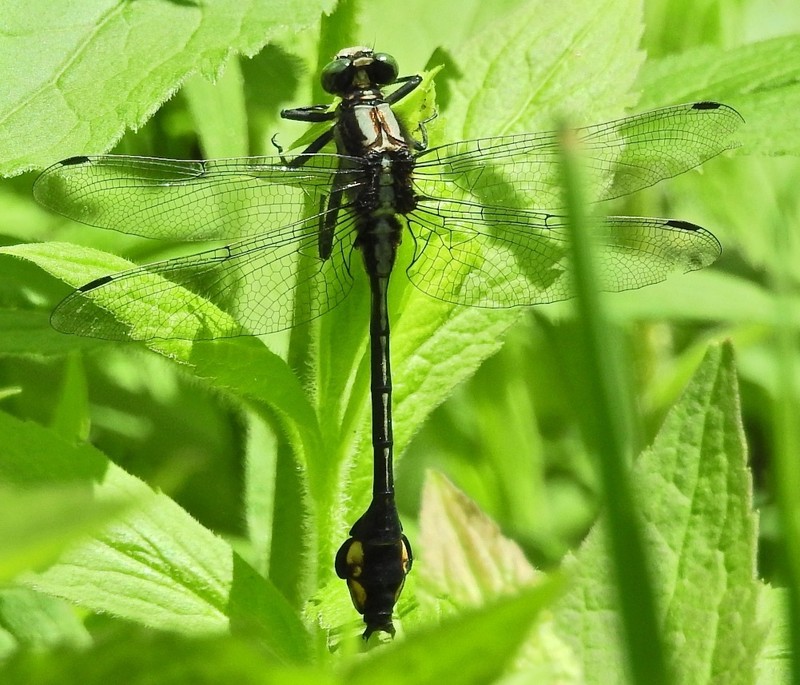 Adult dragonflies in the genus Gomphurus are known to have a preference for large prey items such as butterflies and even other dragonflies (Paulson 2011).

In New York, <i>Gomphurus ventricosus</i> is known from two rivers in a single county in northern NY with historical records from two additional counties (New York Natural Heritage Program 2020). It's current known range is small in the state, found in flowing water habitats with good water quality where threats to habitats could include water contamination, sedimentation, alteration of natural hydrology (Holst 2005).

Recent observations (new locations) of Skillet Clubtails have been made in two rivers in the St. Lawrence watershed (New York Natural Heritage 2020). There has been no estimate of population size for this species based on statewide occurrences. New location information on the Skillet Clubtail in New York may be reflective of heightened interest in surveying for this species rather than a population increase or a range expansion (NYS DEC 2005).

Two historical records are known from Herkimer and Orange counties. The full extent and size of the populations have not been determined and the species may have historically been present in medium to large rivers throughout eastern New York; thus, long-term trends are unclear.

Skillet Clubtail larvae are known to inhabit rivers with clear water and good flow (Jones et al. 2008) and presumably require high water quality with high dissolved oxygen content and substrates that have little sedimentation. Thus, any activity which might lead to water contamination or the alteration of natural hydrology could impact populations (NYS DEC 2005). Such threats might include agricultural run-off and other pollutants, dams, shoreline modifications, increases in the sediment load of rivers, and changes in the dissolved oxygen content (NYS DEC 2005).

Further searching and larval sampling may be necessary before specific stewardship needs at a location can be identified. However, any measures to reduce water contamination or hydrological alteration such as agricultural run-off, shoreline development, and damming that would affect river flow should be considered when managing for this species (NYS DEC 2005). Maintaining a forested buffer around the river would be beneficial to adult clubtail populations (Lee 2007).

Further research is needed to define the distribution, life history, and population size of the Skillet Clubtail. In addition, research is required to understand the habitat requirements and threats to this species, and to create appropriate management guidelines for its persistence in known locations (NYS DEC 2005).

Throughout its range, Skillet Clubtails inhabit small to large clear rivers with partial mud bottoms and good water quality (Donnelly 1999). Recent observations in New York are from medium to large rivers and sand and gravel substrates.

This species is distributed from Nova Scotia west through Ontario, south through Minnesota to Missouri, east through Tennessee and North Carolina and north through the Northeastern United States (Nature Serve 2019).

Gomphurus ventricosus has the smallest overall body size and widest club (wider than the thorax) on the tip of the abdomen than any other Gomphurus (Nikula et al. 2003).The male abdomen is black with yellow dorsal streaking through segment 7 (Jones et al. 2008). Segments 8-10 of club are all black dorsally, with large yellow spots on the sides of segments 8 and 9 (Nikula et al. 2003). The female is similar with a wider yellow abdominal stripe and smaller club (Paulson 2011).

Skillet Clubtail adults have been collected between June 8 and June 25. It would be reasonable to search from late May to mid-July for further records.

The time of year you would expect to find Skillet Clubtail present and reproducing in New York.

Carle, F. L. 1994. Dragonflies and Damselflies (Odonata) known to or likely to occur in Vermont. Checklist of species and global and state ranks prepared for the Vermont Nongame and Natural Heritage Program.

Information for this guide was last updated on: June 23, 2020