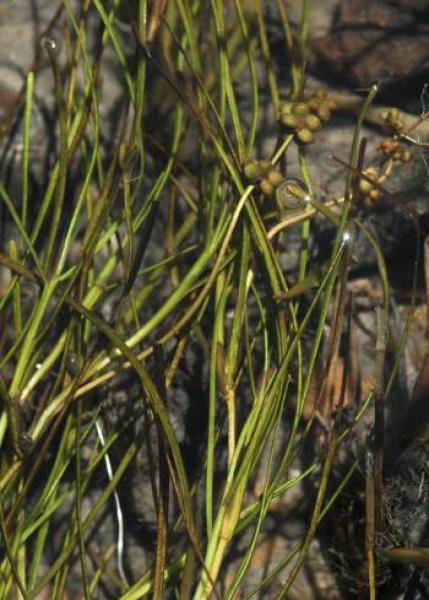 The genus was named by Carl Borner (1880-1953), a German entomologist from Bremen, for Wilhelm Adolf Stucken (1860-1901), headmaster of the Gottingen Gymnasium and amateur botanist associated with the Bremen herbarium (Flora of Wisconsin website, Wikipedia contributors). The species name refers to its very narrow leaves and the subspecies to its northern distribution although it occurs farther to the south than the subspecies filiformis which only occurs in northern Canada, Alaska, and Greenland (Flora of North America 2000).

The short term trend may be a decline but remains unknown because only three populations are extant as of 1988, and precise counts have not been made during recent surveys. An additional historical population may have disappeared as it could not be relocated during the most recent survey in 1998. Resurveys with population counts are needed to establish a baseline for trend assessment.

The long term trend appears to be a significant decline in populations. One population has been extirpated,  three populations have been confirmed as extant but lack specific counts, and the remaining 20 historical records (from 1940's or earlier) have not been resurveyed.

Destruction by the removal or chemical treatment of aquatic vegetation from lakes could threaten populations of this species occurring in managed lakes.

Studies to determine the specific habitat preferences of the species in New York are needed.

In New York, the only two extant ppulations have been found in high pH settings including a small marl-bottomed stream with the alga species Chara, and in an aquatic bed in shallow water of an alkaline lake. Historical collections of this plant has been made from swiftly running water and shallow channels of large rivers, washed up on sandy inland lake beaches, in cold brooks, and in crevices in metamorhpic rock in a lake (New York Natural Heritage 2015). Shallow, still or slow-moving, circumneutral to basic water of lakes and rivers.(Go Botany 2015). Calcareous, saline, or brackish shallow to deep waters of standing waters ponds and lakes, cold slow to fast moving streams and rivers, ditches, and coastal inshore waters at elevations from 0--3280 m (FNA 2000).

In New York, Slender Pondweed is found in central and western NY, as well as in Jefferson and St. Lawrence Counties.

This is a circumboreal species ranging from Greenland west to Alaska and south to California, Arizona, New Mexico and Nebraska in the west. From Minnesota its U.S. range extends east through the upper midwestern states Wisconsin and Michigan up through New York and the northern New England state and from New Brunswik and Nova Scotia to New Foundland. It is considered possibly extirpated from Ohio, Pennsylvania and New Hampshire.

This plant is an aquatic plant that grows with its narrow-linear (0.2-1.5mm wide), alternate leaves completely submersed. Its leaves have closed stipular sheaths and are typically blunt to obtuse at the apex, but sometimes with a shallow central notch (retuse) or rarely ending in a small distinct point (apiculate). The leaves are cross-septate throughout.  The flowering spikes are submersed or sometimes floating and bear well-separated lower whorls of flowers on thin, flexuous peduncles.The floral stigma are broad, sessile, and do not form a beak on the mature fruits (drupes).  The drupes are uncompressed and 2-3mm long (GoBotany 2015).

The entire plant with leaves, mature fruiting stems and intact fruit are needed for positive identification.

In New York, the only other Stuckenia species is S. pectinata which can be distinguished from S filifrmis by its open stipular sheaths with overlapping edges vs. closed sheaths, leaf blades that are commonly acute at the apex vs. typically blunt or obtuse in S filiformis, and stigmas borne on a short style persisting on the mature fruit (drupes) as a tiny beak vs. stigmas sessile and not forming a beak. S pectinata's drupes are 3-4.5 mm long, vs. 2-3 mm long drupes in S. filiformis. Plants from the genus Potamogeton with narrow submerged leaves may be confused with Stuckenia filiformis, but they can be distinguished by the presence of floating leaves (if they occur), leaf blades that are cross-septate only on their central lacunar bands, stipules distinct from the blade or typically fused for less than 10 mm (vs. typically 10 - 30 mm in Stuckenias), and mature drupes compressed with a distinctly coiled embryo.

The leaves of this species typically appear in late July and persist through early October. Fruiting generally begins in early August and continues through early September. (fruit mid-August -mid-October for ssp. occidentalis

The time of year you would expect to find Slender Pondweed vegetative and fruiting in New York. 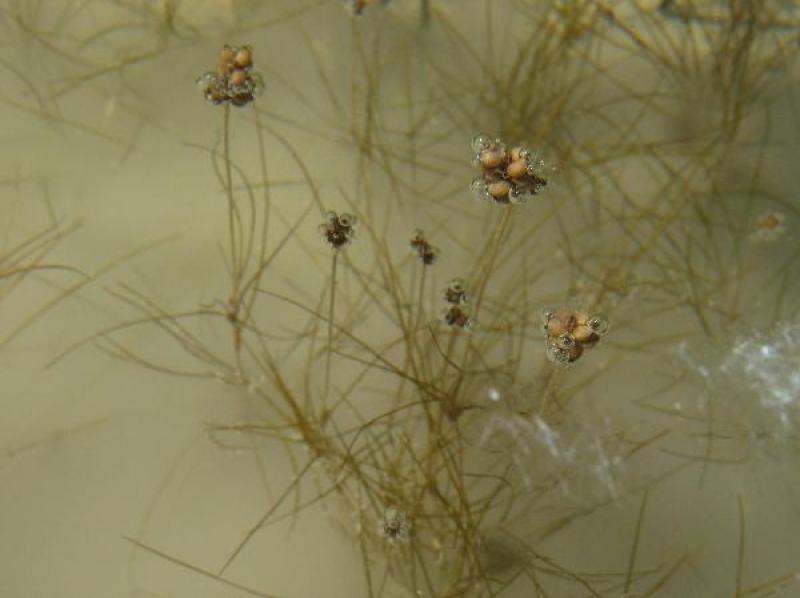