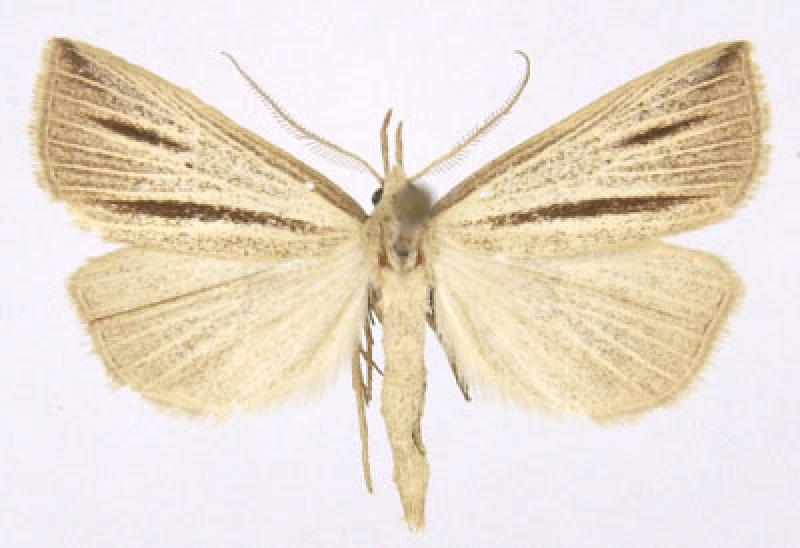 There is only one known occurrence in appropriate habitat of the Two-striped Cord Grass Moth in New York.

There is only one known occurrence in appropriate habitat. There have been specimens taken from the Albany Pine Bush that were probably strays from nearby wetlands, but this does indicate that there is a second occurrence in Albany County. More inventory is needed to determine where additional populations are located. This species is threatened by invasive plants and possibly by mosquito spraying.

The short-term trends indicate that this species is stable.

The threats include loss of habitat to succession, invasive plants such as Common Reed (Phragmites australis) and Purple Loosestrife (Lythrum salicaria), or human activities that impact wetlands. Mosquito spraying is a potential threat to this and other wetland species in New York, but the seriousness of this threat is difficult to evaluate.

The life hisotry and feeding habits of this entire genus are very poorly known.

The habitat is not entirely understood in New York or globally, other than that this is generally a wetland species. In Wisconsin, where the species is widespread, it is reported as characteristic of wetlands in general, but is not specifically mentioned for bogs or wet prairies (Ferge and Balogh 2000). In Ohio, the only known locality is a fen. It is also a wetland species in Quebec (Handfield 1999). From the general range and habitat information, it does seem likely this species is found mostly in circumneutral to slightly alkaline wetlands rather than acidic wetlands. It is probably associated with a particular grass or large sedge.

A specimen was collected in 1877 at Evans Center, near Buffalo, New York and this is nearly the southernmost record for this species. Otherwise, it has been collected in New York in Albany County where there is more than one occurrence. This is a species of northern wetlands and it could turn up in the Adirondack-Lake George region. The absence of any specimens from the well-collected Ithaca area and from Vermont is noteworthy.

This species occurs from New Brunswick to Manitoba and south into the northern tier of the United States, especially Maine and Wisconsin. The range extends farther south near Lake Erie into northern Ohio and southwestern New York). It may have been less rare in the past. Most historical records are from Maine and Ontario, with modern United States records mostly from Wisconsin (Ferge and Balogh 2000) and New York (Tim McCabe, New York State Museum). It is uncertain how many Quebec records are recent. There is only one current site in Ohio, according to Rings et al. (1992), and the species has not been found in Vermont.

The normal form, which represents greater than 95% of the specimens, is easily recognized by anyone with any familiarity with the Noctuidae family of moths. This form has two dark dashes on each forewing.

Almost all adults can be identified by the long dark streak near the rear edge of the forewing and similar, but smaller streak more toward the apex. Some hint of such streaks may also occur on the hindwings. Note the lack of any indication of the normal postmedian or subterminal lines on the forewings. Identifications should be verified from a collected specimen.

This species is usually collected at lights, but some members of this genus are frequently flushed in the daytime from sedges or grasses and this one probably could be as well.

The feeding habitats of larvae in this genus are little known, but they apparently use grasses and sedges.

The adults occur in early July in Albany County, probably for about two weeks in a given year. Ferguson (1982) gives the range of dates as 5 July to 7 August rangewide, although most of the records these dates are based on are farther north than those in New York. Based on what little is known for related species, the larval stage is probably in late July or August to June. The egg stage is probably about a week long and largely overlaps the adults. The pupal stage is likely to be about two weeks.

The time of year you would expect to find Two-striped Cord Grass Moth reproducing, larvae present and active, eggs present outside adult, and pupae or prepupae present in New York.