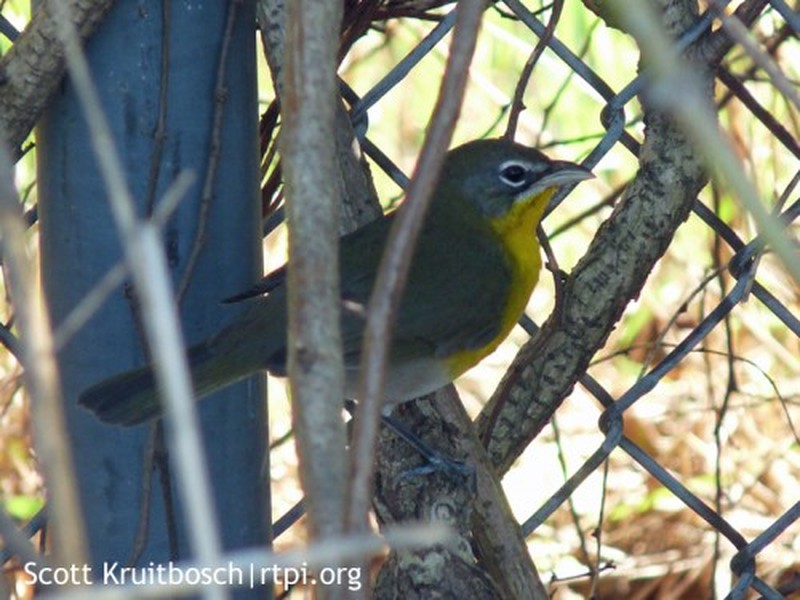 State Conservation Status Rank
S2?B
Imperiled in New York (most likely) - Conservation status is uncertain, but most likely very vulnerable to disappearing from New York due to rarity or other factors; typically 6 to 20 populations or locations in New York, very few individuals, very restricted range, few remaining acres (or miles of stream), and/or steep declines. More information is needed to assign a firm conservation status. (A migratory animal which occurs in New York only during the breeding season.)
Global Conservation Status Rank
G5
Secure globally - Common in the world; widespread and abundant (but may be rare in some parts of its range).

Males perform display flights during the breeding season for females, other males, or human intruders (Cornell Lab of Ornithology 2019). From a perch or hovering, the male sings and drops slowly with exaggerated wing flapping. A hollow, thumping sound likely made by the wings ends the flight.

Yellow-breasted Chats were once more common breeders in the state, but these birds declined by 78% between the first and second Breeding Bird Atlas (McGowan and Corwin 2008), and currently there are four known locations in New York (NYNHP 2020). Suitable habitat for this species appears to be on the decline (Levine 1998, NatureServe 2019) due to development and forest succession.

The short-term trend for Yellow-breasted Chats in in New York is unknown, but it is likely stable or declining. Only four occurrences, in the Hudson Valley and on Long Island, have been documented in the last 15 years (NYNHP 2020).

The long-term trend of Yellow-breasted Chat in New York shows a decline. At one point these birds were common breeders on Long Island, Staten Island, and in the lower Hudson Valley (Levine 1998). A 1940 breeding survey found them in 10 locations on Long Island and 11 locations in Westchester and Rockland Counties (Bull 1964). Breeding on Long Island had been reduced and become more localized by the 1990s (Levine 1998). There was a 78% decline in Breeding Bird Atlas blocks between the first (1980-1985) and second (2000-2005) atlases, with yellow-breasted chat only detected in 27 blocks in the second atlas with only one block having confirmed breeding (McGowan and Corwin 2008). Shrubland habitat for these birds has also been declining in the state (McGowan and Corwin 2008), which may explain some of the declining trend.

The main threat to Yellow-breasted Chat in New York is habitat loss. These birds likely became more common breeders in New York when European settlers arrived and began clearing forests (McGowan and Corwin 2008). Populations seem to have declined once old fields began to succeed into forest or were cleared for development (Levine 1998, NatureServe 2019, Eckerle and Thompson 2020) because they breed in dense, shrubby areas to breed in (Levine 1998). Additionally, this species is parasitized by Brown-headed Cowbird (Molothrus ater), although it is not known if this a significant threat to their success (NatureServe 2019)

Management needs for Yellow-breasted Chat revolve around conserving early successional forest and shrubland due to their breeding habitat requirements (Eckerle and Thompson 2020). The size of the habitat patches appears to be important for Yellow-breasted Chat; Shake et al. (2012) found that chats in North Carolina appeared to require a minimum patch size of 2.3 ha. Patches of shrubby habitat greater than 5 ha can support breeding populations (NatureServe 2019). Forest management with rotating timber cuts ensures there is always some breeding habitat available for these birds (Wallendorf et al. 2007). Clear-cutting and shelterwood cutting that leaves behind shrubs can create new habitat through natural succession, and powerline rights-of-way can be managed to encourage dense shrubbery suitable for breeding chats. (NatureServe 2019).

Further research into minimum patch size requirements (NatureServe 2019) and the relationship between population density of chats and breeding habitat availability is needed (Eckerle and Thompson 2020). Additionally, research into how the reproductive success of Yellow-breasted Chats is affected by Brown-headed Cowbird (Molothrus ater) brood parasitism would be beneficial.

Chat breed in dense shrubby habitats, such as old pastures, thickets, regenerating logged forest, and fencerows (NatureServe 2019, McGowan and Corwin 2008). They also utilize habitat along wet areas such as streams, ponds, and swamps. Chats nest in dense vegetation, generally less than 2 meters above the grounds, such as bushes, vines, and low trees (NatureServe 2019, Bull 1964). Ricketts and Ritchison (2000) found that chats at their study site in Kentucky were more likely to fledge young in nesting sites with an open overstory and dense understory with brushy cover below one meter.

Chats have been recently observed in southeastern New York in the lower Hudson Valley and Long Island. The only confirmed record of breeding during the second Breeding Bird Atlas was in Sullivan county (McGowan and Corwin 2008). Yellow-breasted Chats have also been observed scattered throughout several western New York counties during breeding season, with some possibly breeding.

Chats have a large head with a heavy, black, slightly curved bill and a long tail. Adults are olive green on their back, wings, and tail with a white lower belly (Cornell Lab of Ornithology 2019). These birds get their name from the bright yellow throat and breast. They have a gray head with a white mustachial stripe and the appearance of "spectacles" created by a white eyering that connects to the bill. Males and females looks similar, but during breeding season females have grayish lores and a gray lower mandible as opposed to black for males. Males have a great variety of songs consisting of caw notes, whistles, cackles, gurgles and other noises that are repeated and strung together in different ways (Cornell Lab of Ornithology 2019, Eckerle and Thompson 2020). Songs can be similar to a mockingbird but are more limited with longer pauses between phrases (Peterson 1980). Adults also make a variety of calls that include single notes and harsh scolding (Peterson 1980, Cornell Lab of Ornithology 2019), and also defend winter territories with a “chuck” call.

During breeding season males will sing in the morning and evening and occasionally at night (Cornell Lab of Ornithology 2019). These birds generally hide and skulk in the dense brush of their breeding habitat, so you are more likely to hear one than see it; however, males will sometimes sing from an exposed perch during the spring. Studies suggest pairs are 90-95% monogamous (Eckerle and Thompson 2020).

Males arrive at their breeding territories around mid-May (Eckerle and Thompson 2020). Bull (1964) lists chats as rare in the state before mid-May and after October. Eggs are typically laid in late May to mid-July. Nests are open, bulky cups composed of grasses, leaves, bark, and weed stems (Eckerle and Thompson 2020). Females usually lay 3-5 eggs, and incubation lasts 10-12 days (Cornell Lab of Ornithology 2019, NatureServe 2019). Both parents tend to the young (Cooper and Ritchison 2005), which are born helpless with closed eyes. Young leave the nest approximately 7-10 days after hatching.

The time of year you would expect to find Yellow-breasted Chat active and reproducing in New York. 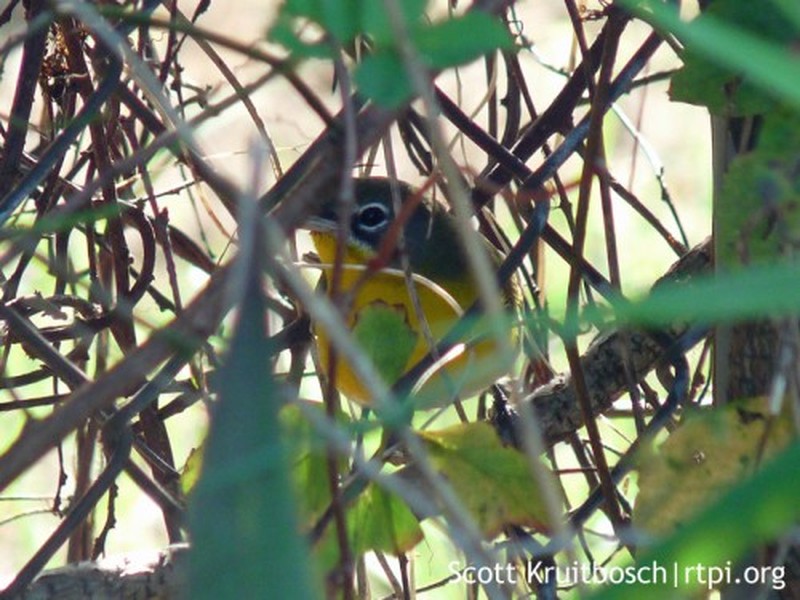 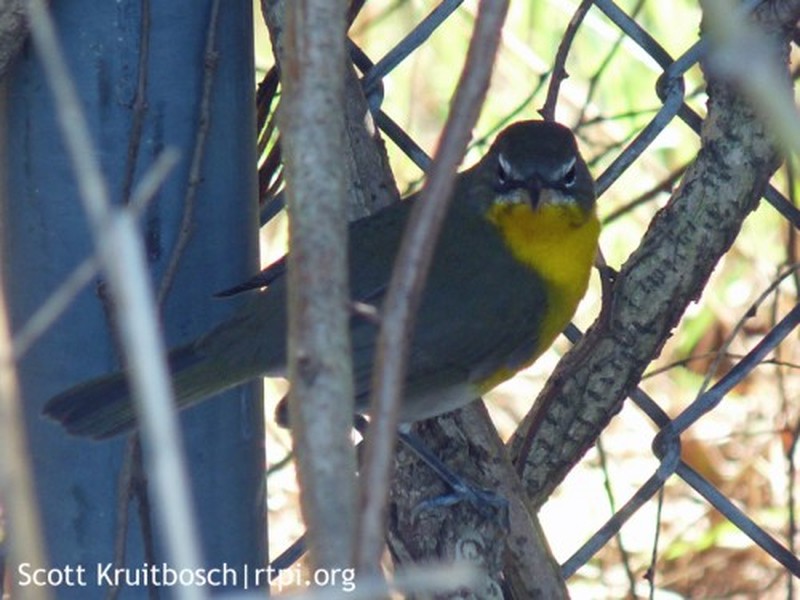 Information for this guide was last updated on: September 28, 2020