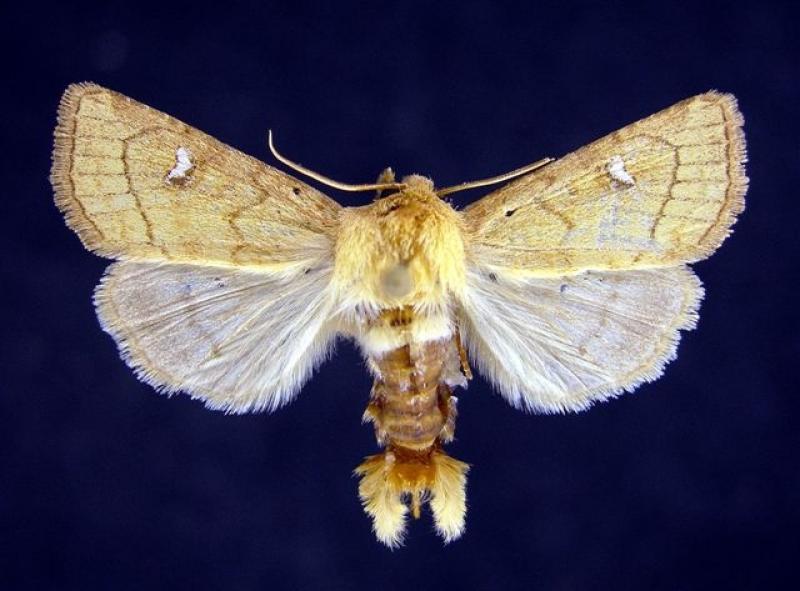 Some small fruit fly species (Tephritidae) may depend on the larvae of this moth, which, in turn, depend on northern gama grass (Tripsacum dactyloides) (Bird 1913; Kunstler 1991).

Currently, only one population is known to exist in New York City (in Pelham Bay Park). Historically, one other population was documented nearby in Rye, New York, but this population no longer exists (Forbes 1954; E. Quinter, personal communication, cited in City of New York 1987; Schneider 1999).

The short-term trend for this moth in New York State is unknown. The only population known to exist in recent decades was confirmed to still exist in 1999.

The long-term trend for this moth in New York State is likely declining. Historically, the moth was documented from two sites in the vicinity of New York City. In recent decades, the moth was confirmed to still exist at one of the sites. However, the moth no longer exists at the second site (Forbes 1954; E. Quinter, personal communication, cited in City of New York 1987; Schneider 1999). Over the past few centuries, the area in and around New York City has experienced heavy development pressure, resulting in loss and fragmentation of habitat for this moth.

Accidental fire and the spread of the invasive plant Phragmites australis are potent threats. Fire can eradicate a population, and Phragmites outcompetes and replaces northern gama grass (Tripsacum dactyloides), the sole food source for the larvae. Mosquito spraying is also a threat.

Since this moth is sensitive to fire, if an area occupied by the moth must be burned, some areas should be left unburned as refugia for the moth. After the area occupied by the one known population was burned in 1987, the moth was only found in patches of grass that escaped the burn (City of New York 1987). In addition, it would be beneficial to control the spread of Phragmites, and restrict or minimize mosquito spraying, in occupied areas.

This moth is found in wetlands, which are usually or always tidal, that contain an abundance of the larval foodplant, northern gama grass (Tripsacum dactyloides). At the only population known to exist in New York State, the moth is found primarily in wetlands and wet meadows in a park. Northern gama grass is found at scattered wetland edges throughout the park and composes a 3-acre swath in one 25-acre wet meadow (Kunstler 1991).

This moth has only been documented from the vicinity of New York City.

This moth has been documented in New York City (Pelham Bay Park) and Rye, New York. It is possible that a population also occurs in South Carolina. It is thought that the moth should occur more widely in New Jersey, Delaware, Maryland, etc., and perhaps Connecticut.

This small moth has a wingspan of approximately 1.25 in (34-35 mm). It has light reddish-brown forewings with fine lines and subtle shading, and a white, crescent-shaped spot in the center. The hind wings are yellowish brown (Bird 1913; City of New York 1987). The larvae have a small, rounded, pale yellow head; are whitish and translucent; have a purplish-brown ring on the anterior half of each segment except the first and twelfth that gives them a characteristic ringed appearance; and have sixteen legs (Bird 1913).

This borer moth lays a single brood of eggs each year (Bird 1913). In the spring, larvae that have emerged from eggs burrow into the base of stems of northern gama grass (Tripsacum dactyloides), their sole food source, eventually killing the stems (Bird 1913; City of New York 1987; Kunstler 1991). After feeding, the larvae usually leave the stems in the first two weeks in June (E. Quinter, personal communication, cited in City of New York 1987) to pupate under the soil. They tend to emerge as moths in mid-late June and early July (City of New York 1987).

The larvae feed only on northern gama grass (Tripsacum dactyloides).

The best time to see this species is during its larval stage, around June 1, when it can be found burrowed in the base of stems of its larval food source, northern gama grass (Tripsacum dactyloides).

The time of year you would expect to find An Ear Moth present, reproducing, and larvae present and active in New York.

The moth may not belong in this genus. Both the distinctness and limits of ryensis are poorly known. The moth differs some from A. erepta from the Mississippi Valley, but it needs to be compared to more eastern series. The taxon erepta may merit its own genus.

Information for this guide was last updated on: March 8, 2013