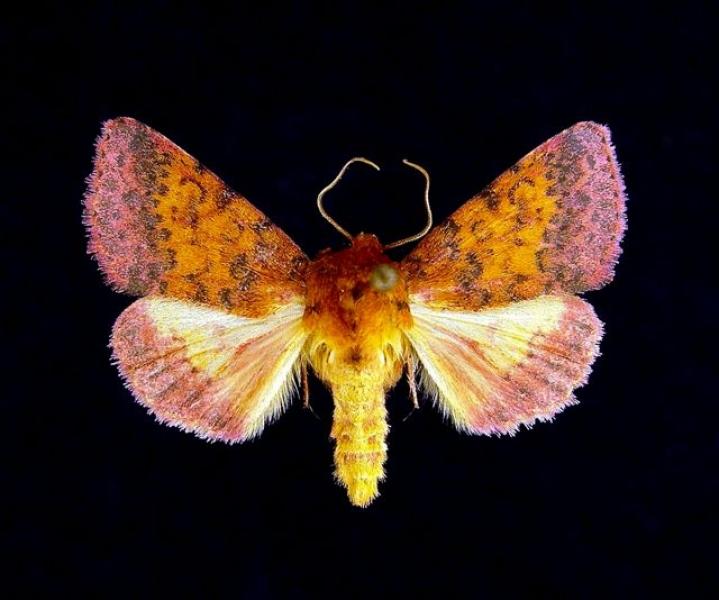 Additional inventory is needed to determine the status of the Aureolaria seed borer in New York State. Three populations are documented; each was documented in the 1980s and was not surveyed since. The larval foodplants are fairly widespread in dry oak woods. However, the species is thought to be uncommon in the northern part of its range, including New York State.

The short-term trend for the Aureolaria seed borer in New York State is unknown. The three populations known to exist in recent decades were documented in the 1980s and were not surveyed since.

The long-term trend for the Aureolaria seed borer in New York State is unknown.

The main threats to the Aureolaria seed borer in New York State are fire suppression, loss of habitat due to development, and excessive browsing of larval foodplants by overpopulations of deer (Schweitzer et al. 2010). The Aureolaria seed borer is especially susceptible to browse damage caused by deer because young larvae that are feeding on fern-leaf yellow false foxglove (Aureolaria pedicularia) and smooth yellow false foxglove (A. flava) are likely to be consumed directly by deer that are browsing those plants, and older larvae will starve if deer eat all of the flowers or young seed pods. An exacerbating factor is that A. pedicularia, which is possibly the most commonly used foodplant, is an annual, so deer can eradicate it in an area rather rapidly. Repeated browsing by deer can also kill A. flava, which is a perennial. Fires during the species' active period of August through October would likely eradicate a population, and fires in June or July might prevent the flowering of the larval foodplants, which would also eliminate a population (NatureServe 2010). Similarly, mowing before the foodplants seed is a threat.

Most populations of the Aureolaria seed borer will persist if adequate habitat remains and at least some larval foodplants are allowed to seed during the species' active season. The main larval foodplant, fern-leaf yellow false foxglove (Aureolaria pedicularia), is an annual and may shift dramatically in space and time. The plant can be almost decimated in some years but can recover quickly in subsequent years. Prescribed fires that are conducted in the winter or spring would likely benefit the larval foodplants, since A. pedicularia is associated with recent disturbances, such as fires, and it declines within a few years following a disturbance. Prescribed fires that are conducted in June or July might prevent larval foodplants from flowering, which would eliminate a population, and prescribed fires conducted during the species' active season in August to October would eliminate a population, unless some habitat was left unburned to provide refugia for the species. Areas where the Aureolaria seed borer is documented should be evaluated to avoid additional encroachment or fragmentation by development. Measures to reduce the overpopulation of deer would benefit this species. In addition, occupied areas such as powerline cuts and roadsides should be mowed after the foodplants seed. Since the Aureolaria seed borer spends most of the year as an underground pupa, it is not likely to be harmed by spraying conducted to control spongy moths (D. Schweitzer, personal communication).

The Aureolaria seed borer occurs in dry, sandy or rocky, oak-dominated savannas or open oak woods with an abundance of fern-leaf yellow false foxglove (Aureolaria pedicularia) or smooth yellow false foxglove (A. flava), the larval foodplants. These habitats are usually located on rocky uplands, along the edges of old fields, along powerline cuts, or in other openings. The larval foodplants are tall, yellow-flowered woodland herbs. The species is especially found in places that burn frequently. In New York State, it has been documented at the following places that contain the larval foodplants: 1) a powerline along a dry hill, 2) a dry slope containing mixed oak and beech woods, and 3) a rural roadside surrounded by mixed oak woods.

There are records of the Aureolaria seed borer from Rochester, the lower Hudson Valley, and Long Island. The most recent surveys for this species were conducted in the 1980s and documented three populations in Livingston County (1) and Suffolk County (2).

The Aureolaria seed borer is spottily distributed from southern Maine (historical) and the hills around Boston, Massachusetts, west across southern Ontario to southwestern Wisconsin, and Missouri, south into Florida and Texas.

The Aureolaria seed borer has dark orange wings. The outer edges of the wings, spots of the forewing, and shading of the hind wing vary from pale to very dark purple. The lines on the wings are jagged and blackish. The wingspan is approximately 25-33 mm (Covell 1984). Older larvae are very dark brown, stout, hairless, "cutworm" type caterpillars. The back is paler than the sides, and a dark line runs down the middle of the back. Younger larvae are a pale translucent tan (D. Schweitzer, personal communication).

Aureolaria seed borers spend most of their lives as underground pupae. Adult moths fly from late July into September and lay eggs. Larvae occur from early September until late October or early November. Young larvae feed internally in the capsules of the foodplants. Older larvae feed by chewing holes into the seed capsules, inserting their heads, and eating the contents. The larvae themselves usually remain on the capsules even when resting during the day and night. In the late fall the larvae go underground, where they stay as pupae until they emerge as adult moths the following late July (D. Schweitzer, personal communication).

In the northern part of its range, including New York State, adult Aureolaria seed borers fly from late July into September. In New York State, larvae have been found from early September until late October. Some larvae exist into November. The best time to see Aureolaria seed borers in New York State is from September to November, when larvae can be found by looking for holes, which are usually round and approximately 1-3 mm in diameter, in the stems or capsules of the foodplants, fern-leaf yellow false foxglove (A. pedicularia) and smooth yellow false foxglove (A. flava). The larvae themselves usually remain on the seed capsules, even when resting, and are easy to find during the day or night. Younger larvae feed internally in the capsules (D. Schweitzer, personal communication).

The time of year you would expect to find Aureolaria Seed Borer present, reproducing, and larvae present and active in New York.