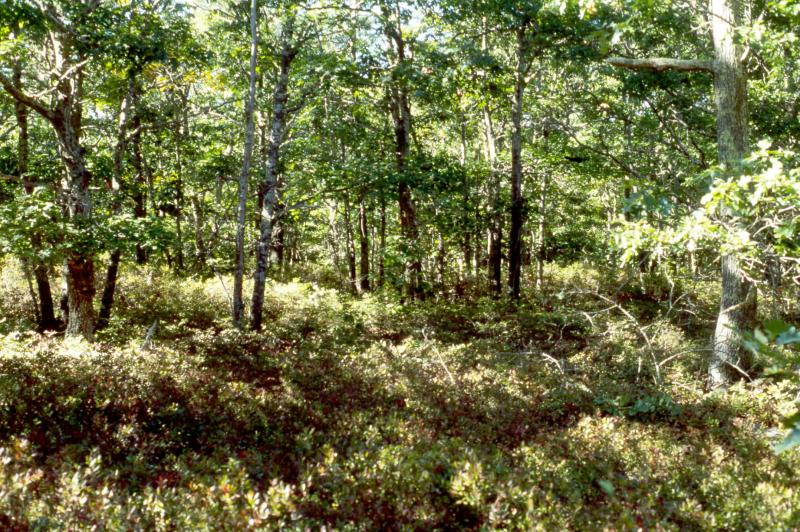 These coastal oak-heath forests provide critical wildlife food resources, including huckleberries and blueberries that ripen in the summer and mast acorns from oaks that mature in the fall. Wildlife biologists can estimate the size of the population of deer, wild turkey, and squirrel by monitoring the mast production of acorns from oaks. Mast food availability has also been found to reflect antler development and reproductive success among yearling deer. Mast production is influenced by many factors such as annual rainfall, wind, temperature, and weather events, which in turn can affect wildlife populations (Suchy 2006).

The numbers and acreage of coastal oak-heath forests in New York have moderately declined in recent decades. This decline is due to to displacement from residential and commercial development.

The numbers and acreage of coastal oak-heath forests have declined from historical numbers due to settlement of the area and the subsequent agricultural, residential, and commercial development.

The threats to the coastal oak-heath forest are many and varied: fragmentation of the forest by roads, trails, and powerlines causing a loss of the forest core; recreational, residential and commercial development; erosion from trails, roads, and trampling; fire suppression; and deer browse. This is a fire adapted community and the loss of regular fires would cause gradual successional changes to a different community type. Over-browsing by deer will also cause a change to the community by prohibiting the regeneration of tree canopy species.

To promote a dynamic forest mosaic, allow natural processes, including gap formation from blowdowns and tree mortality as well as in-place decomposition of fallen coarse woody debris and standing snags, to operate, particularly in mature and old growth examples (Spies and Turner 1999). Management efforts should focus on the control or local eradication of invasive plants and the reduction of white-tailed deer densities. Consider deer exclosures or population management, particularly if studies confirm that canopy species recruitment is being affected by heavy browse. Generally, management should focus on activities that help maintain regeneration of the species associated with this community. Deer have been shown to have negative effects on forest understories (Miller et al. 1992, Augustine and French 1998, Knight 2003) and management efforts should strive to ensure that tree and shrub seedlings are not so heavily browsed that they cannot replace overstory trees. If active forestry must occur, use silvicultural techniques and extended rotation intervals that promote regeneration of a diversity of canopy, subcanopy and shrub species over time (Busby et al. 2009) while avoiding or minimizing both short-term and persistent residual disturbances such as soil compaction, loss of canopy cover due to logging road construction, and the unintended introduction of invasive plants.

Research is needed to critically assess the long-term effects of heavy deer browse on this natural community. Research should focus on sapling and seedling regeneration of the forest canopy species particularly the oaks.

This natural community is restricted to interior portions of the coastal lowlands region away from direct maritime influence. Coastal oak-heath forests are concentrated on outwash plains and possibly knolls and mid to upper slopes of glacial moraines. The community range possibly extends westward into eastern Nassau County on the end moraine of western Long Island and has been reported from a narrow strip of outwash on the north shore of Long Island.

The range of this natural community is somewhat restricted. This community occurs in coastal areas from New Hampshire to New Jersey on rapidly drained soils north of the glacial border.

The forest is usually codominated by two or more species of oaks: scarlet oak (Quercus coccinea), white oak (Q. alba) and black oak (Q. velutina). Chestnut oak (Quercus montana) is also a common associate. Pitch pine (Pinus rigida) and trees of other genera, if present, typically occur at less than 1% cover each in the canopy. American chestnut (Castanea dentata) may have been a common associate in these forests prior to the chestnut blight; chestnut sprouts are still found in some stands. The shrublayer is well-developed typically with a low nearly continuous cover of dwarf heaths such as blueberries (Vaccinium pallidum, V. angustifolium) and black huckleberry (Gaylussacia baccata). The herbaceous layer is very sparse; characteristic species are bracken fern (Pteridium aquilinum), wintergreen (Gaultheria procumbens), and Pennsylvania sedge (Carex pensylvanica). Herb diversity is greatest in natural and artificial openings with species such as frostweed (Helianthemum canadense), false-foxglove (Aureolaria spp.), bearberry (Arctostaphylos uva-ursi), goat's-rue (Tephrosia virginiana), bush-clovers (Lespedeza spp.), and pinweeds (Lechea spp.).

A low diversity, large patch to matrix, hardwood forest dominated by oaks and hickories with a well developed short shrub layer dominated by huckleberries (Gaylussacia spp.) and blueberries (Vaccinium spp.). This natural community occurs on dry, well-drained, sandy soils of glacial outwash plains or moraines of the Atlantic Coastal Plain. It can occur with several types of barrens and woodland communities as part of the broadly defined ecosystem known as the Pine Barrens.

Known examples of this community have been found at elevations between 8 feet and 195 feet.

There are at least two times of the year when these forests are very interesting to visit. First, these forests provide critical habitat for migratory land birds in the fall and the best chance to see the most species and numbers occur after the passage of a cold front. Second, later in the fall after the migrant birds have left these forests and reached their non-breeding winter homes, brilliant red fall colors come alive in the dense heath layer underneath the rust colored leaves of oak trees. The heath species (blueberries and black huckleberries) ripen in the summer and become good snacks for hikers at this time of year. 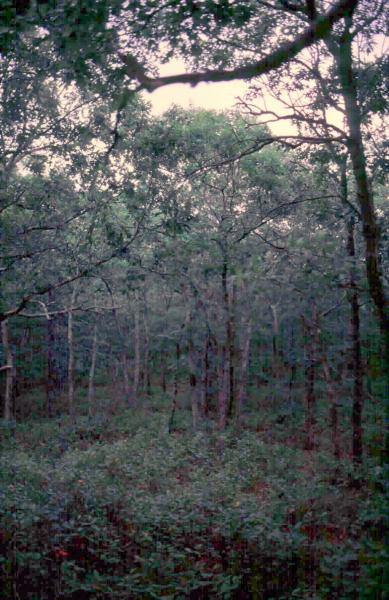 This figure helps visualize the structure and "look" or "feel" of a typical Coastal Oak-Heath Forest. Each bar represents the amount of "coverage" for all the species growing at that height. Because layers overlap (shrubs may grow under trees, for example), the shaded regions can add up to more than 100%.