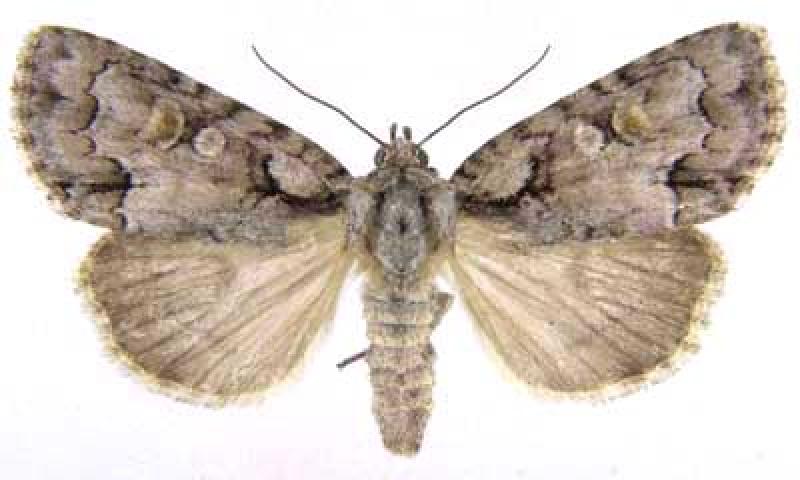 The Barrens Dagger Moth needs habitat patches at least 1,000 acres in size and most patches where this species occurs are between 2,000 and 10,000 acres.

The Albany population is very likely to be extirpated, since there has been no evidence of this species in many years, despite over two decades of survey effort, and therefore was considered historical in the state. The state rank was changed after a single individual was captured in the dwarf pine barrens of Long Island in 1999, suggesting that a population is present in the vicinity of the capture location. Additional records for this species are all pre-1900. The precise habitat is poorly understood, which makes locating it in places where general pine barrens vegetation is somewhat widespread, like on Long Island, difficult.

The short-term trend is unknown on Long Island and there is no evidence that the species is extant elsewhwere in New York.

This species has disappeared from the Albany area and probably elsewhere, but the original range in New York is not known.

The decline of this species in the northeast suggests unknown threats and the causes of decline regionally are also unknown. Known threats include development and fire suppression, although the threat of development for the remaining habitat on Long Island may be low. Fire could also pose a threat to isolated populations if an extensive fire burned a large area of habitat at one time. On a local scale, severe defoliation of oaks by spongy moth (Lymantria dispar) outbreaks could cause large scale starvation of Barrens Dagger Moth larvae. Efforts to suppress spongy moths, such as the use of Bt (Bacillus thuringiensis - a bacterial biological control used on spongy moth caterpillars), are likely beneficial to this species. The timing of spraying should negate harm to this species, as the residue would be gone prior to the appearance of the first eggs or larvae. It is possible that introduced parasitoids such as Compsilura have impacted this species and a few others in the genus, such as Acronicta subachrea, that have largely disappeared in the Northeast. However, several very similar species remain widespread and common.

Burning is needed to maintain the habitat for this species, but it should be done in patches and in no case should the entire occurrence be burned during any season. Burning should be minimized between 1 June and 1 October.

Better information on the impacts of spongy moth outbreaks and introduced parasitoids on this species is needed. A clearer understanding of essential habitat parameters is essential. Research to determine if more frequent fires improves habitat quality is also needed.

The documented habitats in New York are pitch pine (Pinus rigida) - scrub oak (Quercus ilicifolia) barrens including dwarf pine plains. Most habitats from Massachusetts to North Carolina are also dry sandy pine-oak scrub. However, there are obviously more specific needs since most of this type of habitat in most parts of the range is unoccupied. In Ontario, the habitat is oak woodland or perhaps degraded oak savanna. At least in the eastern part of the range, this species is seldom, if ever, persistent in habitat remnants less than 1,000 acres in size and most occurrences are two to ten times that size.

The species has been found in the Albany Pine Bush and on Long Island. It could possibly turn up in the Buffalo region in sandy oak woods. The best current information suggests that this could be restricted to a limited part of Long Island. The nearest occurrences outside of New York are in the Grand Bend-Port Franks region of Ontario, Canada where this moth is quite rare, and in southeastern Massachusetts and southern New Jersey with several extant occurrences each, and at least one occurrence in North Carolina.

This species is historically scattered from Massachusetts to Manitoba to North Carolina, Oklahoma, Colorado and New Mexico. It is extant in Missouri (apparently still widespread), southern Ontario (one site), Massachusetts (about three sites), Virginia (one specimen out of habitat), Long Island, New York, southern New Jersey (three known sites, more likely exist), and in eastern North Carolina. It is apparently extirpated, or at least historical, from some states such as Connecticut (formerly widespread), Pennsylvania, and mainland New York. There is no current information for Manitoba, Oklahoma, Colorado, or New Mexico. There are enormous gaps in the known range, such as one including most of Pennsylvania, all of Delaware, Maryland, Ohio, West Virginia, Kentucky, Michigan, Indiana, Illinois, Wisconsin, and Minnesota. Therefore, the historical range might be better stated as Massachusetts and eastern New York to eastern North Carolina, and Missouri to New Mexico, with isolated populations in Ontario (on Lake Huron) and in Manitoba.

This is a small dagger moth, about the size of the common Acronicta ovata. The adult does not vary much except in the extent of dark on the hindwings. The larva has not been described in detail, but is similar to related species such as Acronicta ovata, and the Acronicta increta complex.

This species is difficult to identify and must be verified by an expert. A collected specimen is very strongly recommended since a field photo taken at night under artificial light could leave room for doubt.

The realtively smooth, slate gray color of the forewing is distinctive to one familiar with the group. Note the conspicuously brown to slightly orange reniform spot, prominent rounded orbicular spot containing a darker spot, dark brownish hindwing of female, and almost white hindwing with dark veins on most males. A few males have the outer portion of the hindwing somewhat rust tinted and this is quite distinctive. Specimens suspected to be this species should be confirmed by an expert. The larva is similar to some other species in the Acronicta ovata group, a small North American group of this holarctic genus, and should be reared to an adult for confirmation. This moth is illustrated by Holland (1903), Rings et al. (1992), and Rockburne and Lafontaine (1976).

The best life stage for identification is the adult stage. Identification should be based on an actual specimen and be confirmed by an expert.

The adults are nocturnal and are most often found at lights, but they do sometimes show up at bait.

The caterpillar feeds on summer foliage of scrub oak (Quercus ilicifolia), bur oak (Quercus macrocarpa), post oak (Quercus stellata), dwarf chestnut oak (Quercus prinus), and probably black oak (Quercus velutina). As with most moths, it is unknown what the adults feed on, but their diet most likely includes honey dew on leaves from aphids and other sucking insects and sap oozes on trees.

The adults likely occur in New York from approximately mid-June to at least mid-July and probably into early August. The egg stage is only about six days and the larvae mature in about 29 to 35 days (Dale Schweitzer), so the larvae would be present from about late June through August or into September. There probably is not a second brood in New York. Adult eclosion (emerging from the pupal case) is quite staggered and the pupae are present almost the entire year.

The time of year you would expect to find Barrens Dagger Moth reproducing, larvae present and active, and pupae or prepupae present in New York.

Other than the slight possibility that southwestern United States populations are a different species, there are no taxonomic issues with this species.

This guide was authored by: Dale F. Schweitzer