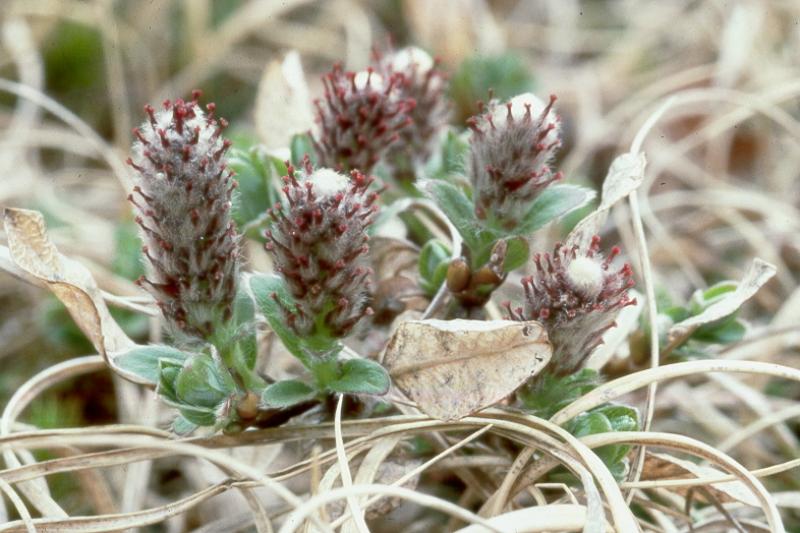 Frederick Pursh, who described this species, noted that its habit and leaves resemble those of the bearberry plant (Arctostaphylos uva-ursi). Therefore he used the species name uva-ursi, which means bearberry, for this species. Pursh also wrote that this is a "beautiful little species." Edward Tuckerman, a 19th-century botanist from Amherst College, did not think Pursh had adequately described the species, and renamed it Salix cutleri, after Reverend Manassah Cutler, an 18th-century botanist and congressman from Massachusetts. Pursh's original name was restored by willow expert M. S. Bebb (Bebb 1989).

There are 11 known populations all of which are known from the high peaks in the Adirondacks. One population, which is close to another one and may be considered only a sub-population, is believed to be extirpated. Some populations are threatened by trampling from hiker traffic.

One population or sub-population appears to have become extirpated within the past 20 years. Overall, short-term trends are unclear but may indicate a slight decline.

Only one population or sub-population appears to have become extirpated within the past 20 years. About five of the eleven extant populations are known to have been extant for the past 100 years. Overall, long-term trends are unclear but probably indicate at least a slight decline.

At many sites trampling by hiker traffic threatens at least parts of the populations.

Clear, consistent, and regular data on the size of populations is needed to better assess the trends of this species. Left unchecked, global climate change is an additional threat.

In New York, this species is only known from the high peaks region of the Adirondacks in Essex County.

This species is an arctic-alpine North American endemic. It occurs from Nunavut east to Greenland and south to Quebec and the mountains of northern New England and New York (Argus 2005).

Bearberry willow is a low shrub that forms dense mats 1-5 cm tall and 20-90 cm across. The stout branches are prostrate and trail along the ground. The elliptic leaves are up to 3/4 inches long and have teeth along the margins that are green, shiney and rarely slightly hairy above and whitish below. Like all willows, the flowers are small and occur in tight clusters called catkins. Catkins are composed entirely of either male or female flowers and individual plants have either all male or all female catkins. This species flowers as the leaves are opening. Female catkins are about 1/2 to 2 inches long and stand erect among the leaves. The white to red female flowers develop into capsules which are less than 1/4 inches long, and not hairy (Fernald 1970, Argus 2005).

Salix uva-ursi is a matted dwarf shrub that forms colonies by layering and is only 1-5 cm tall. The branches and stems often are horizontal and prostrate. The leaves are broadly ovate to oblanceolate or elliptic, glandular-serrulate to glandular-crenate, the apices are acute to acuminate, and the blades are 4-23 mm long. The adaxial leaf surfaces are green and shining while the abaxial surfaces are glaucous and usually glabrous. There is one stamen per staminate flower.

This species can easily be identified vegetatively when the leaves are fully expanded. Information on habitat and habit are particularly useful and should be noted along with the color of the abaxial surface.

Salix pyrifolia is a taller willow but often occurs in high elevation sites. It can be distinguished by its height (0.4-4.0 m tall) and non-prostrate growth habit, and by its two stamens per staminate flower.

This species has mature foliage by mid-June and the leaves last through September. Therefore, the best time to survey for this species is during this time period.

The time of year you would expect to find Bearberry Willow vegetative, flowering, and fruiting in New York.

The hybrid Salix x peasei (Salix herbacea x S. uva-ursi) is known from New Hampshire and areas to the north, but has never been reported from New York (Fernald 1970, Argus 2005).