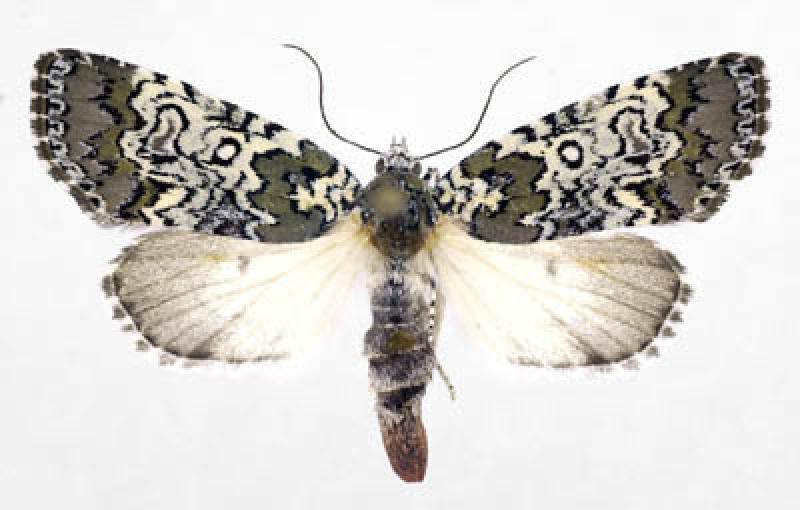 The bird dropping moth has likely been extripated from the Horseheads and Ithaca areas in New York, but the species is still present in the Albany Pine Bush.

Beyond the loss of habitat, the reasons this moth seems to be so rare are largely unknown. There is only one known occurrence in New York, although based on the availability of potential habitat and foodplants there should be at least a few more occurrences in New York.

The species has been stable or slightly declining at the Albany Pine Bush, but is still fairly common there.

This moth probably does not still occur in the Horseheads or Ithaca, New York areas and it has declined substantially in New England. However, no reliable information exists on long-term trends, except at the Albany Pine Bush where the population appears stable although most of the original habitat is gone.

Besides habitat destruction from development, the threats could include either too much or too little fire and it is not clear how well suited the current fire management practices at the Albany Pine Bush is for this species. It is possible that this species is found mostly in places that have not burned recently where the foodplants have become fairly large, but it is not likely that this moth would do well in a closed canopy forest. This species may thrive on the sprouts of the foodplant after fires. Spongy moth (Lymantria dispar) spraying with chemical biocides is a severe threat. Spongy moth spraying could also be a threat with Bt (Bacillus thuringiensis - a bacterial biological control used on spongy moth caterpillars), but this isn't certain. Deer could be a significant threat if they browse on the sprouts of the foodplant after fires.

The precise needs of this moth are not well known and monitoring needs to be initiated at the single known location in New York. The species pupates in dead wood, where it is vulnerable to fire during most of the year, although the habitat needs occasional fires in order to persist.

The effects of prescribed burning on this species need to be evaluated since it is one of the few pine barrens specialists that is, or recently was, still doing well in the Albany Pine Bush. Research issues include examining the suitability of pupation sites after fires, whether the species will quickly recolonize foodplant sprouts after fires and, if not, how long does it take for the habitat to become suitable again.

In New York, this species inhabits pine barrens in the Albany Pine Bush. Habitats in New England also tend to be sandy and are sometimes pine barrens. The habitat for the historical Ithaca collections is unknown. While it is uncertain, the Horseheads, New York site was probably acid, shaly, ridgetop woods. In almost all parts of the range, this moth is much more localized and habitat-restricted than the local foodplant, which is usually Fire Cherry (Prunus pensylvanica) in New York and New England.

Historical locations exist from Horseheads and Ithaca, New York and the species is extant in the Albany Pine Bush. The foodplant, Fire Cherry (Prunus pensylvanica), is widespread and although a large majority of stands of this tree are undoubtedly unoccupied, populations of this moth could turn up elsewhere.

The entire global range is not well known. This is primarily a southern species in the United States, even though most specimens come from well collected northern areas. The general range is from southern Canada south to Florida and Texas, but it is absent in large parts of this area (e.g., apparently most of southern New England, historical in Massachusetts, and southern New York, New Jersey, Pennsylvania, Delaware, Maryland, most of Ohio (one pre-1900 occurrence) and most or all of West Virginia and Virginia). It is also absent, especially northward, from the majority of seemingly suitable habitats even in states where it is present. In addition, most states with any known localities have very few populations. Other than Wisconsin, there are probably no states with more than five known recent occurrences.

This species is extremely distinctive in the adult stage. See illustrations such as Rockburne and LaFontaine (1976) and Rings et al. (1992). The larva is mottled, rather purplish, with sparse long hair.

This is a very easily recognized species. However, with no published illustrations, larvae or photographs of larvae, should be identified by experts familiar with it, such as Tim McCabe (New York State Museum), David Wagner (University of Connecticut), or Dale Schweitzer (The Nature Conservancy / NatureServe).

The adults are nocturnal and are collected at lights.

The larvae feed on young leaves of Fire Cherry (also known as Pin Cherry - Prunus pensylvanica), in New York. While they do not accept the common wild Black Cherry (Prunus serotina), it is possible that other species of native cherries, plums, or hawthorns (Crataegus spp.) are also used.

The flight season could vary from year to year, but generally early June is the adult peak and most larvae probably finish by early July in the Albany Pine Bush.

The time of year you would expect to find Bird Dropping Moth reproducing, larvae present and active, and pupae or prepupae present in New York.

This is a small genus and there are are only two species in New York. It is rarely misidentified.