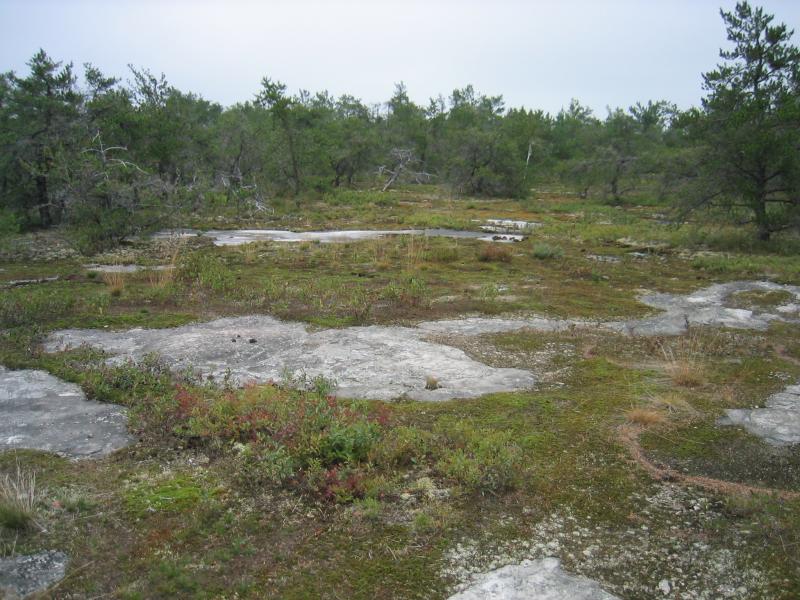 It is believed that the Potsdam Sandstone bedrock of these barrens was exposed with catastrophic flooding from the abrupt drainage of Glacial Lake Iroquois during deglaciation, roughly 11,000 years ago. This flooding stripped away much of the soil and unconsolidated material that had previously covered the underlying bedrock (Franzi and Adams 1999). "Potsdam Sandstone" was named by geologist Ebenezer Emmons in 1838 for Potsdam in St. Lawrence County, NY (Emmons 1838).

There are probably less than two dozen occurrences statewide. A few documented occurrences have good viability and a few are protected on public land or private conservation land. This community is limited to the regions of the state underlain with Potsdam Sandstone, and there are only a few high quality examples. The current trend of this community is probably stable for occurrences on private conservation land and public land, or declining slightly elsewhere due to moderate threats that include wildfire suppression, invasive plants, quarrying, excessive ATV use, excessive logging, and trash dumping.

The number and acreage of sandstone pavement barrens in New York have probably declined slightly in recent decades due to fire suppression, disturbance by off-road vehicles, trash dumping, and development.

The number and acreage of sandstone pavement barrens in New York have probably had moderate declines from historical numbers due to fire suppression, fragmentation, disturbance by off-road vehicles, trash dumping, and development.

Loss of Jack pine dominance due to wildfire suppression and the invasion and spread of exotic plants are the primary threats to sandstone pavement barrens. Quarrying, excessive ATV use, excessive logging, and trash dumping are secondary threats. Protected occurrences should be monitored for the invasion of Southern Pine Beetle.

Soils are very thin or lacking in and around this community and the effect of clearing and construction on soil retention and erosion must be considered during any development activities. Similarly, these soils are acidic and nutrient-poor and any soil enrichment contamination (e.g., from septic leach fields and fertilized lawns) may alter community structure and function. The open structure of this community is maintained by fire and presents a fire hazard to existing and proposed development. Unprotected structures located within or near this community are more susceptible to damage from fire.

Periodic inventory of the sandstone pavement barrens is needed in order to keep occurrence data current. Need more thorough inventory of the best sites, especially including identification of mosses, lichens, and fauna.

Determine the optimal fire regime for this community. The effect of prescribed burning needs to be evaluated. Evaluate the success of mechanical removal of woody plants in areas where fire is prohibited.

This community is a narrow regional endemic that is possibly restricted to the northernmost counties of New York, north of the Adirondack Mountains in the northeastern portion of the Great Lakes Ecoregion, where the bedrock is sandstone. It is concentrated in the Champlain Valley of Clinton and Essex Counties where it reaches large patch size. Several small patch occurrences are reported from the Eastern Ontario and St. Lawrence Lowlands including islands in the Thousand Islands Region. Additional occurrences are suspected from within Lake George.

This community is possibly restricted to the northeastern portion of the Great Lakes basin and parts of Maine. It may extend into northern and central Canada. The narrowly defined jack pine (Pinus banksiana) dominated barrens are known from northeastern New York, southern Quebec and Maine. Similar communities may also occur in Ontario, Minnesota, and Iowa.

A terrestrial open canopied (averaging 25 -60% cover) woodland that occurs on very shallow soils (dysic lithic borofolist) over sandstone bedrock; this community is best developed where the bedrock is nearly level, thus forming a pavement. Fire is the most important ecological process for the maintenance of healthy sandstone pavement barren communities (Stergas and Adams 1989, Hawver 1993). Other disturbances that have influenced these barrens include blow downs, ice storms, and subsequent restoration cutting. Physiognomic variants such as exposed bedrock, open heath shrubs, sparse woodland, and closed canopy forest reflect the disturbance history of a given site.

Known examples of this community have been found at elevations between 27 feet and 1,005 feet.

In late summer and early fall the shrublayer and hardwood trees turn warm shades of yellow, red, and scarlet which provides a lovely contrast to the greens of the pines. 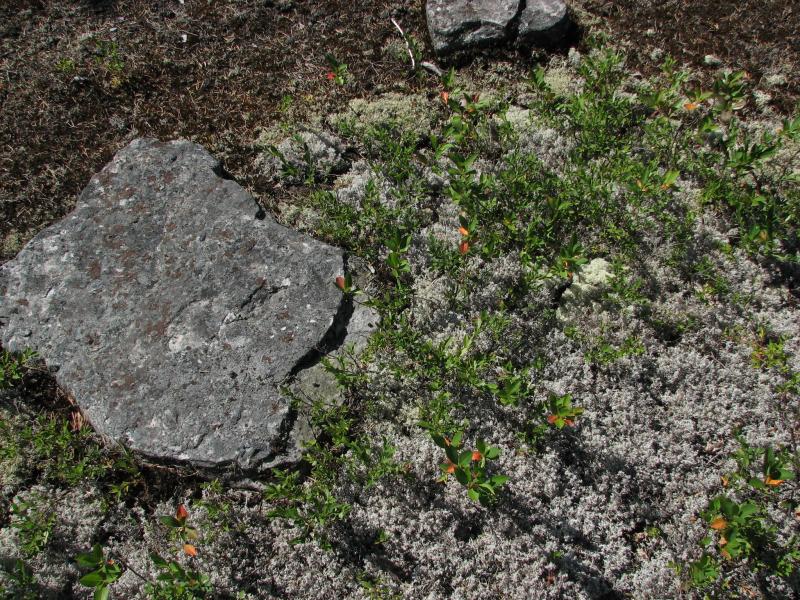 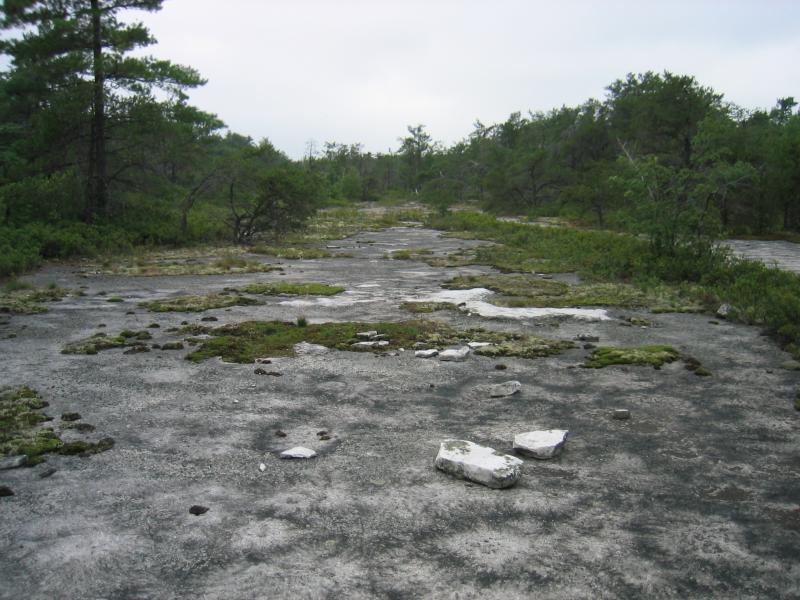 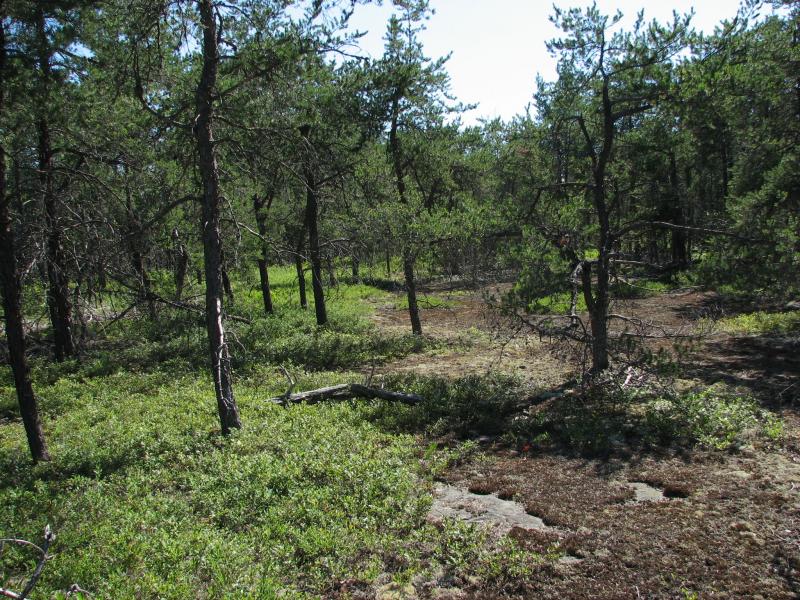 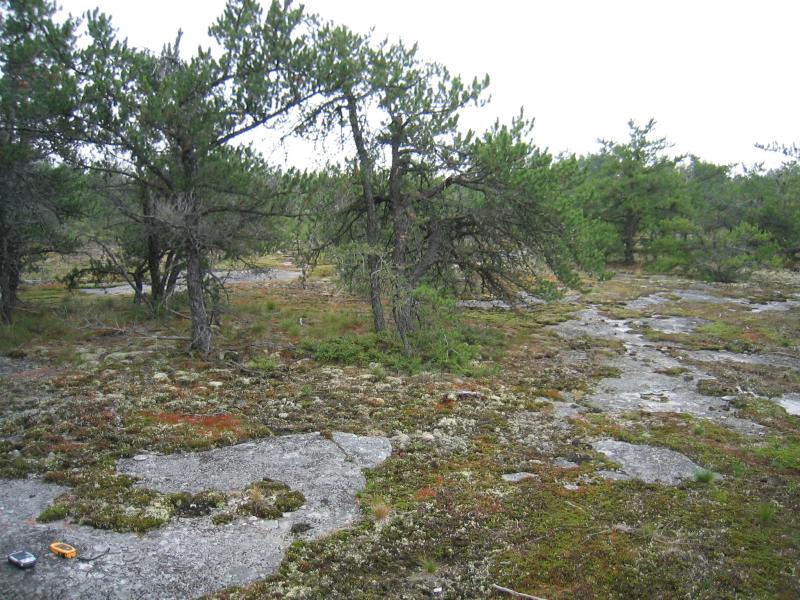 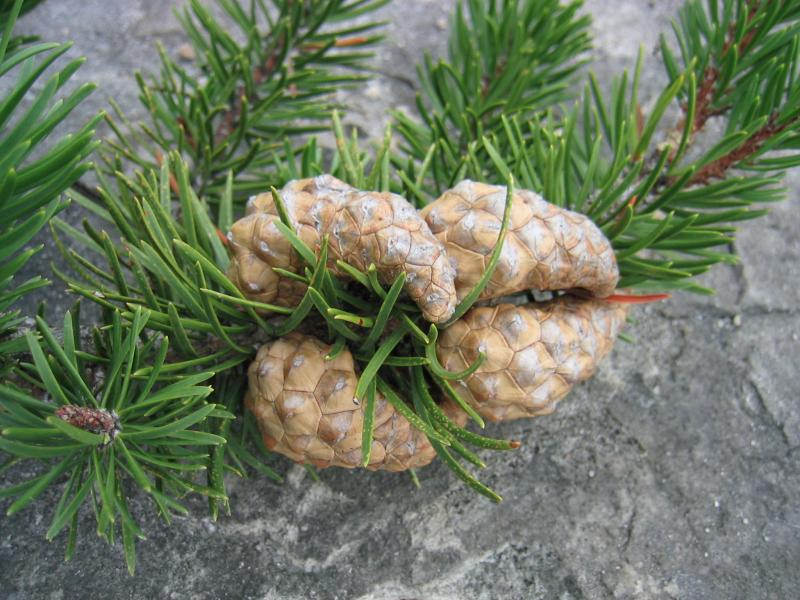 This figure helps visualize the structure and "look" or "feel" of a typical Sandstone Pavement Barrens. Each bar represents the amount of "coverage" for all the species growing at that height. Because layers overlap (shrubs may grow under trees, for example), the shaded regions can add up to more than 100%.