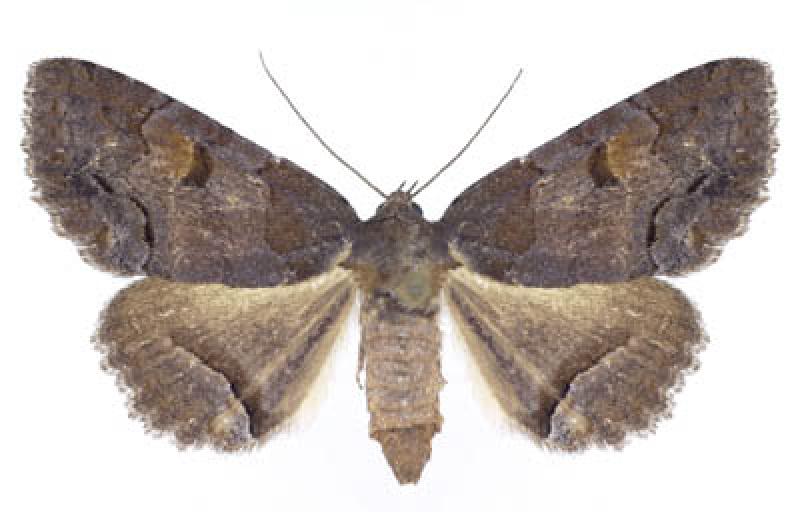 Zale curema inhabits pitch pine stands and the larvae feed on the new growth of the needles.

The lack of current information on this moth, especially the uncertainty as to whether it even occurs on Long Island, does not allow a state rank to be assigned and, although this species is not imminently imperiled, it probably has a limited range in New York State.

The short-term trends indicate that this species is stable or declining (possible decline of 10% to 30%).

The only known threat is habitat loss to development. This species does not need intact pine barrens and, as long as Pitch Pine (Pinus rigida) remains abundant, populations should not be affected much by management activities. Gypsy Moth (Lymantria dispar) spraying would be a threat if chemical biocides were used. However, given that Bt (Bacillus thuringiensis - a bacterial biological control used on Gypsy Moth caterpillars) generally remains lethal for about a week or less, and given the staggered phenology and long oviposition season of Zale curema, it is very unlikely that a single application of Bt could cause the extirpation of a population, even if the larvae are highly sensitive to it.

Refugia, or unburned areas, are needed during prescribed burns, since most of the pupae in the leaf litter or humus layer would probably be killed during a fire. Gypsy Moth (Lymantria dispar) spraying should be avoided or, if control is necessary, Bt (Bacillus thuringiensis - a bacterial biological control used on Gypsy Moth caterpillars) should be used.

Zale curema requires stands of pitch pine (Pinus rigida), but not necessarily pine barrens. In other states, this species has been found in forests with abundant pitch pine.

Recent records for this species are from the Shawangunk Ridge and the Albany Pine Bush. It should also occur on Long Island, since Cape Cod area and eastern Pennsylvania are major strongholds. Forbes (1954) indicates that this species was present in central New York, but these specimens should be verified.

This species is somewhat common in the Cape Cod region of Massachusetts. Otherwise, it is found scattered in major northern pitch pine (Pinus rigida) areas including Concord, New Hampshire, Albany, New York, potentially on Long Island, New York, formerly eastern Connecticut, potentially Rhode Island, and the Poconos and Chester County barrens of Pennsylvania. A single record for Rockridge County, Virginia and historical records for Tryon and Raleigh, North Carolina suggest a potentially wide range in the undercollected southern Appalachians. It also occurs extremely rarely along the western edges of the New Jersey Pine Barrens, but so rarely and at such long intervals as to raise the question of whether it is really established there. Perhaps it merely gets temporarily established in this enormous expanse of seemingly perfect habitat, but cannot withstand the warmer climate there. There are numerous false records in the literature, as this species is sometimes confused with Zale confusa and Zale helata.

A medium sized, brownish, late spring pine feeding moth with green and white striped larvae that are similar to other Zale larvae.

This species needs to be verified by an expert as it is very commonly misidentified. The species is difficult to characterize, and specimens illustrated as Zale curema by Rings et al. (1992; Plate XII:26, 27) are southern Zale helata. Northern (e.g. New York) specimens of Zale helata are more similar to Zale curema and Zale metatoides is also a similar species. Besides genitalia characters given by Forbes (1954), the color is somewhat distinctive. This moth is a rather dark purplish color, with the lines blackish, but not as prominent as in southern Zale helata, the reniform spot on the forewing is contrastingly black, and there is usually no white spot on the forewing. Zale curema will almost always occur with Zale helata and Zale metatoides and their flight seasons are nearly the same. The larva is similar to other green and white striped Zale larvae and is illustrated by Maier et al. (2004). It is not certain whether the larvae can be reliably identified to species. The adults should be verified from actual specimens by genitalia and wing characters, although good photographs might suffice.

The genitalia of either sex is used as the identifying characteristic. A few experts can determine the species based on the wing color by comparison to a series of the similar species. Even an expert will have difficulty identifying this species reliably on bait or at lights at night, so one should always collect several suspected specimens in order to identify new occurrences.

Identification should be based on the adults, although the last instar (stage) larvae have been illustrated and possibly can be identified.

The adults are nocturnal and are usually collected at bait, but they may also show up at lights with persistent survey effort.

The adults occur during most of May into about mid-June, and possibly occur in very late April. There is no second brood anywhere in the range. The larvae occur on Pitch Pine (Pinus rigida) from about mid or late May through July. Most of the year is spent as pupae in the leaf litter or humus layer.

The time of year you would expect to find Black-eyed Zale reproducing, larvae present and active, and pupae or prepupae present in New York.