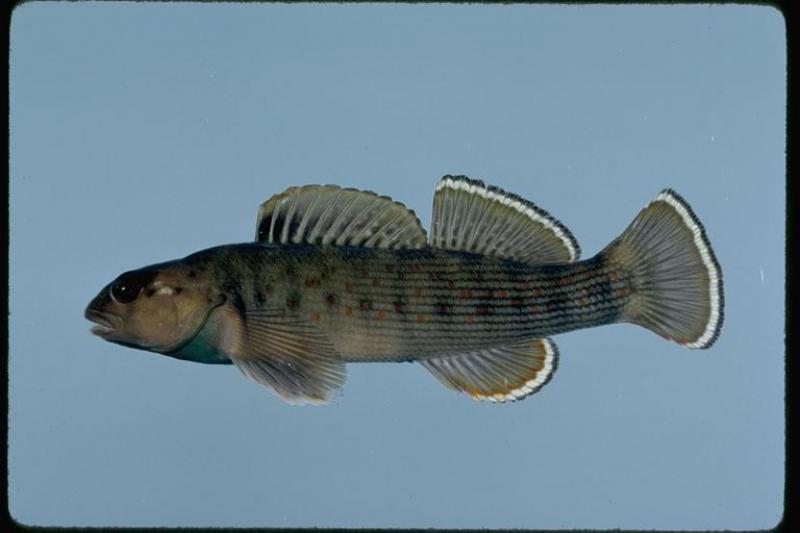 The presence of Bluebreast Darter indicates good water quality and stream habitat because of their low tolerance for siltation and pollution.

There is a single population in New York that is in the Allegheny River and Oswayo Creek. The population size is unknown at this time. Fish are found infrequently and in low numbers.

There is a single population of Bluebreast Darters in New York. The known range has expanded within the Allegheny River and Oswayo Creek in the last decade. The expansion could be a result of using a new survey method in the Allegheny River, electrified trawling survey, or the population may be rebounding as water quality improves (pers comm Lisa Holst NYS DEC 2017). Fish are found infrequently (Carlson et al. 2016).

This species was first documented in 1973 (Smith 1985, Carlson et al. 2016). It is possible that the species was not found previously because it was not there or because it was historically present in low numbers, but not detected. This species is infrequently found (Carlson et al. 2016). The Allegheny sub-watershed is trending toward aforestation (New York State Department of Environmental Conservation 2005).

This species does not tolerate even modest siltation. Pollution which leads to major fish kills is also a serious threat. Pollution could also impact their main food source: aquatic insect larvae. The construction of the Kinzua Dam in Pennsylvania prohibits upstream migration from the lower section of the Allegheny River (Carlson 1998). In addition, any alterations to the water flow and temperature could reduce suitable spawning habitat. Removal of large boulders, rocks, or gravel could impact non-breeding and spawning populations.

Siltation is not tolerated by Bluebreast Darter. Measures are needed to reduce runoff into areas used by the fish. When construction is needed near water systems, measures should be taken to reduce siltation as much as possible. This could include disturbing only the work area to maintain as much vegetation as possible to reduce runoff, working in phases to allow for more centralized control of sedimentation, using sediment traps or ditches to direct runoff away from the river, stabilizing soil by seeding, mulching, use of blankets, or wool binders. Protect slopes by using silt fences or fiber rolls. Logging and farming practices near waters can increase siltation or pollution. Encourage practices that maintain a riparian buffer to control pollution.
Gravel and boulders should not be disturbed or removed from the river as they are necessary for spawning and provide refuge from predators.
Water temperature and flow are important for Bluebreast Darters. Any alteration to the flow of water may affect upstream movement to spawning areas. Consider removing any barriers to allow free movement from non-breeding areas (deeper pools) to spawning areas (swift riffles).

Some research suggests that Bluebreast Darters are a host for several freshwater mussel species, including Villosa iris (rainbow mussel), a rare species in New York (Tiemann 2008). Additional research on the relationship between darters and freshwater mussels in the Allegheny River is suggested.

Bluebreast Darters are known from two waters in the Allegheny watershed: Allegheny River and Oswayo Creek.

Bluebreast Darters are found in the Ohio River basin from the Tennessee and Cumberland drainages in Tennessee, western Virginia, Kentucky, and Alabama, to the Vermillion River in eastern Illinois and Tippecanoe River in Indiana, east to the Kanawha and Monongahela rivers in West Virginia and upper Allegheny River in Pennsylvania and western New York (Lee et al. 1980, Mettee et al. 1996, Page and Burr 2011). This species is absent from most rivers within this range (Page and Burr 1991).

Bluebreast Darter is a deep-bodied, compressed fish with a blunt, rounded nose. The breast is typically dark blue to blue-green.

Bluebreast Darters are a moderately elongate, compressed fish with a deep caudal peduncle. Adults reach approximately 76 mm (3 in) in length. The upper profile is slightly more curved than the ventral profile. The body color is yellowish olive, but is lighter below. The lateral line is complete. There are irregular dark patches of one to four scales and scattered red scales on the sides. Mature males have bright red spots on the sides and a bright blue-black belly and ventral surface of the head. Some individuals will have eight to twelve conspicuous vertical bands or mid-lateral spots. Females are similar, but less brightly colored. Juveniles are similar to adults. The dorsal fin is contiguous, connected by a low keel of membrane. The spiny dorsal is arched with interspinous membranes a little incised. The soft dorsal fin is high anteriorly. The last rays are about half the length of the first and its margin is nearly straight. The first dorsal fin is dusky except for a light submarginal band. The caudal fin is nearly square. There are two white spots that are about the size of the pupil at the base of the caudal fin. Pectoral fins are asymmetrical, bluntly pointed, and the base is nearly vertical. The soft dorsal, anal, and caudal fins are dusky at the base with a dark marginal band and white along the edge of these fins. Gill membranes are separate. The mouth is low and horizontal with the jaw reaching to below the front of the eye.

Bluebreast Darter has a blunt, rounded snout, gill covers that are not connected across the breast. Breeding males have orange-tinted dorsal fins, small crimson spots on the sides, and a bright blue breast.

It is easiest to identify adults.

The males guard a small spawning territory until the eggs hatch. There is no parental care of the young.

This species hides behind boulders or large rocks for protection from predators. Spawning adults are found in riffles when water temperatures range from 21°-24°C (Stauffer et al 2016). Non-breeding individuals are in deeper water.

The time of year you would expect to find Bluebreast Darter active and reproducing in New York.