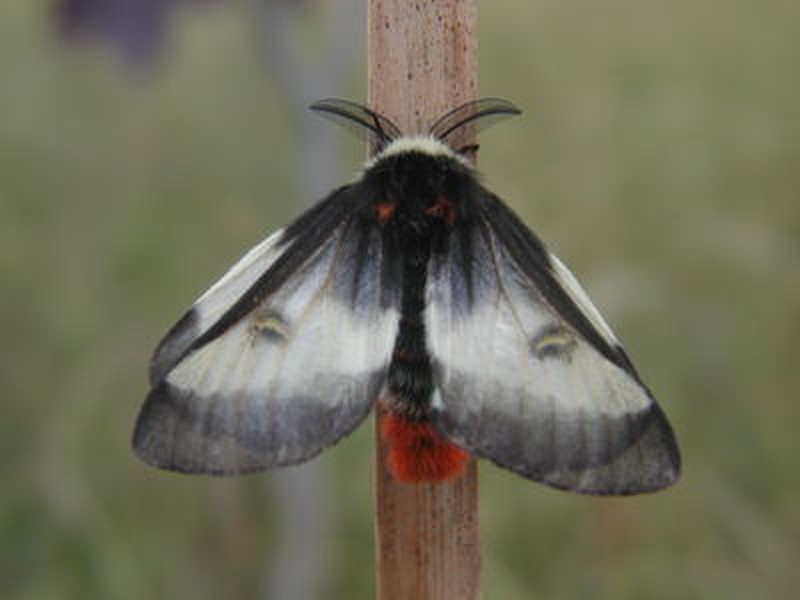 Bog Buckmoths do not feed in the adult stage, flying just a short period (typically 9-12 days) between mid-September to mid-October (Tuskes et al. 1996, Stanton 1998). They are some of the few adult moths in NY that fly during the day. Larvae (caterpillars) are voracious feeders and feed mainly on the plant bog buckbean (Menyanthes trifoliata), which is where they get their name.

There are six known locations in NY, all restricted to a single county (Oswego). While populations for this species are known to fluctuate over time, only two sites maintain a somwhat stable population, two sites have shown a decline in population in recent years and two appear to be extirpated (see trend information). In addition, all populations have significant threats to their habitats.

One fen with the best current population is recovering from a flooding-induced crash in 2017. Another site showing extreme fluctuation over long-term was not found in 2014 or 2016 (not surveyed in 2015), but 2 moths were observed in 2018. A site that was considered stable crashed in 2016 and 2017 for unknown reasons and no moths were found in 2018. One site has had no moths observed since 2007. The last two sites have had no moths observed since 2003 and 2013 respectively, and are believed to be extirpated due to loss of habitat to succession (Bonanno pers. comm., New York Natural Heritage Program 2019).

Bog Buckmoths were recently named (1977) and New York populations have been monitored since 1998 using a standardized protocol (Bonnano and White 2011). Populations of moths in the genus Hemileuca are known to fluctuate over several years (Steele and Peigler 2015). Three of the fens showed a somewhat stable but fluctuating population until recent years, one site has had no moths observed since 2007, and two sites have had no moths observed in recent years and are believed to be extirpated due to habitat succession (Bonanno pers. comm., New York Natural Heritage Program 2019).

Habitat change is a significant threat to the species in New York. Hydrological alteration due to water level regulation has constrained the water level range in Lake Ontario to 4 ft, rather than the historical 8 ft range (Wilcox et al. 1993). Two known sites, which lie directly adjacent to a stream that drains to Lake Ontario, have experienced dramatic expansion of cattails in the 50+ years since regulation began (Distler 2010). Hydrological alteration can lead to habitat succession as drier habitat can promote shrub and/or Sphagnum growth, decreasing M. trifoliata at sites (Stanton 1998, Distler 2010). Surface flooding is also a threat to this species, which presumably caused a population crash at two of the fens in recent years (Bonanno pers. comm.). Nutrient enrichment from runoff from adjacent developed areas is a threat to one or more of the sites as increased nitrogen and phosphorus levels can lead to vegetation growth, especially that of the invasive plant Phragmites (Bailey 1998, Bedford and Godwin 2003). Other invasive plants such as purple loosestrife and glossy buckthorn may also impact bog buckmoth habitat by outcompeting host plants (Bonanno and White 2011, Gradish and Tonge 2011). Extreme swings of weather (as seen in the winter of 2007-2008), excessive flooding (a threat to pupae and eggs), and extended dry periods (may support woody succession) are predicted to occur with climate change and could adversely affect the Bog Buckmoth (Stanton 1998, Kelsall and Leopold 2004). During the egg life stage, in addition to flooding, parasitoid wasps, dessication, and predation by rodents and birds are threats (Bonanno and White 2011). Larval parasitoids, such as wasps in the family Ichumonidae, are reportedly common among the buckmoths, have been rarely seen in the New York populations (Tuskes et al. 1996, Stanton 1999). A Texas study found parasitoides from the fly family Tachinidae and the wasp family Braconidae infecting Hemileuca larvae (Steele and Peigler 2015). Pupal predation can cause significant declines as well and potential predators on adults at the NY sites include mites, birds, araneid spiders, dragonflies, and carp (Pryor 1998, Stanton 1998). Low dispersal ability of adult gravid females makes colonizing new sites of suitable habitat (even relatively closeby) unlikely (Bonanno and White 2011). However, Buckner, Welsh, and Sime (2014) compared genetic variation between two of the NY sites and genetic diversity within sites and found evidence that there may be some gene flow between populations, suggesting that recolonization may be possible. Dupuis et al. (2018) found the NY population of Bog Buckmoth exhibits high relative genetic divergence compared to other ecologically divergent populations within the H. maia complex, which they best explained by its geographic isolation which limits gene flow. Pesticide spraying, especially for mosquito and spongy moths could be a threat, depending on timing and concentration (NatureServe 2019). Bog Buckmoths are extremely vulnerable to extirpation at New York sites due to all these threats and their extreme rarity and fluctuating populations.

Habitat management is needed at most sites in order to maintain open fen habitat with the larval host plant, Bog Buckbean (Menyanthes trifoliata). Habitat restoration is needed at degraded sites, which may entail activities such as restoring flow, removal of cattails and invasive plants (purple loosestrife, glossy buckthorn, and Phragmites australis), and using herbivores, culverts, and management of beaver control structures to maintain hydrology and open areas. This will require cooperation of farmers, local municipalities, and adjacent landowners. Maintaining appropriate hydrology may allow for restoration of M. trifoliata; however, results from research on foodplant restoration experiments may provide other prescriptions for maintaining or restoring the appropriate percent cover of M. trifoliata. Abundant fine woody or sturdy herbaceous stems are needed at the sites for oviposition, and a peat mat needs to be maintained for proper pupation. All of this management will need to be done with the minimum amount of equipment and traffic (human and herbivore) to keep the disturbance to these fragile fens low. Known Bog Buckmoth populations need to be monitored on a regular basis to determine population trends so this monitoring should continue and vegetation monitoring needs to begin to determine successional changes and habitat suitability (Bonanno and White 2011).

Research is needed on buckmoth ecology relating to plant selection by adult females for oviposition, larval behaviors and causes of first instar larval starvation. In addition, abundance patterns of the larval host, Menyanthes trifoliata, to Bog Buckmoth fitness is needed, as well as determining percent cover of the host plant needed at sites for sustaining populations. The impact of the egg parasitoid Anastatus furnissi on Bog Buckmoth populations is in need of study, as well as parasitoid behavior and ecology (Bonanno and White 2011). The possibility of larval parasitoids affecting NY populations should be investigated (Bonanno pers. comm). Vegetation surveys to evaluate invasions of cattail and invasive plants and development of methods for restoring Bog Buckbean abundance would benefit future habitat restoration attempts.Taxonomic status studies to compare genetics of the NY, Wisconsin and Ontario populations with other members of the Hemileuca maia maia complex is also needed (Bonanno and White 2011). While very similar in morphology to other species in the Hemileuca maia complex, Hemileuca sp. 1 is not recognized as a distinct species and taxonomic classification remains unresolved (Legge et al. 1996, Rubinoff and Sperling 2004, Gradish and Tonge 2011). Ecological differences between Bog Buckmoth and other Hemileuca are significant and has been the basis for their recognition and protection as a species or evolutionary significant unit (Rubinoff & Sperling 2004). Rubinoff et al. (2017) found that the phenomenon of little genetic differences is widespread and common for members of the Hemileuca maia complex throughout its range, even with divergence in habitat, isolation of populations, differences in host-plant use, and variation in flight season. Earlier studies found a lack of genetic difference of Bog Buckmoth with other Hemileuca (Legge et al. 1996, Rubinoff & Sperling 2004), but Dupuis et al. (2018) found the NY population of Bog Buckmoth exhibits high relative genetic divergence compared to other ecologically divergent populations within the H. maia complex.

Bog Buckmoths inhabit minerotrophic fens with variable dominance of “…sedge-dominated floating peat mats on lake edges to low shrub-dominated backwater peat mats behind barrier dunes in the Lake Ontario basin“ with a ground layer of Sphagnum moss (Stanton 2004). The larval food plant, Bog Buckbean (Menyanthes trifoliata) also needs to be present and abundant (Legge et al. 1996). There are many fens in NY that appear to be appropriate for the species given these criteria, but where the species is not present (Bonanno pers. comm). Additional research is needed on the percent cover of the host plant needed at sites for sustaining populations, but also other microhabitat criteria the species prefers.

All six known locations in New York are in Oswego County. Five of the wetlands are near the Lake Ontario coast and one wetland is farther inland (New York Natural Heritage Program 2019).

Adult Bog Buckmoths are large, black moths with translucent wings containing white bands and eyespots (NatureServe 2019). Males have red tufts on the apical segments of the abdomen and bipectinate antennae, while females have simple antennae and lack the red tuft (Stanton 1998). Wingspan has been reported to be 6.5 cm and males have forewings of 26-32 mm in length, while females have 32-36 mm-long forewings (Stanton 1998, COSEWIC 2009). Larvae are dark, with rusty-orange, branched spines dorsally, and a reddish-brown head capsule and prolegs (COSEWIC 2009). The spines are urticating and can cause a welt if handled (Tuskes et al. 1996). This description is similar to other Hemileuca species, but Bog Buckmoth larvae have reduced yellow markings on the body compared to other species, and lack a yellow spiracular stripe ascribed to others in the H. maia complex (COSEWIC 2009, NatureServe 2019).

Larvae possess stinging spines and in early instars are gregarious, which are thought to be defense mechanisms, while by the 5th instar, larvae become more solitary feeders (Tuskes et al. 1996, Stanton 2004).

Bog Buckmoths are the only Hemileuca species in which the larvae can develop solely on Bog Buckbean (Menyanthes trifoliata). This plant has been known to emerge from April 15 through June 15 (Serra 2003) and early instars of larvae feed mainly on this host plant (Legge et al. 1996), locating it by wandering (Stanton 1998). When larvae first emerge, they have been observed to feed on the foliage of any plant closest to them until availability of Bog Buckbean.

Female Bog Buckmoths lay their eggs after mating in the fall, and the eggs overwinter. The young hatch from April through early June, develop as larvae from May through mid-July, pupate in the peat, and emerge as adults in mid-September. Adults are diurnal, and fly through mid-October, with peak flight around Sept. 26-28 (Tuskes et al. 1996, Stanton 1998). There is no parental care of the eggs and young, as adults die off in the fall (Tuskes et al. 1996).

The time of year you would expect to find Bogbean Buckmoth reproducing, larvae present and active, eggs present outside adult, and pupae or prepupae present in New York. 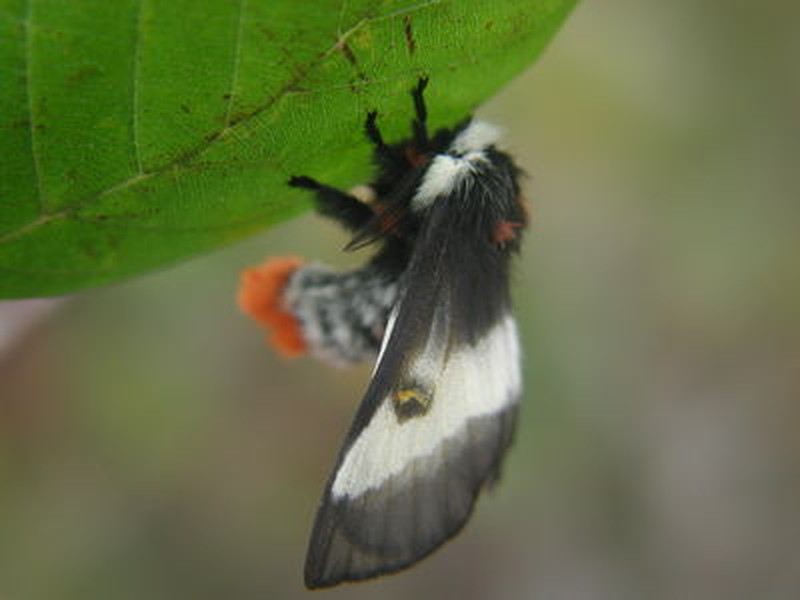 COSEWIC. 2009. COSEWIC assessment and status report on the Bogbean Buckmoth Hemileuca sp. in Canada. Committee on the Status of Endangered Wildlife in Canada. Ottawa. www.sararegistry.gc.ca/species/speciesDetails_e.cfm?sid=1058.

Steele, T.J. and R.S. Peigler. 2015. Biology of four species of Hemileuca (Saturniidae) in Texas with special reference to their parasitoids. Lepidoptera Science 66 (1): 1-7.