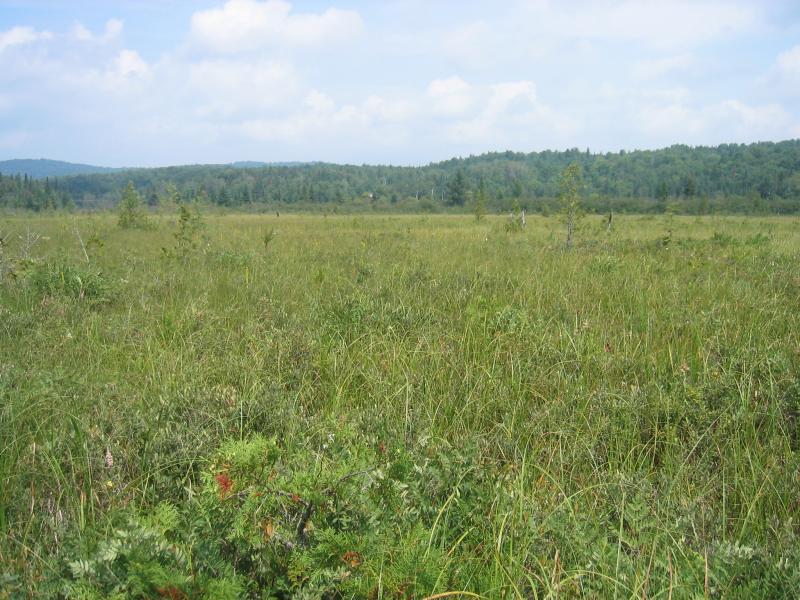 One of the dominate plants in medium fens is sweet-gale. Historically, gale was used to flavor beer. Today, most brewers use hop. However, in the middle ages, gale was the most efficient and cheap flavoring. Beer was also flavored with fennel, mint, juniper, and rosemary, as well as gale, to improve the durability as well as the taste. Gale is also used as a spice in soups and stews, like bay leaves. Their catkins, or cones, produce a wax when boiled in water that can be used to make candles.

There are several hundred occurrences statewide. Some documented occurrences have good viability and many are protected on public land or private conservation land. This community is limited to the calcareous areas of the state, and includes several large, high quality examples. The current trend of this community is probably stable for occurrences on public land, or declining slightly elsewhere due to moderate threats related to development pressure or alteration to the natural hydrology.

The number and acreage of medium fens in New York have probably remained stable in recent decades as a result of wetland protection regulations. There may be a few slight losses due to alteration of hydrology by impoundments (converting to sedge meadow or another palustrine type).

The number and acreage of medium fens in New York have probably declined moderately from historical numbers likely correlated with the onset of agricultural and residential development.

Consider how water flows around and into this wetland. As most of the water inputs are from underground, management for the prevention of altered water quality and quantity is particularly difficult for this natural community, but also of utmost priority. Projects that occur near this community must consider the proximity of the development to this wetland and the potential for changing how water flows, both aboveground and belowground, into this wetland. Concerning the proximity to the wetland, terrestrial buffers provide nesting habitat for resident salamanders, frogs, and turtles, and additional food sources for locally nesting birds. Consultation with a hydrologist is important to determine patterns of run-off and underground water sources for the wetland; in addition, impervious surfaces that rapidly divert water to the wetland should be avoided. Rapid influxes of surface water dilute the limey, mineral rich waters, decrease the robustness of the native fen species, and increase the likelihood of invasion by non-native species.

Additional inventory efforts in regions with calcareous bedrock and promising wetlands will likely turn up a few additional sites. Re-inventories of known sites will provide important information to help assess short and long-term changes. Survey fens that provide habitat for rare species. For example, extant bog turtle sites should be surveyed to determine the type and quality of natural community if unknown.

This community is currently known from the Eastern Ontario Lake Plain, the Tug Hill Plateau, the St. Lawrence Valley, Lake Champlain Valley, the Central Adirondacks, and the southern end of Lake George. Single examples are known from the Mohawk Valley and the Hudson Valley. Additional occurrences may be located elsewhere in the state where similar environmental conditions are possible.

The range of the physically broadly-defined community may be worldwide. Examples with the greatest biotic affinities to New York occurrences are suspected to span north to southern Canada, west to Minnesota and Illinois, south probably at least to Virginia, and northeast to Maine.

A moderately minerotrophic peatland (intermediate between rich fens and poor fens) in which the substrate is a mixed peat composed of graminoids, mosses, and woody species. Medium fens are fed by waters that are moderately mineralized, with pH values generally ranging from 4.5 to 6.5. Medium fens often occur as a narrow transition zone between an aquatic community and either a swamp or an upland community along the edges of streams and lakes. In medium fens, the herbaceous layer, dominated by the sedge Carex lasiocarpa, typically forms a canopy that overtops the low shrub layer. The physiognomy of medium fens may range from a dwarf shrubland to a perennial grassland, and be either shrub-dominated, herb dominated or have roughly equal amounts of shrubs and herbs.

Known examples of this community have been found at elevations between 95 feet and 2,001 feet.

Many of the characteristic species flower in June and July, making these months good times to visit this community. 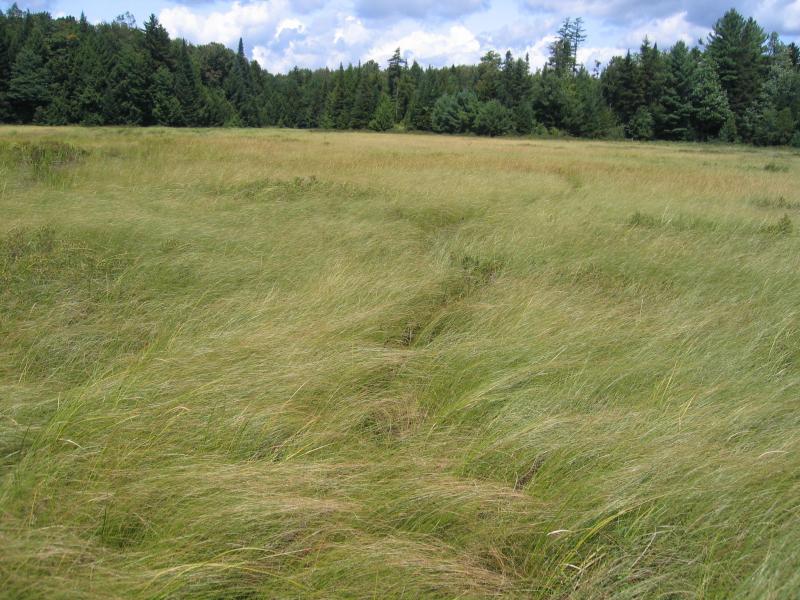 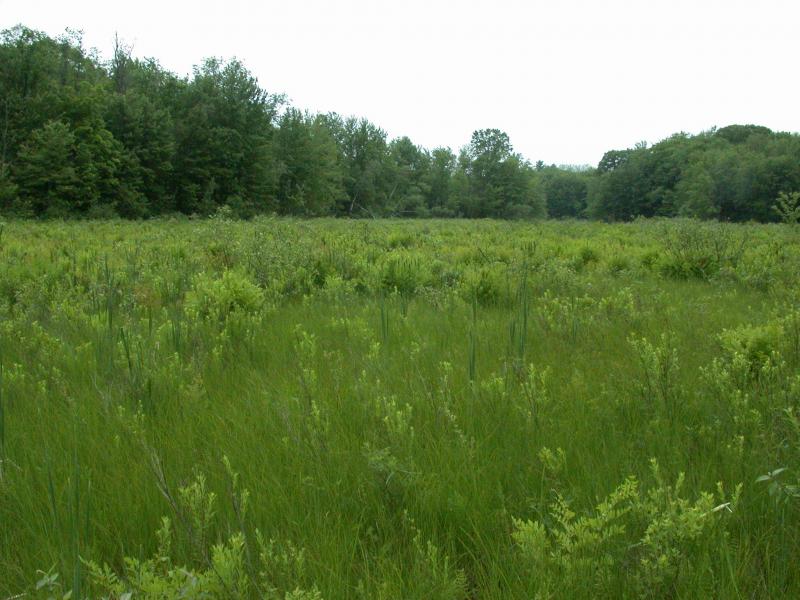 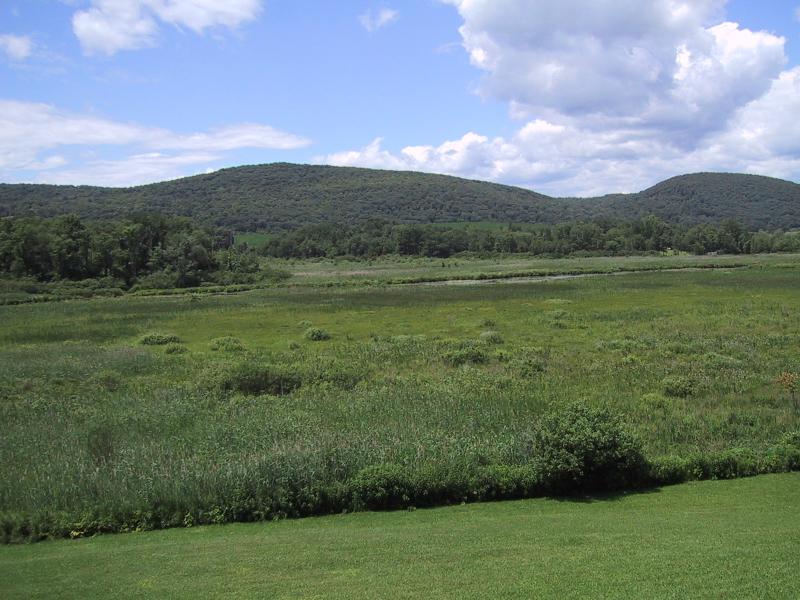 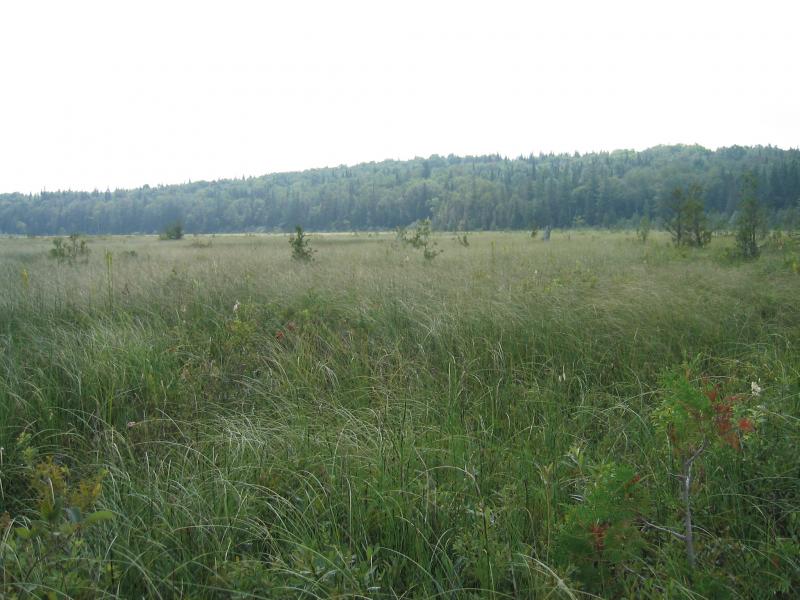 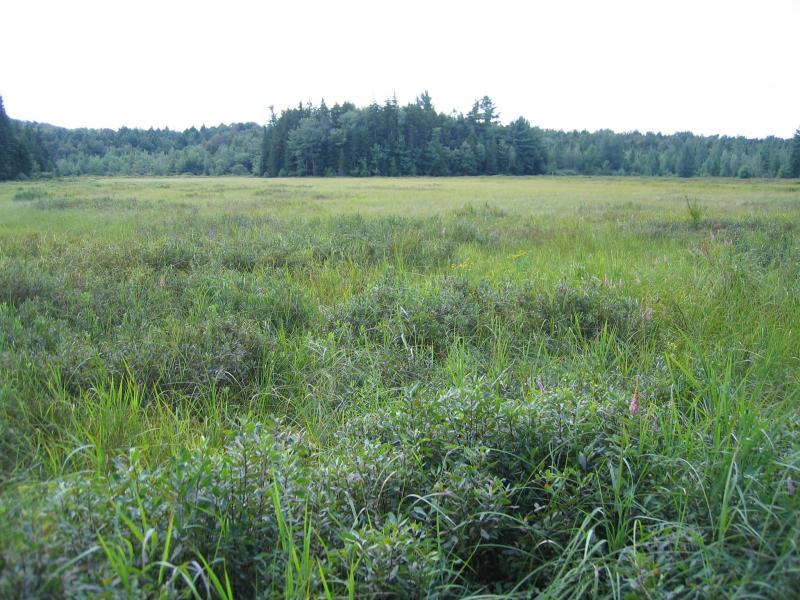 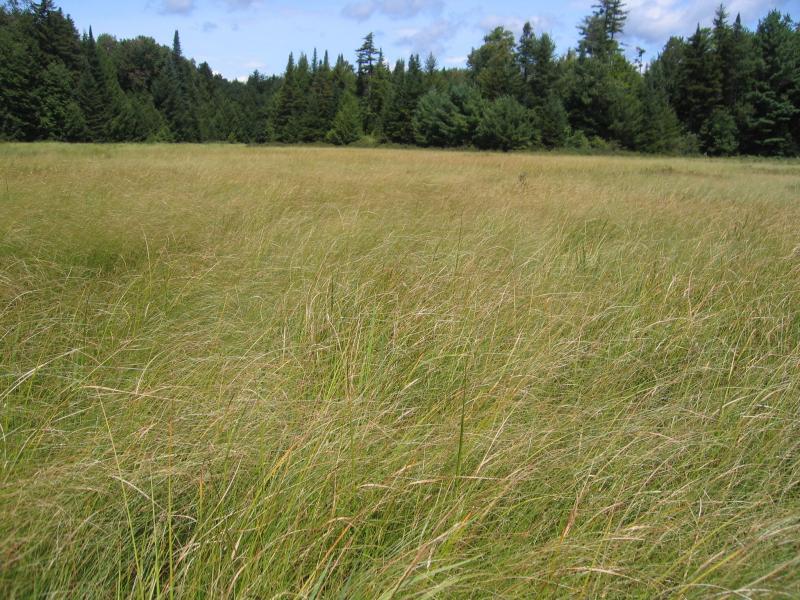 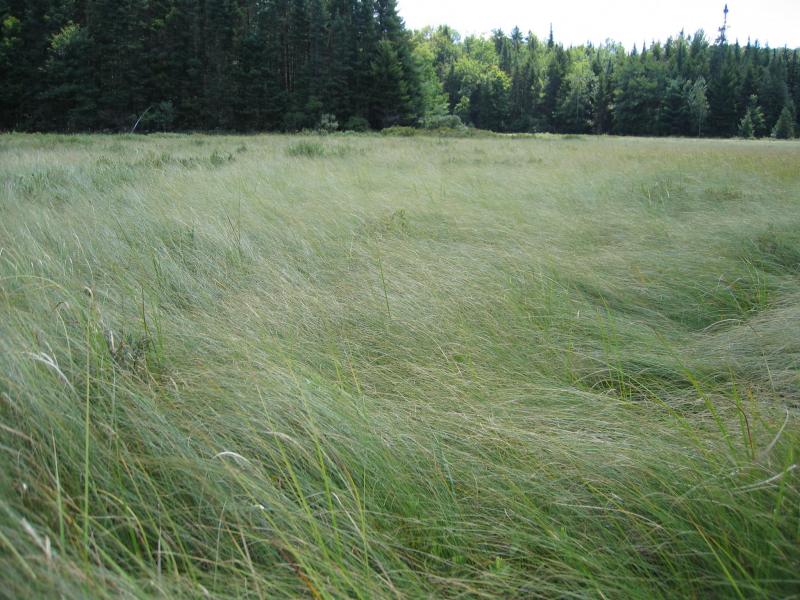 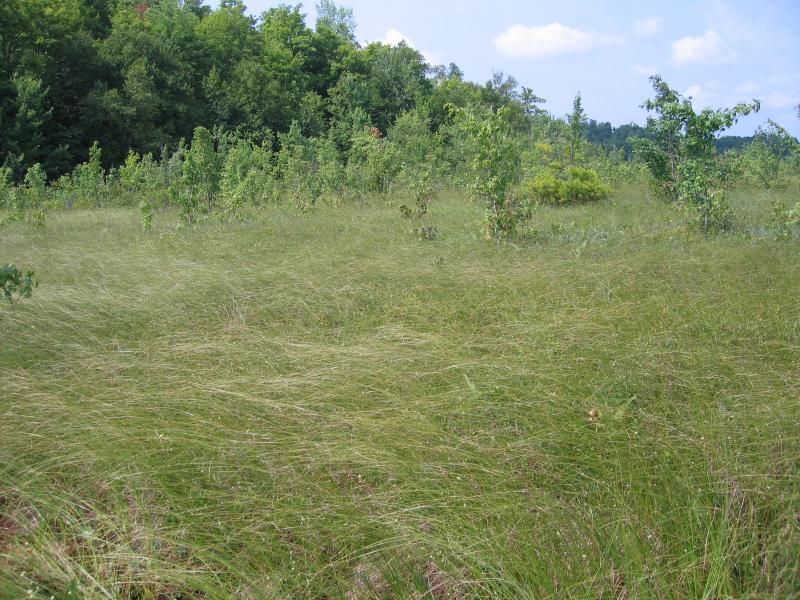 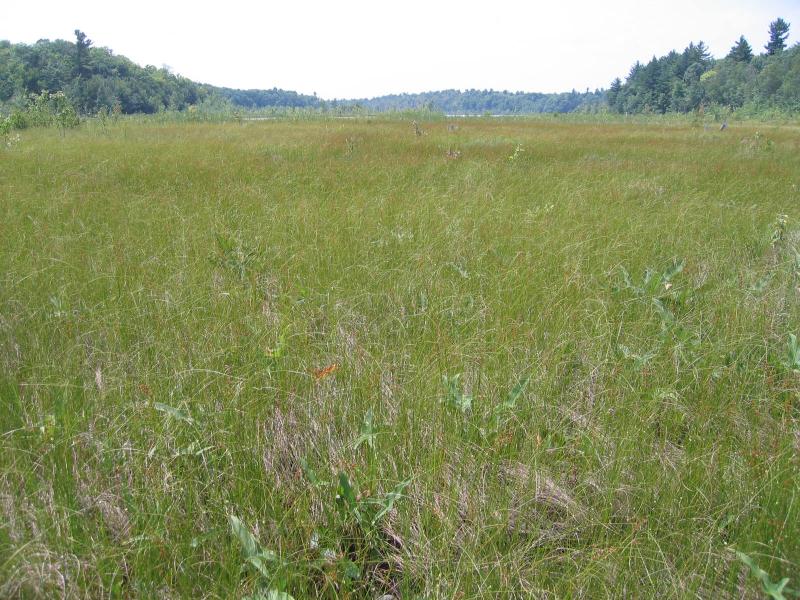 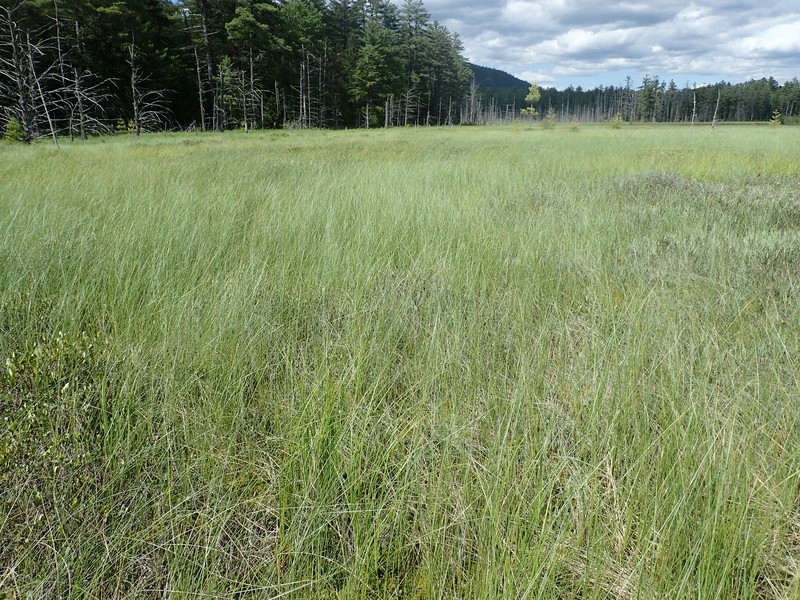 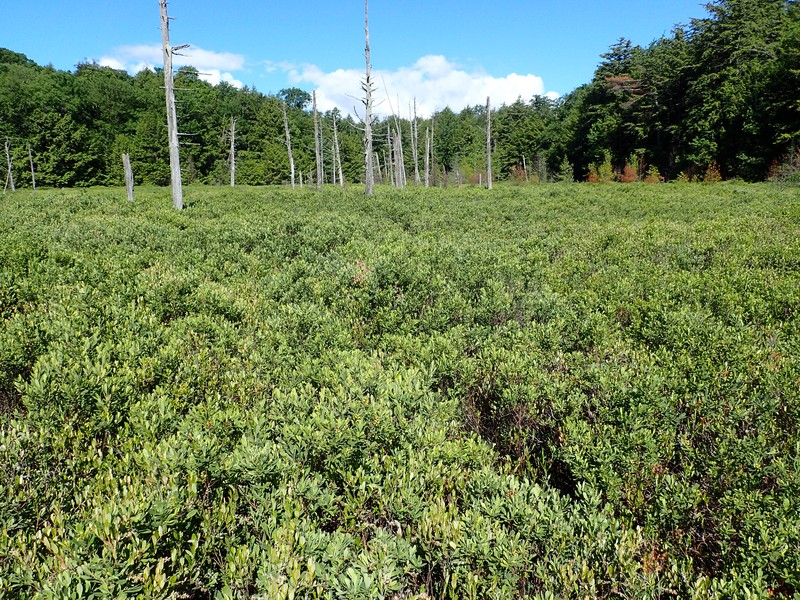 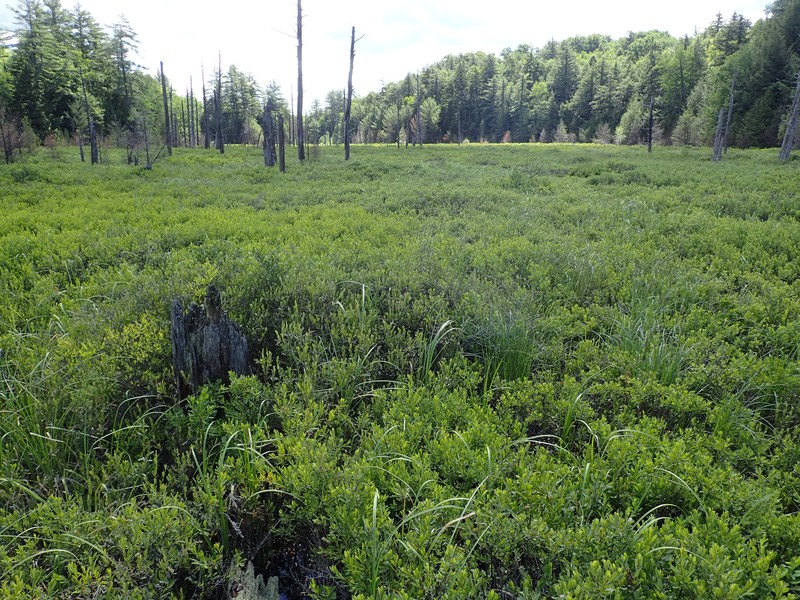 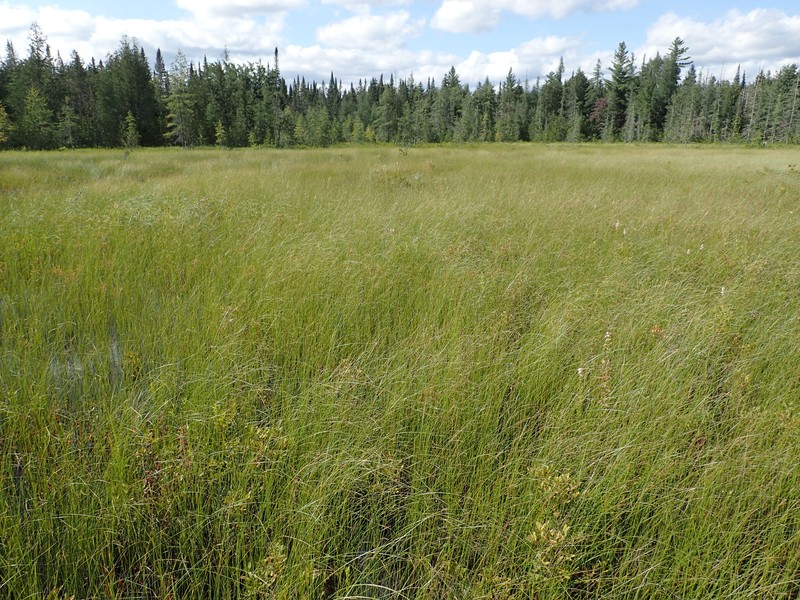 This figure helps visualize the structure and "look" or "feel" of a typical Medium Fen. Each bar represents the amount of "coverage" for all the species growing at that height. Because layers overlap (shrubs may grow under trees, for example), the shaded regions can add up to more than 100%.