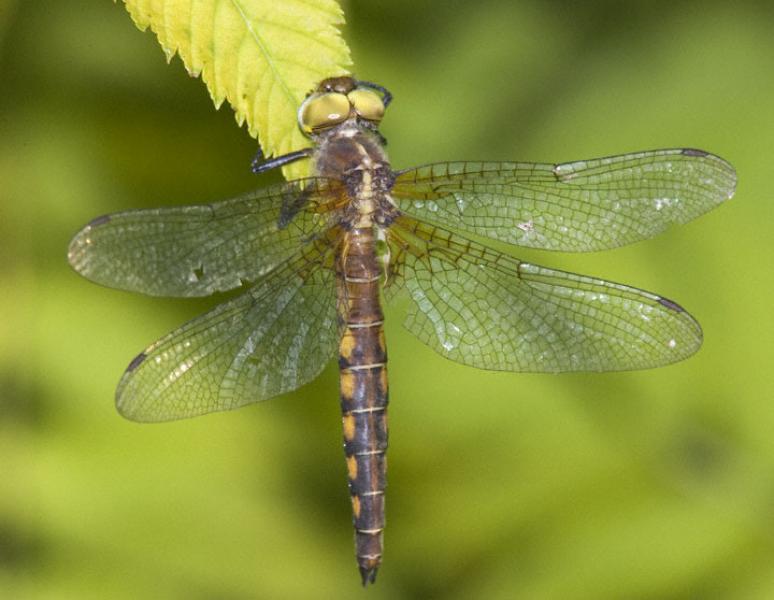 Even though this dragonfly is almost never seen in broad daylight, sometimes a mass emergence occurs in late May or early June, when hundreds of these otherwise cryptic river denizens float on the breeze above the river.

This newly described species (Brunelle 2000) was discovered as a new member of the New York odonate fauna in 2008 during the New York Dragonfly and Damselfly Survey (White et al. 2010). It is only known from a short (~ 20 Km) stretch on the upper Delaware River and this population is disjunct from the main range forming a small outlier on the extreme southern range boundary of this northerly species. No new locales have been documented since 2009 and this cryptic, crepuscular species will always likely suffer from a lack of complete knowledge.

Recent surveys have expanded the known range of this species in neighboring Quebec (Charest and Savard 2014) and Ontario (Catling et al. 2004). However this is a newly described, cryptic, crepuscular species, so this probably does not indicate a recent range expansion, but simply increased attention by odonatologists.

This is a newly documented species in New York.

Because the entire New York population occurs on only a short segment of the upper Delaware River, any activities which degrade these sensitive habitats might threaten this species. The most important likely negative impacts would come from changes in water temperature or the natural hydrology such as water removals, the operations of upstream dams (Donnelly 1993), increases in the sediment load or associated stream changes in dissolved oxygen content, direct effects of pesticides, and chemical contamination by runoff of agricultural or other discharge.

The effects on this species of managing the upper Delaware River as a coldwater trout sport fishery (via hypolimnial water releases from the NYC water supply dams) should be investigated. In addition, dense stands of invasive Japanese Knotweed (Fallopia japonica) along the riverbanks may alter ecological proccesses along this reach of the river.

This species was first documented in New York on the upper Delaware River in 2008, 2009 during the NYDDS. It may be more common and widespread than current records indicate, but owing to its cryptic, crepuscular behavior as well as its larval similarity to Neurocordulia yamaskanensis, it may be under-reported. The status of the regional range disjunction is not known, but the species was not found during a newly completed multi-year odonate Atlas in New Hampshire.

This dragonfly is found only in clear, clean medium to large rivers with a strong current over coarse cobbles and periodic rapids sections; it is not found in tumultuous mountain streams. Larvae have been collected from beneath stones under boulders in water one-half to 1 meter deep in riffles at the head of spring-fed pools. The exuviae (shed skins) can sometimes be found on bridge abutments. Adults presumably live in riparian forests.

This dragonfly is only known from the vicinity of Long Eddy to Cohecton on the upper Delaware River, a stretch of just ~20 Kms.

This species ranges from central Nova Scotia (Klymko and Robinson 2013) and northern New Brunswick to southwestern Maine, west through Quebec (newly discovered) to southern Ontario; a southern disjunct occurs on the New York/Pennsylvania border on the upper Delaware River.

The thorax is brown, the abdomen is blackish with bold yellow rectangles on the sides. The wings are suffused with an orangish tinge at the base, and the eyes are dull greenish to yellowish.

Larvae and exuviae are very similar to the Stygian Shadowdragon and capture of adults is necessary to document new sites.

The body and wing coloration is very reminiscent of a Baskettail (Paulson, 2011), but the lotic (flowing water) habitat and crepuscular activity period should serve to distinguish a Shadowdragon from the more ubiquitous, usually lentic (stagnant water) Baskettails.

Adults are very elusive and crepuscular, but offer definitive identification of this species.

As with all Neurocordulia, this is a crepuscular (twilight) species that flies for about 45 minutes after sundown in late May to early June in New York. Daylight hours are probably spent at rest in the understory of surrounding forests (Catling et al., 2004). Eggs are laid in rapids and the downstream ends of pools, and development of larvae occurs in the interstices of the benthic cobbles.

The larvae are generalist predators, while the adults feed on emerging mayflies.

In New York, this species has only been detected during the last few days in May and first couple days of June. In Ontario and Maine, the flight season encompasses June, July.

The time of year you would expect to find Broad-tailed Shadowdragon reproducing and larvae present and active in New York.

Information for this guide was last updated on: March 30, 2015