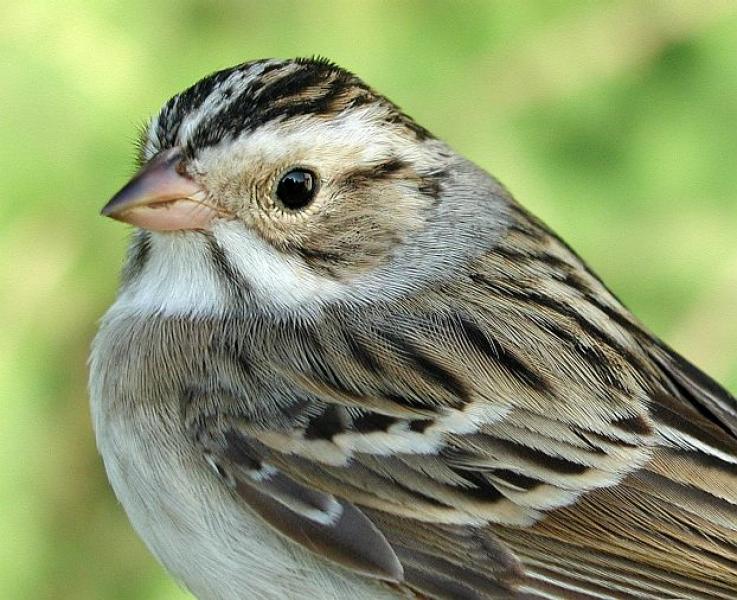 State Conservation Status Rank
S3S4B
Vulnerable in New York, or Apparently Secure – Vulnerable to disappearing from New York (but not currently imperiled), with relatively few populations or locations, few individuals, and/or restricted range; or uncommon but not rare in New York; may be rare in some parts of the state; possibly some cause for long-term concern due to declines or other factors. More information is needed to assign either S3 or S4. (A migratory animal which occurs in New York only during the breeding season.)
Global Conservation Status Rank
G5
Secure globally - Common in the world; widespread and abundant (but may be rare in some parts of its range).

Clay-colored Sparrows have been known to breed with Chipping Sparrows.

Clay-colored Sparrows have been expanding their range from eastern Canadian provinces into New York State. Breeding Bird Atlas data reports that the number of probable and confirmed blocks has increased from 23 in the mid-1980s to 49 from 2000 to 2005 (Andrle and Carroll 1988, McGowan and Corwin 2008). While the Clay-colored Sparrow population in New York appears to be increasing, breeding is rarely established at one location and populations may not be stable as suitable habitat converts to woodlands.

During the first Breeding Bird Atlas, Clay-colored Sparrows were reported in 23 blocks from 1980 to 1985 with 12 blocks recorded as probable or confirmed breeding (Andrle and Carroll 1988). This species was reported in 67 blocks during the second Breeding Bird Atlas (2000-2005) with 49 blocks reported as probable or confirmed breeding (McGowan and Corwin 2008). When comparing probable and confirmed breeding blocks from both atlases, it appears that the breeding population may have quadrupled. In addition, the range has expanded from 14 counties to 30 counties in New York between the two atlases. The increase is most likely due to the increasing conversion of cropland to shrubland in the state. Breeding Bird Survey data are too sparse in New York to determine trends (Sauer et al. 2007).

The first breeding record for Clay-colored Sparrow is from 1970 at Ithaca in Tompkins County. Since then, the population has been increasing in New York. While breeding rarely occurs at the same location on a regular basis, they are likely established breeders in many counties. Breeding Bird Survey Data was not abundant enough to determine trends (Sauer et al. 2007).

The main threat to Clay-colored Sparrows in New York is loss of suitable habitat through succession. There are many areas in the state where farming has declined allowing for old farm fields to succeed to a shrub habitat. This has resulted in what is likely a temporary increase in suitable breeding habitat. However, without management, succession will continue and suitable shrubby areas will eventually decline. Brood parasitism by Brown-headed Cowbirds is another potential threat.

Efforts should be made to maintain habitat so that shrubs persist in areas where Clay-colored Sparrows breed. Management may include mowing or burning in patches or light grazing. Allow grasslands to remain idle to promote shrubby vegetation growth. While Clay-colored Sparrows readily use cropland to forage, they do not for nesting. It is important to retain or promote brushy edges along cropland edges for nesting (NatureServe 2007).

Additional research is needed to determine the percentage of time Clay-colored Sparrows are breeding with Chipping Sparrows.

In New York, breeding Clay-colored Sparrows are typically found in abandoned agricultural land that has been invaded by shrubs and saplings, young conifer plantations, and regenerating clear-cuts (Carroll and Andrle 1988, McGowan and Corwin 2008). Areas with scattered shrubs or small trees interspersed with grassy or weedy openings seem to be preferred. In western parts of the state, young conifer tree plantations are used more often. To the north, sandy pine barrens habitat is more likely to be occupied by breeding birds. Idle or lightly grazed grasslands with low shrubs are used in other parts of the state.

Breeding Clay-colored Sparrows are found in patchy locations throughout New York State excluding Long Island and high elevations of the Catskills and Adirondacks. Migrants have been reported on Long Island in addition to breeding locations.

The Clay-colored Sparrow is a small sparrow with a notched tail. Underparts are buff to gray with a brown rump. Wings are streaked with 2 white wing bars. There is a gray band across the nape of the neck splitting the streaked head and neck. Sexes are similar. During the breeding season, plumage differs in that there is a white eye stripe, a dark cheek line that includes a distinctive moustache, and a white throat patch with dark bars dividing the patch into three segments in males. Nests are fairly compact and cup-shaped. Typically, nests are woven grasses that are lined with finer grasses, rootlets, and animal hair that are usually in a low shrub or tree. Vocalizations are a series of two to eight low, flat buzzes that can be easily mistaken for an insect.

The best time to observe Clay-colored Sparrows is during the breeding season when the males are maintaining territories from late May to early July. They may be observed migrating until the end of November.

The time of year you would expect to find Clay-colored Sparrow active and reproducing in New York. 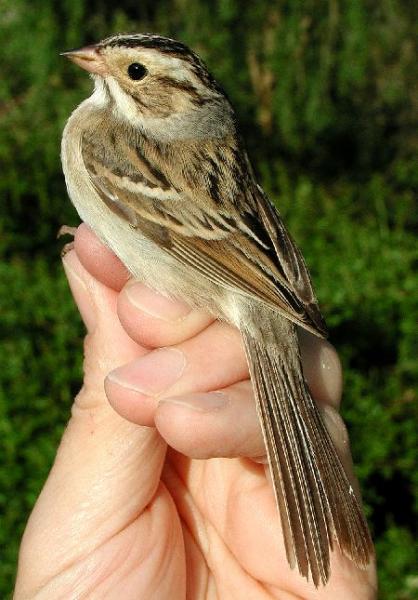 Information for this guide was last updated on: December 31, 2007