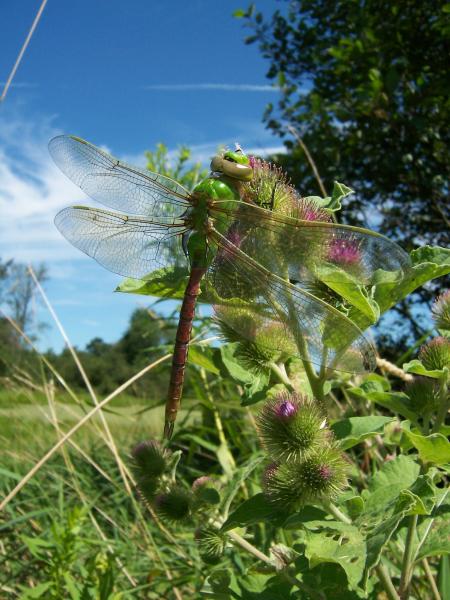 Although not breeding in every year, a population of Comet Darners has persisted at a pond in central Pennsylvania for over five decades (Shiffer and White 1995).

This species is confined to the southern half of the state and most of the known occurrences are at imperiled (S2) Coastal Plain Ponds on Long Island. Further upstate, it has been found breeding at a few widely scattered locations in many different types of pond habitats.

Although discovered in fewer counties during the NYDDS, the range in New York seems to have expanded somewhat since pre-2000 (White et. al. 2010). The first known population in western New York was discovered in 2006 near Jamestown, and newly- discovered populations in the Finger Lakes region are reported to be quite abundant (Gregoire and Gregoire 2007). Comet Darners have also been observed further north in the Hudson Valley (Rensselaer, Saratoga Counties), but it is unclear whether these represent established breeding popualtions or wandering individuals.

The Comet Darner has been known from the New York City area since the late 1800s, and it's general range in the state seems to be relatively stable (White et al., 2010).

This species' Coastal Plain Pond habitat on Long Island is threatened by the introduction of grass carp, alterations to hydrology and water quality, as well as herbicides used to clear aquatic weeds from ponds. The most significant threat to their hydrology comes from commercial and residential development causing increases in the demand for fresh water. This causes drawdowns of the water table, altering the hydroperiod and generally diminishing the pond extent (NYNHP 2011). Upstate, the threats to this species' eutrophic pond habitat appear to be slight, especially because it seems to occupy a variety of different types of ponds.

The most important management concern for Coastal Plain Pond habitats is the maintenance of a natural hydrologic regime and good water quality. Water supplies for new development and ditching, draining or impoundment activities should be weighed carefully. Storm water run-off, herbicide and pesticide use should also be minimized or eliminated in the vicinity of ponds. Where practical, wide (> 100') vegetated buffers should be managed to reduce storm-water, pollution, sediment and nutrient run-off and provide shading and roosting sites. Habitat alteration within the wetland and surrounding landscape should be minimized (NYNHP 2011). In upstate New York, this species has colonized new farm ponds about five years post-construction. The ponds were about 15-18 feet deep, fringed by sedges and cattails, of neutral pH, and containing abundant submerged aquatic vegetation including Chara and Potamogeton spp. (Gregoire and Gregoire 2006). Some of the ponds had small fish, while others were fishless. It is unclear what characteristics make certain farm ponds suitable, while the vast majority aren't occupied.

A clearer understanding of habitat requirements is desirable, especially the degree to which larvae can co-exist with predatory fish populations. The collection of exuviae (shed skins) from shoreline vegetation surrounding breeding ponds suggests that this species is much more abundant in localized areas than is indicated by the observation of adults only (Gregoire and Gregoire 2007). Thus, further research is needed to determine if significant numbers of adults disperse from their natal sites, possibly establishing new breeding populations.

This species inhabits a wide variety of (semi)permanent small lakes, coastal plain ponds, abandoned shallow quarry ponds, natural rocky ponds, and sometimes constructed farm ponds. The habitat feature in common seems to be an abundance of floating and submerged vegetation (especially Chara spp.) in eutrophic conditions. It frequents Coastal Plain Ponds with ample shoreline vegetation including Pickerelweed (Pontederia cordata), rushes (Juncus spp.) and Plymouth Gentian (Sabatia kennedyana) (Carpenter 1991). Whether larvae of this species can co-occur with fish is unclear, but the adults are often the dominant species among many other common pond odonates.

The current stronghold is on Long Island where there are numerous occupied Coastal Plain Ponds. It ranges northward up the Hudson Valley to Albany County. Further inland, it has been reported from the Susquehanna watershed in Schuyler and Chenango Counties. A recent range extension was documented in far southwestern New York (White et al., 2010).

The Comet Darner is considered a tropical species (Hine 1913) and the center of its North American distribution lies in southern Kentucky. It ranges north to New Brunswick, south to Cuba and west to Texas and Wisconsin.

This is a large (3") powerful, fast-flying dragonfly. The males have a bright green unmarked thorax, a bright red abdomen and dark greenish eyes. The female thorax is entirely green, with a dull rusty abdomen and pale dorsolateral markings.

The bright red abdomen of the male is diagnostic. The legs of both sexes are also reddish.

These large, fleet dragonflies are usually observed flying rapidly over open water up to eight feet high, where they are very difficult to catch with an insect net especially because they seldom alight. They can often be observed at waterbodies far from breeding sites. Females oviposit in the stems of water lilies or other emergent vegetation (Carpenter 1991). Activity seems to be more prevalent during early morning and late afternoon hours (Gregoire and Gregoire 2006).

Adults are aerial generalist insect predators and are the dominant dragonfly where they occur (Carpenter 1991); larvae are also highly predatory and can even take small vertebrates such a minnows and amphibian tadpoles.

This species has an extended flight season in New York from early June to mid September, with the majority of site records coming during July (White et al. 2010). A well-studied pond in central New York had emergence dates of June 16 to August 26, with a peak in late June (Gregoire and Gregoire 2007).

The time of year you would expect to find Comet Darner reproducing and larvae present and active in New York.

Shiffer, C.N, and H.B. White. 1995. Four decades of stability and change in the odonate populations at ten acre pond in central Pennsylvania. Bulletin of American Odonatology 3:31-40.

Information for this guide was last updated on: May 16, 2011