Botrychium neolunaria was named by Carl Linneaus for the pinnae which have a crescent moon shape. The common name, moonwort, comes from this species but not all moonwoorts have crescent-shaped pinnae. In the past it was thought that these ferns could raise the dead, open locks, or remove the shoes of horses that tread upon them.

The only existing population has seen a reduction in numbers but the severity is complicated by the difficulty in counting individuals without harming them and the added difficulty of distinguishing them from the closely related Botrychium minganense. All the plants may not appear each year so long-term counts must be done to verify trends.

Only four locations were ever known for this fern. Plants still exist at one locality and habitat exists at another. The population along a road in Jamesville has not been seen since the 1870s and is probably gone.

The primary threat to Botrychium neolunaria is the loss of its open habitats to successional overgrowth and development. Trampling by visitors to the only known site is also a threat since the plants are small and easily overlooked.

An evaluation of the management needs of the existing population should be undertaken.

A long-term demographic study should be undertaken to understand the biology and trends of this plant in New York.

This is a fern of northern white cedar forests and open pastures that are casually grazed where the underlying bedrock is calcareous. Often found with other moonworts (New York Natural Heritage Program 2005). Open fields, occasionally forests in southern occurrences (Flora of North America 1993). Open fields and meadows, or sandy or gravelly streambanks (Gleason and Cronquist 1991). In dry pastures, meadows, and on hillsides and rocky ledges (Cobb 1984). Open turfy, gravelly or ledgy slopes, shores and meadows, chiefly calcareous (Fernald 1970).

This plant is only known from one location in Onondaga County. There are 2 historical locations within Onondaga County, but only one known site. There is also an 1895 report (Prescott 1895) from northern Oneida County that includes a picture and seems very reliable.

Moonwort is a very small, perennial fern with a single aboveground frond. The dark-green frond is usually about 4 inches long and can be seen through mid-summer. It is divided into two leaves above a common stalk. The sterile leaf is usually dark green, thick, and fleshy. It has up to nine usually overlapping pairs of broadly fan-shaped leaflets (pinnae). The top edges are rounded and smooth or wavy or rarely have teeth. The fertile leaf is longer than the sterile leaf with branches that bear grape-like sporangia. Spores germinate underground and develop into tiny, non-photosynthetic gametophytes which depend on a fungus for nourishment.

This fern is best identified when the leaves are fully formed.

Botrychium neolunaria is most easily confused with Botrychium minganense, Botrychium campestre, and Botrychium simplex. The pinnae of Botrychium minganense and Botrychium campestre are narrower, wedge shaped and do not overlap. Botrychium campestre has a shorter and more branched fertile leaf and the pinnae of the sterile leaf are often deeply divided at the top. It's leaves can only be seen in the spring. In Botrychium simplex the upper pinnules are somewhat fused together and not separate. The fertile leaf often arises from near the ground level. Botrychium matricariifolium pinnules are long and narrow with a central midrib and secondary segments. Reliable field determination of moonworts depends on the careful use of technical keys and comparison with silhouette outlines of verified specimens. Identification can be complicated because there is often a high degree of morphological variability between individuals in a population and between populations of the same species. Several species may grow together at the same site, and the few diagnostic characters may not be apparent in small plants.

Mature fronds of this plant are visible from June to August. This should be the time of year when surveys for this species are conducted.

The time of year you would expect to find Common Moonwort vegetative and fruiting in New York. 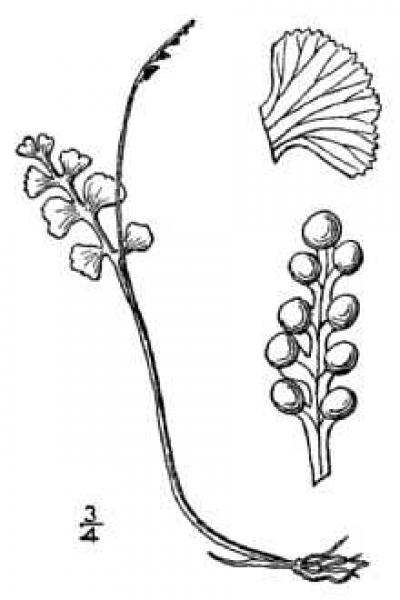 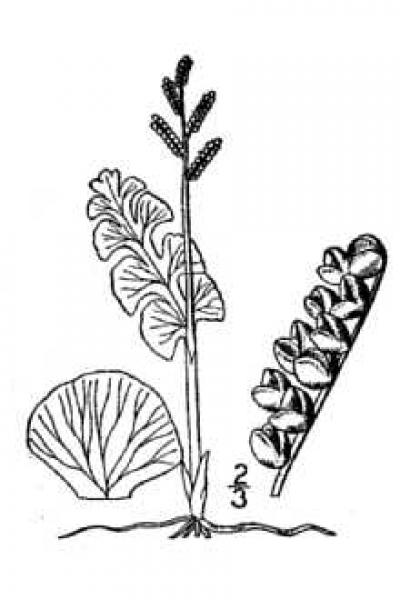 Cobb, Boughton. 1984. A field guides to ferns and their related familes, Northeastern and Central North America with a section on species also found in the British Isles and western Europe. The Peterson Field Guide Series. Boston, New York.

Information for this guide was last updated on: December 3, 2019