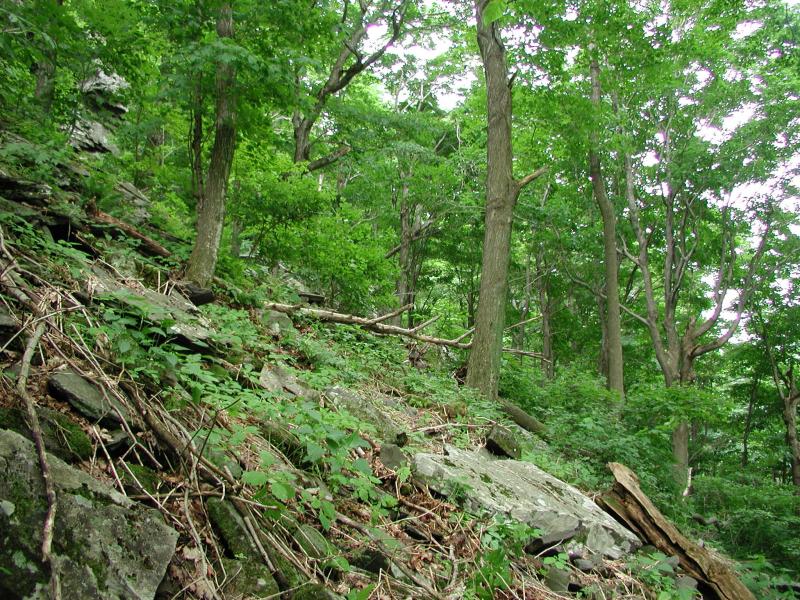 What is talus? Talus, or scree, is a steep slope usually found at the base of a mountain. The block size of the talus is strongly influenced by the type of rock forming the cliff face and rate of erosion. Shale talus or rapidly eroding sandstone forms unstable, small, loose talus, eroded from the mountain's face. The unstable nature of shale results in uneven slopes and many rock crevices. Other talus, such as hard dolostone caprock, produces stable, very large talus that provides habitat for much larger organisms.

There are several hundred occurrences statewide. Some documented occurrences have good viability and many are protected on public land or private conservation land. This community is limited to areas with calcareous talus across the state, and includes several high quality examples. The current trend of this community is probably stable for occurrences on public land, or declining slightly elsewhere due to moderate threats related to development pressure.

The number and acreage of calcareous talus slope woodlands in New York have probably declined slightly in recent decades as a result of logging, conversion to agriculture, and other development.

The number and acreage of calcareous talus slope woodlands in New York have probably declined substantially from historical numbers as a result of logging, conversion to agriculture, and other development.

Minimize or avoid habitat alteration within the woodland and surrounding landscape. Prevent recreational overuse. Remove/prevent the spread of invasive exotic species into the woodland through appropriate direct management, and by minimizing potential dispersal corridors, such as trails and roads.

A natural (usually forested) buffer around the edges of this community will help it maintain the microclimatic characteristics that help make this community unique.

This community is currently known from Western New York within the Niagara Region, in central New York north of the Finger Lakes, and at scattered locations in the Hudson Valley. Calcareous talus slope woodlands are also known from the Adirondack Mountains within the Eastern Adirondack Low Mountains (Lake George Valley) and in the limestone region of Lewis County. Additional occurrences may be located elsewhere in the state where the bedrock is calcareous.

The range of this physically broadly-defined community is probably global, but limited to mountainous areas with calcareous bedrock. Examples with the greatest biotic affinities to New York occurrences are suspected to span north to southern Canada, west to Ohio and Kentucky, southwest to Tennessee, and east to western New England.

An open or closed canopy community that occurs on talus slopes composed of calcareous bedrock such as limestone or dolomite. The soils are usually moist and loamy; there may be numerous rock outcrops.

The combination of rich vegetation indicating calcium enriched bedrock and steep rocky slopes (talus) identify this community. Talus should make up at least 50% of the substrate and is typically at least partially moss-covered. Talus should be derived from cliff rockfall or from landslides and slopes that average about 20 degrees, but can be as steep as 45 degrees. Plant communities of a calcareous talus slope woodland can range from closed canopy forests to a sparse canopy woodlands to steep, open slopes of non-vegetated bare rock. Plants that can be found on calcareous substrates include sugar maple, white ash, eastern hop hornbeam, basswood, northern white cedar, butternut, bladdernut, alternate-leaf dogwood, and mountain maple. Ferns that grow on the rocks often include bulbet fern, maidenhair spleenwort, fragile fern, and walking fern. Other characteristic plants that might grow on the rocks and calcium rich soil include herb robert, Solomon's seal, wild ginger, white baneberry, early meadow rue , blue cohosh, and blue-stem goldenrod.

Known examples of this community have been found at elevations between 50 feet and 1,969 feet. 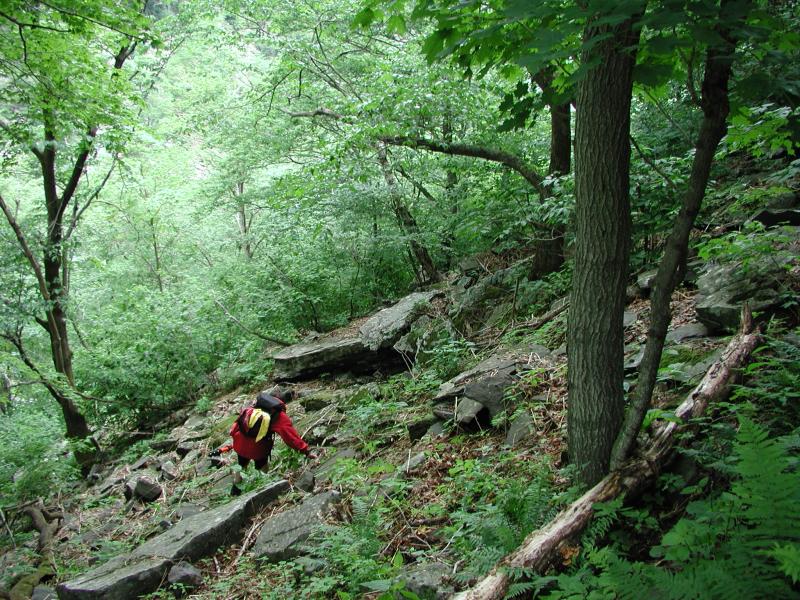 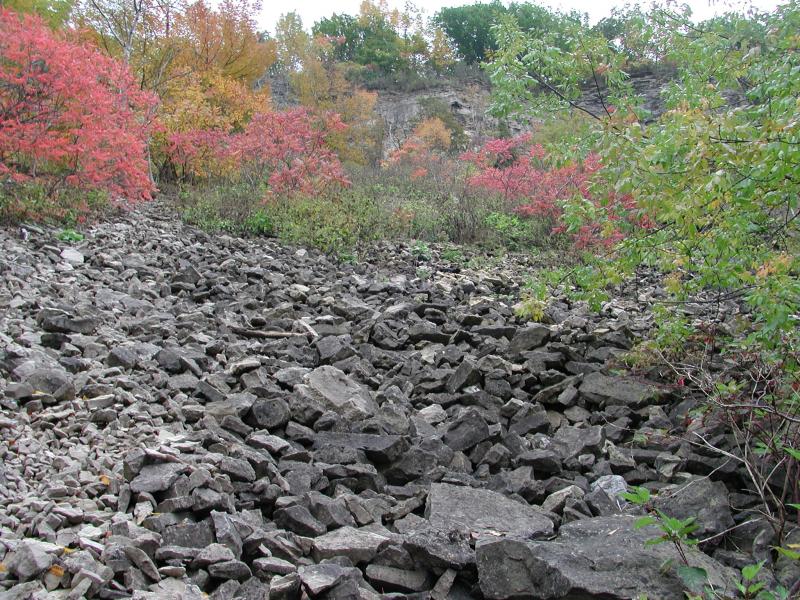 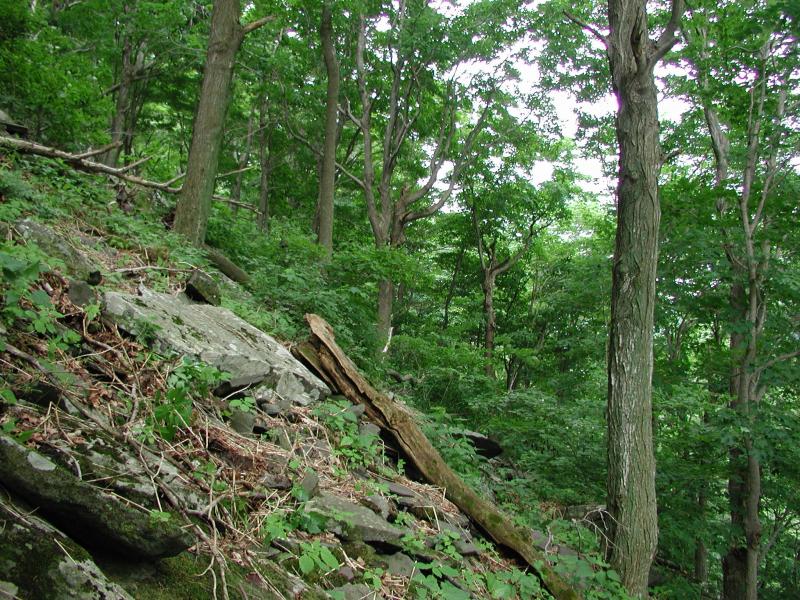 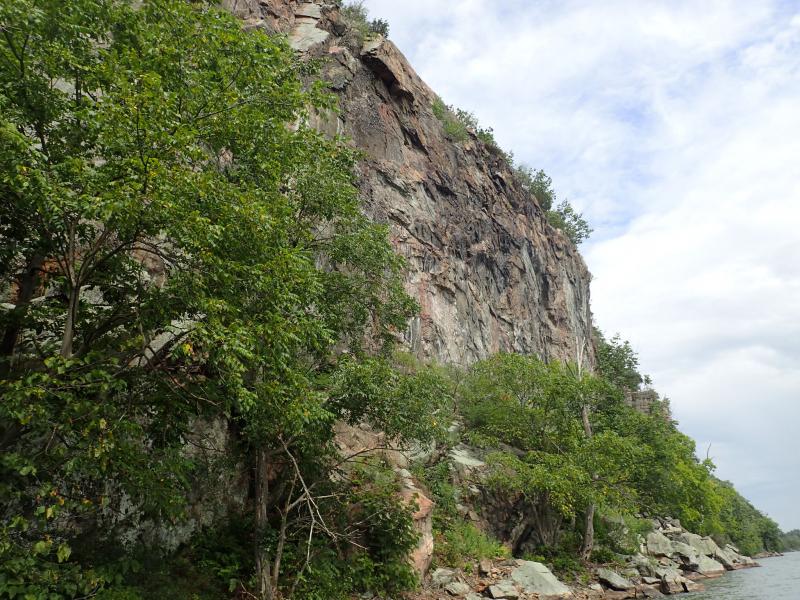 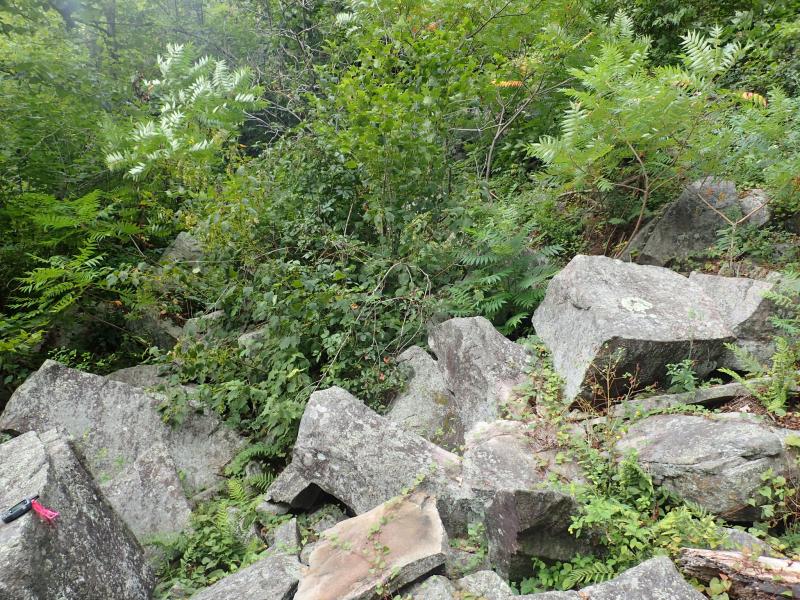 This figure helps visualize the structure and "look" or "feel" of a typical Calcareous Talus Slope Woodland. Each bar represents the amount of "coverage" for all the species growing at that height. Because layers overlap (shrubs may grow under trees, for example), the shaded regions can add up to more than 100%.