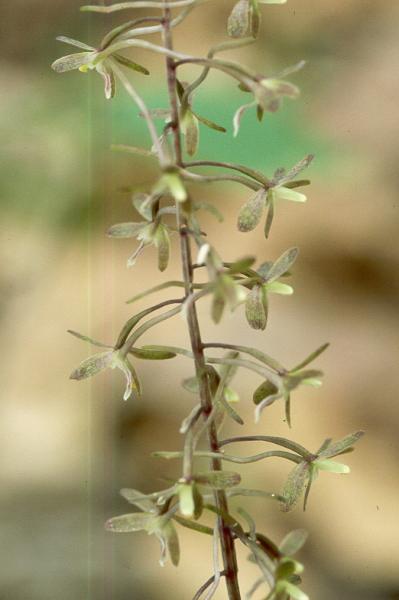 The leaves are green on top and purple on the bottom, giving this orchid its species name which means two colors (Fernald 1950). Many hours have been spent looking for an old record of this orchid in the woods near Montauk Point but it has never been rediscovered.

There is one small existing occurrence of about 50-100 plants. It is subject to some direct disturbance from visitors to the park where it occurs. There are three populations from 1878 and the early 1900s that need to be resurveyed to see if they still exist. Four additional populations from New York City are now extirpated because their habitat has been destroyed.

The short-term trend appears to be stable, although the population numbers fluctuate from year to year.

S the long-term trend is strongly negative. even populations were known in the past but only one population remains. Additional surveys are needed in a few areas but finding more plants is unlikely.

The failure to maintain sufficient woodland buffer around the plants and prevent direct disturbance is a threat.

Maintain a natural buffer around the population and restrict direct access to the plants by rerouting trails away from the area they occupy.

More detailed information on the habitat preference of this species is needed because the existing population occurs in a seemingly common forest type.

The plants are located in a mesic, rich (apparently acid) woods with oak, beech and maple that is quite swampy with a shrubby to open understory. The plants are in leaf litter. A historical record grew in wet woods with laurel and holly (New York Natural Heritage Program 2012). Rich damp woods (Gleason and Cronquist 1991).

This orchid is currently known only from Suffolk County, Long Island. There are historical records from Staten Island, Manhattan, and Monroe County. There are also old unconfirmed reports from Onondaga County.

This is common in the Southern States from East Texas northeast through the Virginias and North Carolina. There are scattered populations north into Oklahoma, Missouri, Illinois, Indiana, Ohio, and Michigan and also up the East Coast from New Jersey and Pennsylvania to eastern Massachusetts. It is mostly absent from eastern Georgia and the lower peninsula of Florida.

Cranefly orchid flowers are produced in midsummer and grow on a very slender stem that is 2-5 dm tall. The inflorescence is a spike of many drooping flowers, then fruits, 1-2 decimeters long. The narrow sepals and lateral petals are 4-8 mm long and greenish-purple with purple veins. The lip is pale purple and translucent, 4-8 mm long with basal lobes that are nearly semicircular with ragged edges. The long lobe of the lip is linear and arched forward with the tip facing out. The margins are rolled under. The whitish spur is 15-22 mm long and the column 3-4 mm long. A single leaf is produced at ground level in the fall and persists through the winter into the early spring. It is wide-elliptic in shape, 5-10 cm long and 2.5-7 cm wide, with a 5 cm long petiole. It is somewhat pleated along the veins and greenish on top and shiny purple below.

Distinguishing characteristics: easiest to identify from solitary winter leaf that vaguely resembles a Plantago leaf, but is thin, wrinkled, with some purple markings on top, underside of leaf completely pale purple, disappearing before or soon after flowering; flowers with a distinct slender and elongate spur, spur about 2 cm long, twice as long as ovary; anther quickly shriveling; capsules slender, reflexed. Best life stage for ID: in leaf or in flower. Characteristics needed to ID: winter leaf or summer flower.

The plan can be identified with winter leaves or with summer flowers.

Calypso and Puttyroot orchids also have winter leaves which are somewhat pleated and purple below but their ranges are north of Long Island and do not overlap. No other orchid has flowers similar to cranefly orchid.

The time of year you would expect to find Cranefly Orchid vegetative, flowering, and fruiting in New York. 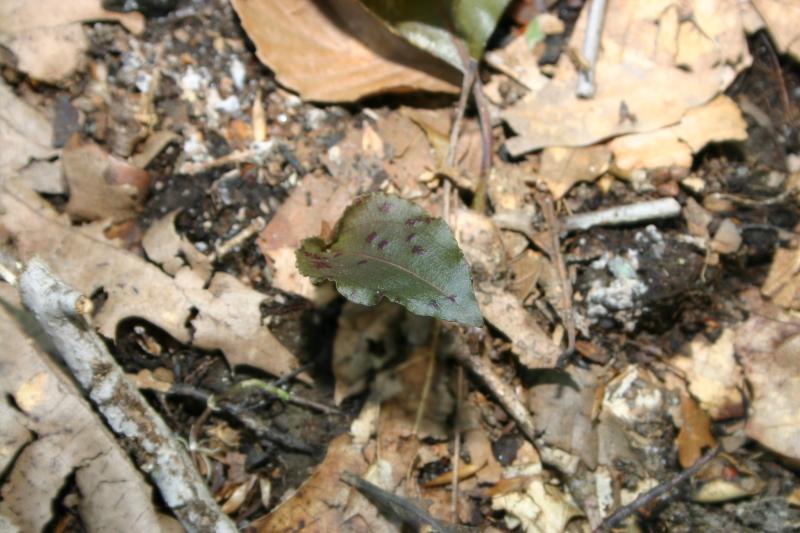 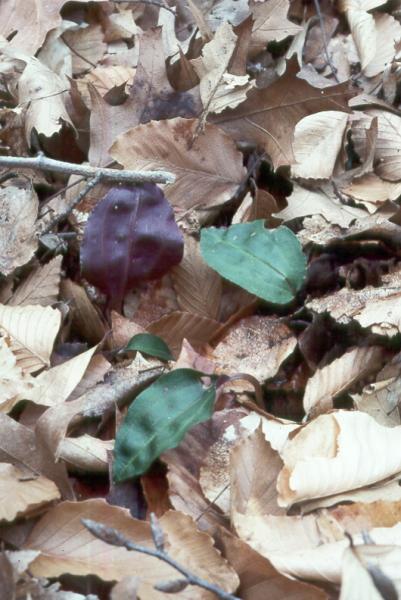