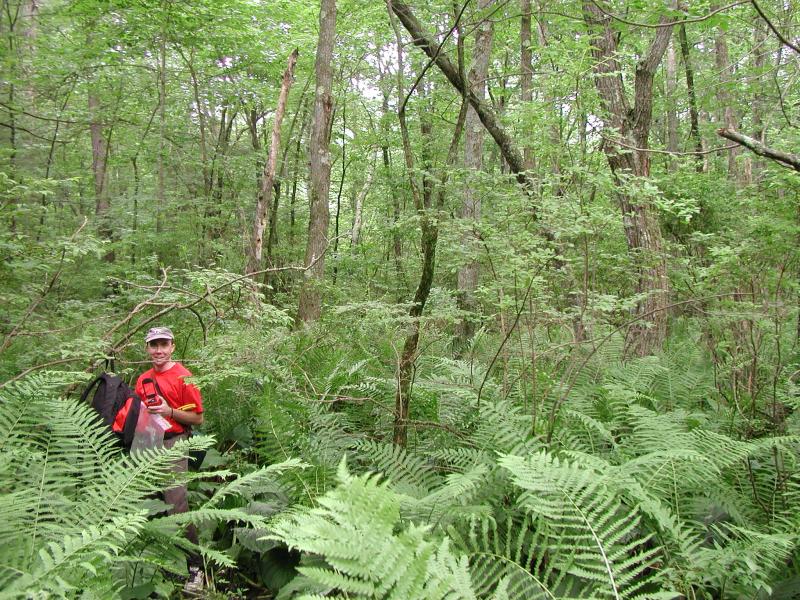 Jewelweed, or touch-me-not, is an herb found in red maple-hardwood swamps. Its name comes from the jewel-like silvery coating on its leaves that is only evident when the leaves are submerged in water. The silvery covering is actually a thin layer of air trapped in microscopic leaf hairs. The plant was nicknamed touch-me-not because of its seed capsules, which split and coil when triggered by the wind or a touch, expelling the seeds and dispersing them up to four feet away.

The number and acreage of red maple-hardwood swamps in New York have probably declined slightly to moderately in recent decades in areas with ash decline, and stable elsewhere as a result of wetland protection regulations. Since World War II, urbanization has emerged as the predominant force impacting wetlands in most parts of the region (Golet et al. 1993).

The number and acreage of red maple-hardwood swamps in New York have probably declined substantially (about 80%) from historical numbers likely correlated with agricultural and other development. The principal causes of wetland loss in the Northeast prior to mid-1800s include conversion of wetlands to agriculture, the construction of impoundments for hydropower and water supply, and the cutting of swamp timber for lumber, fence posts, and fuel wood (Golet et al. 1993).

Red maple-hardwood swamps are threatened by development (e.g., agriculture, residential, commercial, roads), habitat alteration (e.g., excessive logging, pollution), and recreational overuse (e.g., hiking trails, ATVs). Alteration to the natural hydrological regime is also a threat to this community (e.g., impoundments, blocked culverts, beaver). Several red maple-hardwood swamps are threatened by invasive species, such as common buckthorn (Rhamnus cathartica), glossy buckthorn (Frangula alnus), shrubby honeysuckle (Lonicera morrowii), multiflora rose (Rosa multiflora), and barberry (Berberis thunbergii). Conversion of wetlands for agriculture was a major cause of inland wetland loss in many areas of the Northeast historically, and it is still an important factor today, most notably in New York (Golet et al. 1993). The emerald ash borer (Agrilus planipennis) is an Asian beetle that infests and kills North American ash trees. All native ash trees are susceptible, including white ash, green ash, and black ash. In New York, emerald ash borer has been found mostly south of the Adirondack Mountains, but in 2017 it was recorded in Franklin and St. Lawrence Counties. Natural communities dominated or co-dominated by ash trees would likely be most impacted by emerald ash borer invasion.

This community is known throughout the state except perhaps at the southern portion of Staten Island, where the community is replaced by the related red maple-sweetgum swamp. Apparently also absent from the higher elevations of the central Adirondacks and adjacent foothills (possible very small, scattered occurrences in the latter area). Different variants are concentrated in different ecoregions.

A hardwood swamp that occurs in poorly drained depressions, usually on inorganic soils with peat, if present, that is less than 20 cm deep. This is a broadly defined community with many variants. In any one stand red maple is either the only canopy dominant, or it is codominant with one or more hardwoods such as ash, elm, and birch. Blackgum (Nyssa sylvatica), sweetgum (Liquidambar styraciflua), and swamp white oak (Quercus bicolor) if present, are only minor associates. The shrub layer is usually well-developed and may be quite dense. The herbaceous layer may be diverse and is often dominated by ferns.

A swamp dominated by red maple and hardwoods, such as ash, elm, and birch with little or no peat development. Blackgum, sweetgum, and swamp white oak if present, are only minor associates.

Known examples of this community have been found at elevations between 10 feet and 1,710 feet.

Because the characteristic plants of red maple-hardwood swamps are deciduous trees, it is easiest to identify the community during the growing season, from late May through summer. Striking seasonal leaf color can be enjoyed in the fall. 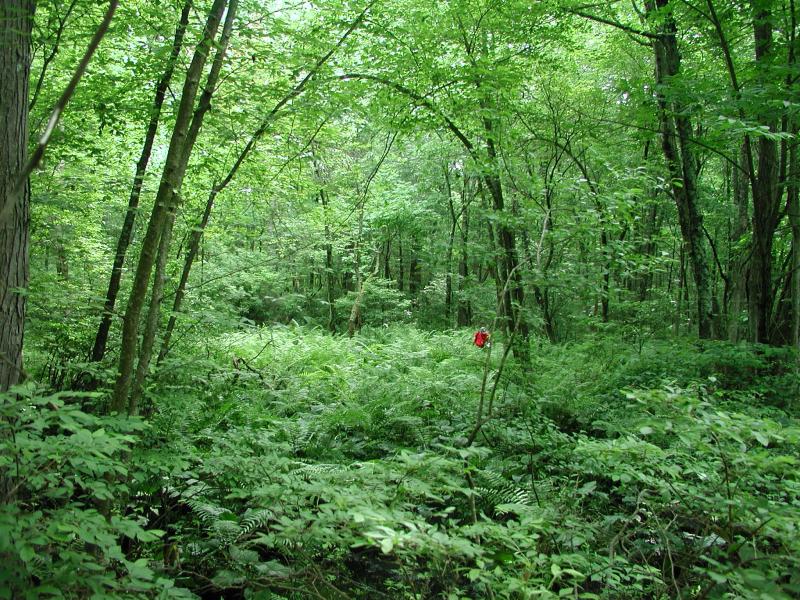 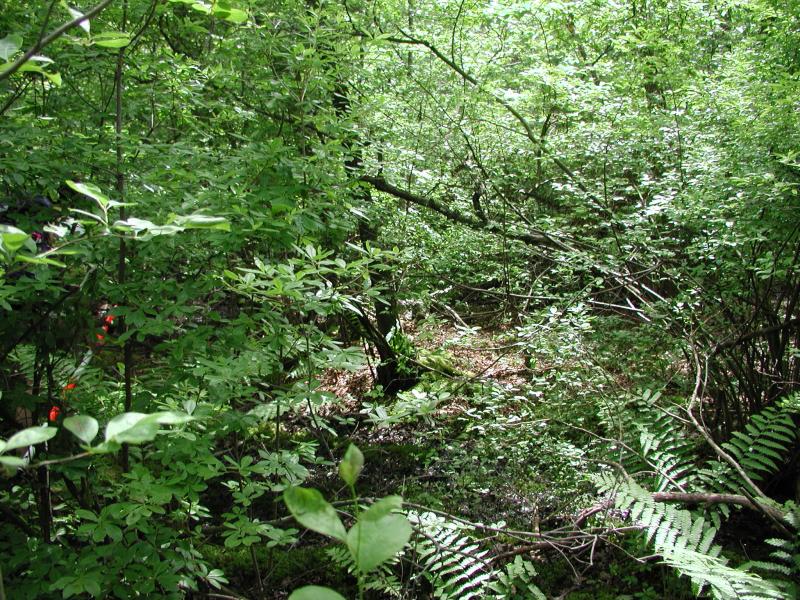 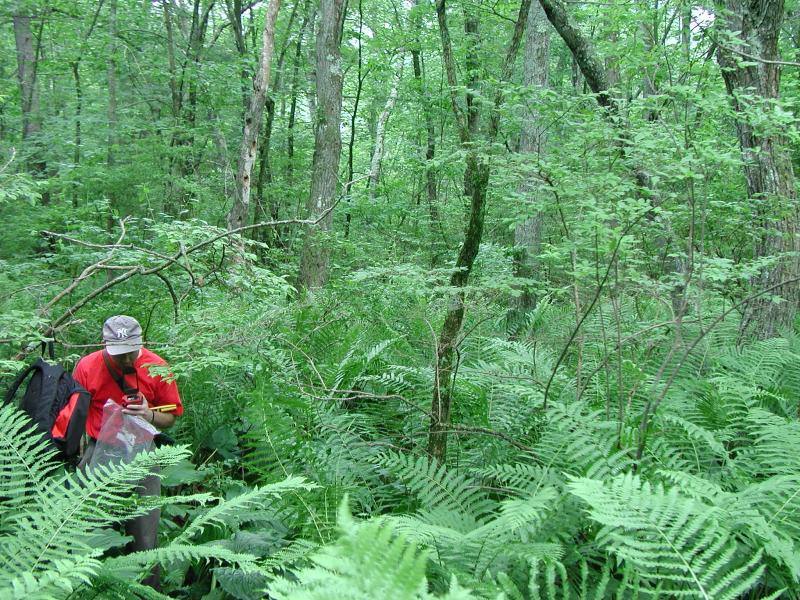 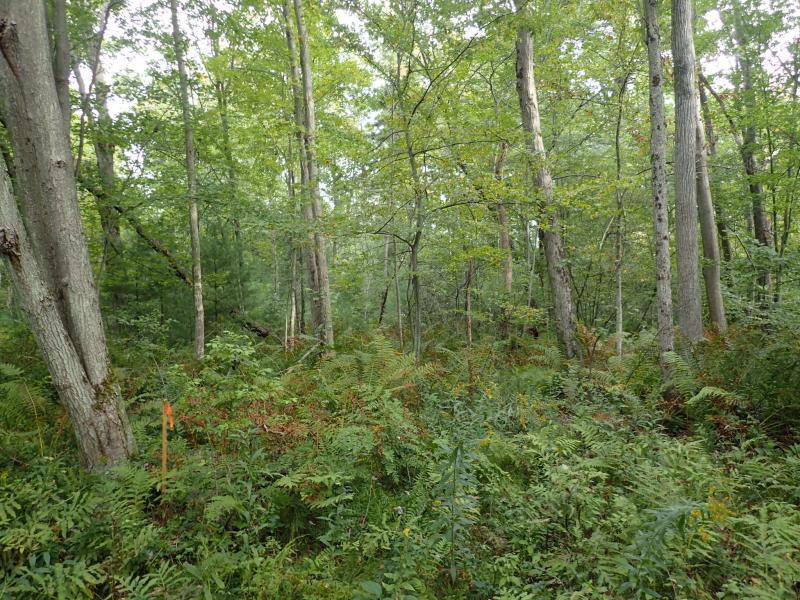 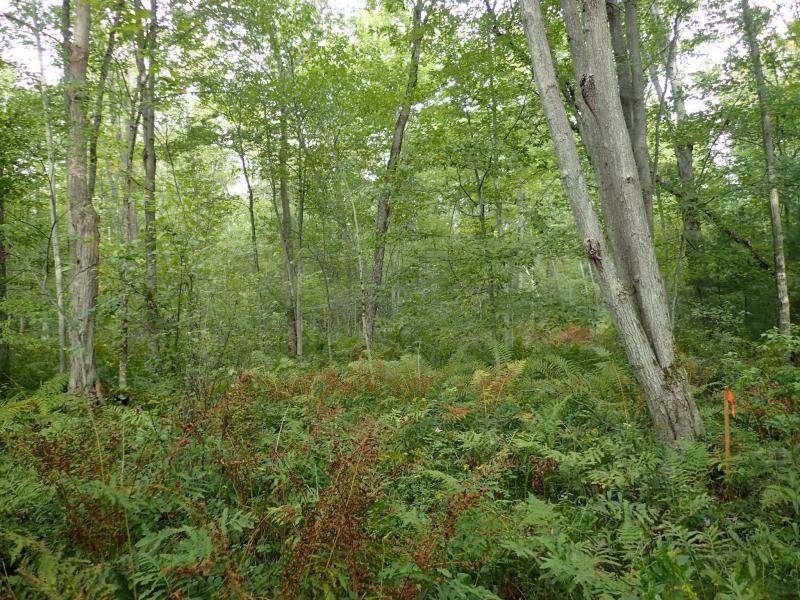 This figure helps visualize the structure and "look" or "feel" of a typical Red Maple-Hardwood Swamp. Each bar represents the amount of "coverage" for all the species growing at that height. Because layers overlap (shrubs may grow under trees, for example), the shaded regions can add up to more than 100%.