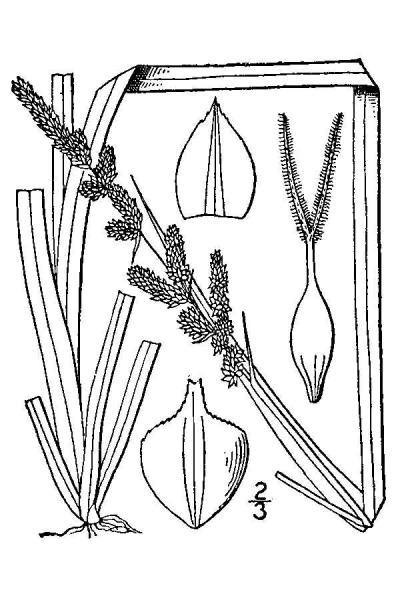 State Conservation Status Rank
SH
Historical (Possibly extirpated) in New York - Missing from New York; known only from historical records (more than 30 years ago), but still some possibility of rediscovery upon further searching.
Global Conservation Status Rank
G3G4
Vulnerable globally, or Apparently Secure - At moderate risk of extinction, with relatively few populations or locations in the world, few individuals, and/or restricted range; or uncommon but not rare globally; may be rare in some parts of its range; possibly some cause for long-term concern due to declines or other factors. More information is needed to assign either G3 or G4.

This species is rare and local throughout its range and very rare in the north but Carex decomposita appears to prefer the most inhospitably thick buttonbush swamps. Therefore, perhaps it is more common than believed but simply difficult for people to penetrate the habitat it prefers. The specific epithet decomposita means decompound in reference to the much compound inflorescences (Fernald 1970).

There are no known populations of this plant in New York, but at least six historical locations have been recorded. These sites are either on floating logs or within difficult to survey buttonbush swamps. There is a high likelihood that this is hiding out somewhere within New York, but it is probably a very local and very rare plant within the state. More survey effort is needed in an attempt to relocate this plant.

No populations have been seen in recent years so, the short term trends are unknown.

No threats are known.

Surveys need to be continued at all historical localities. Surveys will probably be most successful if conducted by boat around the edges of the perspective ponds and lakes with close attention being paid to floating logs and bases of Cephalanthus or perhaps Decodon or other shrubs. In addition, it is important that surveys happen at the appropriate season (when the plants are in fruit) to facilitate easily seeing this plant from a distance.

There is no specific habitat data known for New York but C. decomposita probably occurs or occurred at the edges of ponds or lakes on floating logs or the bases of Cephalanthus or perhaps Decodon shrubs (New York Natural Heritage Program 2006). Blackwater swamp forests, often growing on cypress knees, cypress bases, or fallen logs (often at or near water level) (Weakley 2006). Marshes, swamp forests, usually on rotten stumps, floating logs, or bases of trees (often Taxodium) or shrubs (Cephalanthus) on lake, pond, and slough margins (Cochrane 2002). Wooded swamps, often on floating longs and bases of trees (most often Taxodium) (Fernald 1970).

Carex decomposita is only known from a few historical records in western New York and one from Oneida County. The northeastern edge of this species' range is in New York.

Carex decomposita is mainly a southeastern species and is most frequent in the Mississippi alluvial plain. It is rare and local throughout its range and is very rare in the north. It ranges from Texas east to Florida and north to New York, Ohio, Michigan, Missouri, and Oklahoma (Fernald 1970, Cochrane 2002).

Cypress knee sedge is a densely tufted grass-like perennial. Its leaves are strap-like and 2.5-7.0 mm wide. Stems are 5-120 cm tall and towards its apex numerous secondary stems branch off of the main stem. Along these secondary stems as well as at the apex of the main stem are dense flower/fruit clusters (spikes). These spikes are densely arranged and are composed of separate female and male flowers. Female flowers develop into deep olive green to brown fruits (perigynia) which are 1.8-2.6 mm long (Cochrane 2002).

Carex decomposita is densely cespitose. Leaf sheath fronts (adaxial surfaces) are concave at the summit, not prolonged beyond their junction with the blades, and dotted with purplish red. The blades are 2.5-5.5(-7.0) mm wide. The inflorescences are (6-)7-15(-18) cm long, branch, and are compound. The lower branches are widely separated and contain numerous spikes. Lower spikes are pistillate or androgynous. Upper spikes are androgynous. Perigynia are spreading, deep olive green to brown, and are 1.8-2.6 mm long (Cochrane 2002).

This species is relatively easy to identify when it has immature to mature perigynia. Perhaps the biggest challenge with finding this species is its rarity. When in fruit the inflorescences are large and plants should be visible from a distance.

Carex sparganioides is perhaps a little similar but it is an upland species and the lower branches of the inflorescences, if present, only have a few spikes and are short.

Carex decomposita starts to produce perigynia in mid-June and these persist till about the end of July or perhaps longer. Towards the end of this season the fruits are starting to shed. Therefore, the best time to survey for this species is from mid June till late July.

The time of year you would expect to find Large-panicled Sedge fruiting in New York.