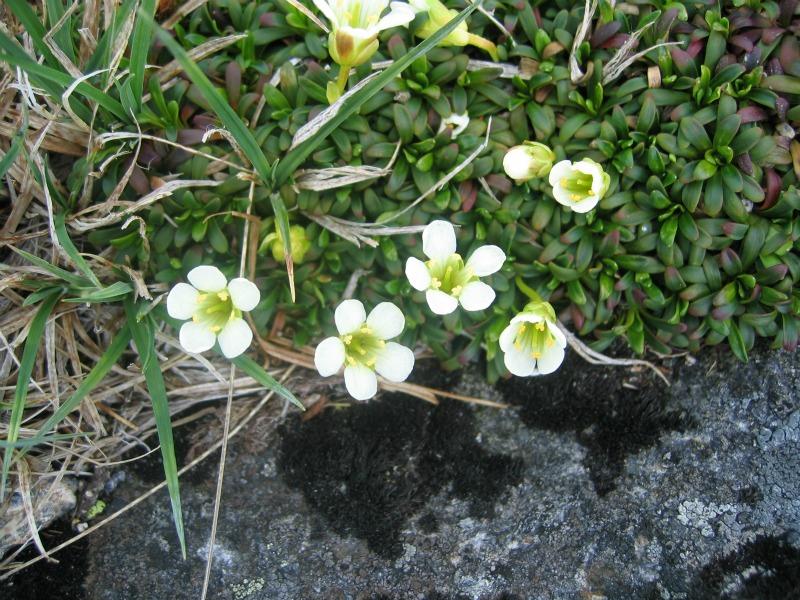 All members of the Diapensia family accumulate aluminum. Ash from leaves of Diapensia lapponica was documented to contain between 16-27% aluminum (Rönblom and Anderberg 2002). The only other plant in this family that grows in NY is Flowering Pixiemoss (Pyxidanthera barbulata), also a state rare plant. It grows in a very different habitat, however, in the coastal pine barrens of Long Island. The other variety of Diapensia lapponica, var. obovata, occurs in Alaska. Diapensia flowers are easily knocked off their stems, so care must be taken when studying them.

There are 13 verified populations which all occur within a very restricted range on the high peaks of the Adirondacks. The populations all occur on protected land and are somewhat threatened by recreational activities.

Increased hiker traffic in the high peaks region has clearly caused some damage to populations in the recent past. Many of the Diapensia lapponica populations are still quite large. The Summit Steward program which works to inform hikers of the fragile nature of alpine plants is helping to keep trampling damage to a minimum. Overall, it is clear that the size of populations has declined slightly over the recent past but it is unclear if this trend is continuing.

Clear long-term trends are unknown although no populations are known to have become extirpated. Left unchecked, global climate change will clearly reduce the size of the alpine areas in New York and therefore reduce the number and size of the Diapensia lapponica populations.

At almost all sites trampling by hikers threatens at least parts of the relatively small populations. Left unchecked, global climate change is also a threat.

Continued precise monitoring of populations is needed to assess how the populations are doing in the face of hiker traffic and global climate change.

Diapensia lapponica is restricted to the summits of the highest peaks in the Adirondacks. It occurs exclusively in the alpine zone in open meadows, around granitic rock outcrops, on mosses, and in small rock crevices. In these areas it also grows along trails. At times, it grows in open patches adjacent to dwarf heath land and krummholz (New York Natural Heritage Program 2007). Alpine summits (Gleason and Cronquist 1991). Alpine regions (Fernald 1970).

This species is at the southern edge of its range in the high peaks region of New York. In this part of New York it is restricted to alpine meadows of the highest peaks.

Diapensia lapponica var. lapponica occurs in eastern North America from Ellesmere Island in Nunavut east through Greenland and south to the high peaks of New England and New York. Its range extends east to Scandanavia and the western Russian arctic and subartic (Scott and Day 1983).

Pincushion plant is an appropriate name for this species due to its pincushion-like growth form. It grows in dense low tufts composed of crowded evergreen leaves .2 to .6 inches long, arising from short matted stems. The hairless leaves have a shallow groove running down the middle of the upper surface. The leaf edges are rolled halfway under giving an overall appearance of a slightly arched leaf; not flat. The showy white flowers are solitary on .25 to 1 inch long stalks. Flowers are often numerous and stick out on a short stalk above the leafy pincushions. They are approximately .25 to .5 inches long and have five petals that are fused at the base (Fernald 1970, Gleason and Cronquist 1991).

Diapensia lapponica is a densely cespitose, low subshrub that occurs in convex cushions of matted stems. Individual stems are up to 10 cm long and have mostly opposite, crowded leaves. The leaves are 5-15 mm long, leathery, narrowly spatulate, and evergreen. They are deep purple or red from autumn throughout the winter. The 1-4 cm long erect peduncles are solitary and terminal. The flowers are subtended by three bracts and have a deeply 5 lobed calyx and a 5 lobed campanulate white corolla. Capsules are enclosed in the persistent calyx (Fernald 1970, Gleason and Cronquist 1991).

This plant is easy to identify at any time of year although flowering individuals are ideal.

Diapensia lapponica var. lapponica is a very distinctive species and is easy to distinguish from all other species at all times of the year. A few other alpine species are superficially similar. Rhododendron lapponica which is an even rarer species in New York has leaves with small scales, especially beneath, and are in clusters at the ends of the branches. The woody clumps are not as dense as Diapensia. Loiseleuria procumbens, also a rare species in New York, has smaller, looser leaves which are even more curled under on the edges, deeply grooved on the upper midvein, and are hairy beneath with white cobwebby hairs. The clumps of Loiseluria are taller and the flowers are pink, not white as in Diapensia, with pointed not rounded petals. In flower, Minuartia groenlandia can appear superficially similar. It has leaves that are much narrower and the inflorescences are multi-flowered stems as opposed to being solitary on short stems in Diapensia lapponica.

Since Diapensia lapponica is evergreen and grows in open alpine meadows it is easy to see throughout the year when it is not covered by snow but it is most visible when in flower. Therefore, the best time to survey for this species is from late May through June although other times of the growing season will work well.

The time of year you would expect to find Diapensia vegetative, flowering, and fruiting in New York. 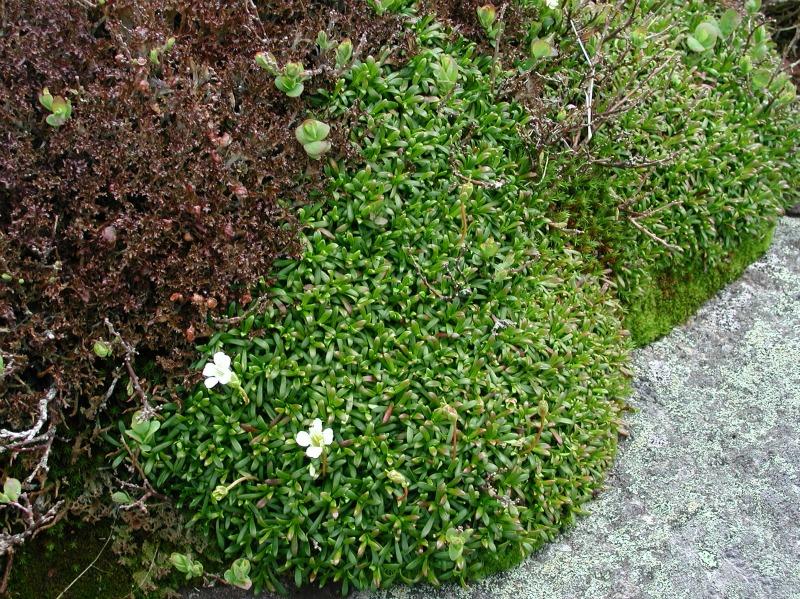 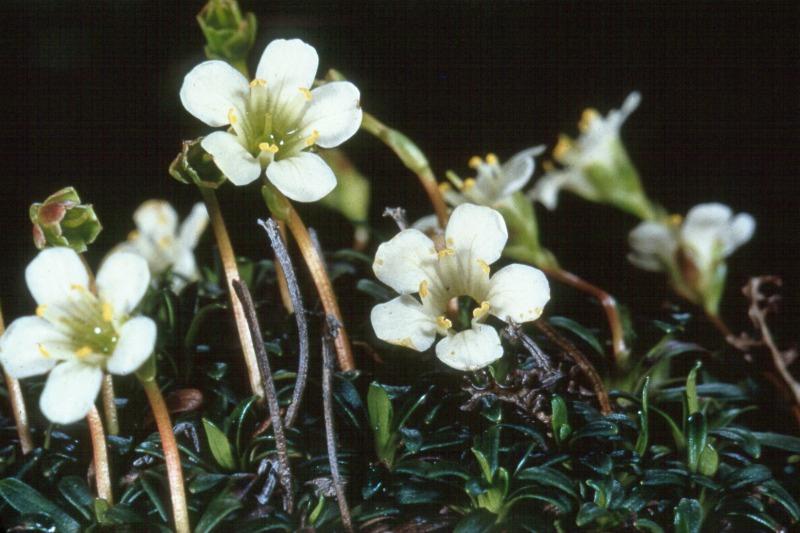 There are two accepted subspecific taxa recognized for Diapensia lapponica globally. Scott and Day (1983) recognize these taxa as subspecies while earlier authors recognized them as varieties. The subspecific taxa have distinct ranges and some morphological differences. Only var. (or ssp.) lapponica occurs in New York.

Rönblom, K. and A.A. Anderberg. 2002. Phylogeny of Diapensiaceae based on molecular data and morphology. Systematic Botany 27: 383-395.