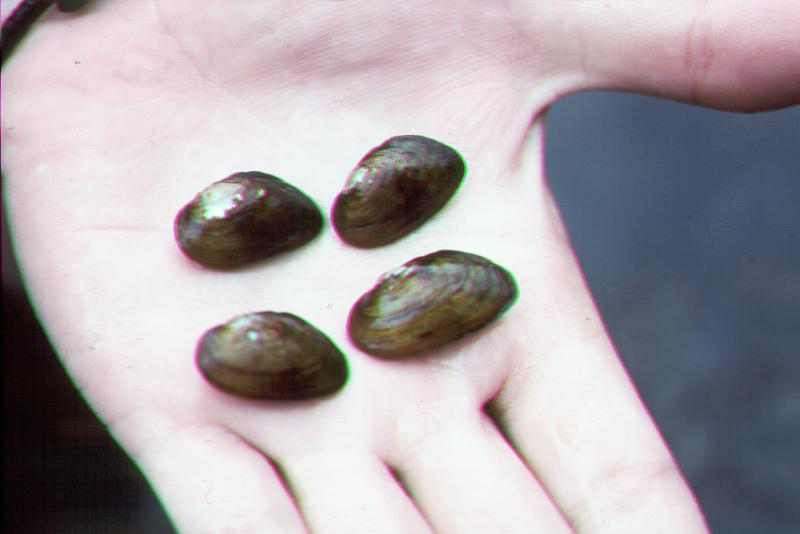 The Neversink River population, estimated at 20,000 individuals is one of the largest known populations in the U.S. (Strayer and Jirka, 1997).

The extent of this species in New York is mostly limited to a small area within the Upper Delaware River watershed. There was a single individual found in the Housatonic watershed in 2007. The Neversink River population, a tributary of the Delaware, dropped by an estimated 60,000 individuals between 1990 to 1994 and continues to be vulnerable to a myraid of stressors that affect aquatic systems, including non-point pollution and existing impoundments (Strayer et al. 1996).

The Neversink River population has apparently declined by 75% since it was first located in 1990 when it dropped from an estimated 80,000 individuals to 48,000 in 1991, then to 20,000 in 1994 (Strayer et al. 1996). It is not known if the population still numbers in the tens of thousands since the last known survey almost two decades ago. Since these population estimates are based on the direct capture of only a small number of individuals and standardized monitoring methods have only recently been adopted for Unionids (Strayer and Smith 2003) the estimates may not be accurate, nor directly comparable. The short-term trend for the Delaware River (meta)population is not known at this time because the sites have not been monitored since they were first located by U.S. Geological Survey researchers in 2000 (Lellis 2001).

All 13 major populations studied rangewide, including the Neversink River in New York, had low densities, similar to earlier 20th century observations. About 100 years ago the species was known from about 70 Atlantic seaboard river systems, but now from only 25-30 (USFWS, 1993). Similar declines in the distribution of dwarf wedgemussels have undoubtedly occurred in New York. However, since the Recovery Plan was published in 1993, increased survey effort has led to the discovery of 40 new locations where the species had been presumed extirpated, or in rivers where it had never been found (Nedeau 2005). Of the 70-80 known locales in 2004 only16 were believed to support reproducing populations, while 31 were based on observations of five or fewer individuals, or solely on spent shells.

Water pollution and impoundments are the primary threats. This species requires a low silt environment with a slow to moderate current, a situation that dams alter both upstream and downstream of the impoundment. A wide array of industrial, agricultural and domestic pollutants have been responsible for the Dwarf Wedgemussel's disappearance from much of its historical range and continues to be a problem in most aquatic systems (USFWS 1993). The darter and sculpin glocidial host fish species (Johnny Darter (Etheostoma nigrum), Tesselated Darter (Etheostoma olmstedti), Slimy Sculpin (Cottus cognatus) and Mottled Sculpin (Cottus bairdi)) are generally pollutant sensitive taxa and a healthy fish assemblage is critical to viable mussel populations (Pinkney et al. 1997). The low densities (< 0.5 per square meter) in which this species occurs is problematical since successful reproduction is density dependent. Females need to be in close proximity to a sperm-releasing male to be successfully fertilized (Strayer et al. 1996). Competition with exotic bivalves, both the Asian Clam (Corbicula fluminea) and Zebra Mussel (Dreissena polymorpha) could pose a threat because they are expected to eventually invade all of New York's watersheds, although neither has yet invaded the upper Delaware system (Strayer and Ralley 1991). The majority of 45 individuals collected from the Neversink population were 4 and 5 year old specimens, and none were older than 8 years (Michaelson and Neves 1995). This indicates recent successful reproduction. However, since this species can live at least 20 years, and perhaps much longer, the lack of older individuals in the popualtion could indicate high rates of mortality of older animals, possibly from pollution. Ageing Unionids by counting growth rings has recently been shown to vastly underestimate the true age of individuals, so the ages cited above may be too low by up to an order of magnitude (Strayer 2004).

When feasible, the removal of impoundments in order to restore rivers to their natural flow would be beneficial. The Nature Conservancy negotiated with the Army Corps of Engineers for the removal of the Cuddebackville Dam in the summer of 2003 in order to restore natural flow patterns to the lower Neversink and is working to reduce alterations to the natural flow caused by the upstream Neversink Reservoir Dam. The outcome of this management strategy on the mussel populations has not been evaluated. The U.S. Fish and Wildlife Service has suggested that reintroductions may need to be undertaken to bring low-density populations back up to viable levels and re-establish populations extirpated from certain rivers (USFWS 1993).

There is still much to learn about this species, including confirmation of host fish(es) in the Delaware and the Neversink rivers, diet, age and growth, and mortality factors. Details about habitat requirements (current speed, water depth, substrate grain size, substrate stability, water temperature, and water quality factors) also need work. However, Strayer and Ralley (1993) found that the distribution of this species was not related to these typical physical habitat qualities, but instead to long term stability of the substrate (i.e., flow refuges). Both large and smaller scale forces promoting the patchy occurrence of Unionid mussel beds is an active area of research (Strayer 2004).

In New York, Dwarf Wedgemussels live embedded in the fine sediment that has accumulated between cobbles in slow to moderate current and relatively shallow water (40 cm) in small cool water rivers and similar habitat in larger rivers (Strayer and Jirka 1997).

Known populations occur in the Upper Delaware River in Sullivan and Delaware Counties and one of its major downstream tributaries, the lower Neversink River in Orange County. One individual was found in 2007 from Webatuck Creek in the Housatonic basin in Dutchess County.

Today Dwarf Wedgemussels are discontinuously distributed along Atlantic seaboard drainages from New Hampshire to North Carolina (New Hampshire, Vermont, Connecticut, Delaware, New York, New Jersey, Pennsylvania, Massachusetts, Maryland, District of Columbia, Virginia, North Carolina), but in 1999 it was declared extirpated from New Brunswick. The Dwarf Wedgemussel was first described from the Schuylkill River in Pennsylvania although it has not been seen in that river since 1919. Historically known from about 70 locations in 15 major drainages (Strayer et al. 1996), it was listed as a federally endangered species in the United States in 1990. When the federal recovery plan was published three years later, the Dwarf Wedgemussel was known to exist in only 20 of 70 locations where it had originally been known to occur. Most of the populations were thought to be small and declining. Since the federal recovery plan was published in 1993, surveyors have found nearly 40 new populations in locations where the species had been presumed extirpated or in rivers where the species had never been found (Nedeau 2005).

Alasmidonta heterodon is a small freshwater mussel, usually less than 55 mm long. Its shell is "subrhomboidal to subtriangular, with a prominent posterior ridge. The beak sculpture consists of two concentric ridges surrounded by two to three trapezoidal ridges along the posterior slope. [The] periostracum is greenish to brownish, often with numerous fine green color rays. Both pseudocardinal and lateral teeth are present [and the] nacre is white" (Strayer and Jirka 1997).

Adults of this species are sessile with only limited movement in the substrate. Passive downstream movement may occur when they are displaced from the substrate during floods. More major dispersal occurs while glochidia are encysted on their darter and sculpin hosts, although McLain and Ross (2005) showed that tesselated darters move very little which promotes a patchy distribution of mussel beds. Being ectothermic, activity levels are reduced greatly during colder months of the year. This is a long- term brooder that spawns in late summer, becomes gravid in the fall and the larvae become active the following spring (Michaelson and Neves, 1995).

Little is known about the activity periods of Unionid mussels but they are presumed to be greatly reduced during cold times of the year. Freshwater mussels are most often easiest to locate during late summer when water levels are lowest. This species is a long-term breeder (winter-early spring) (Clarke 1981) and larvae (glochidia) are released into the water from early March to June (Wicklow 2004).

The time of year you would expect to find Dwarf Wedgemussel present, active, reproducing, and larvae present and active in New York. 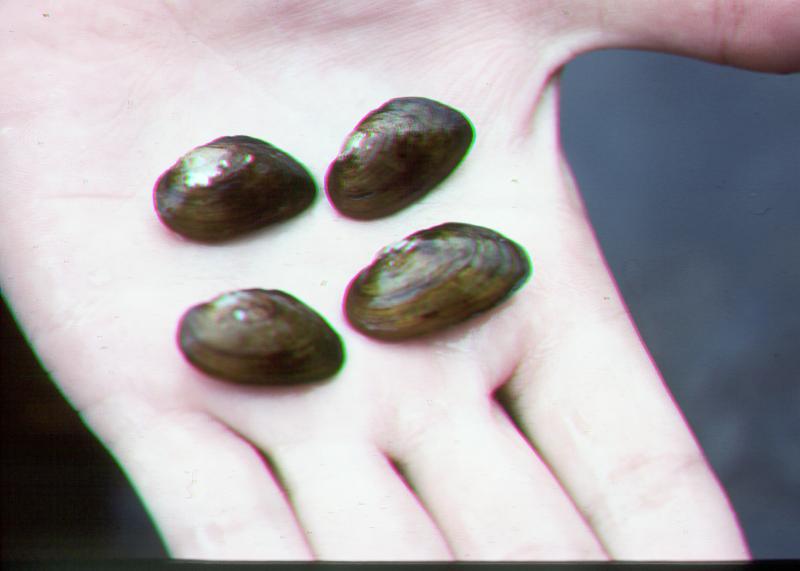 Master, L. 1986. Alasmidonta heterodon; results of a global status survey and proposal to list as an endangered species. A report submitted to Region 5 of the USFWS, Hadley, Massachusetts. 10 pp.

McLaine, D.C., and M.R. Ross. 2005. Reproduction based on local patch size of Alasmidonta heterodon and dispersal by its darter host in the Mill River, Massachusetts, USA. Journal of the North American Benthological Society 24:138-147.

Strayer, D.L. and J. Ralley. 1993. Microhabitat use by an assemblage of stream-dwelling unionaceans (Bivalvia) including two rare species of Alasmidonta. Journal of the North American Benthological Society 12(3):247-258.

This guide was authored by: Jeff Corser

Information for this guide was last updated on: April 9, 2019