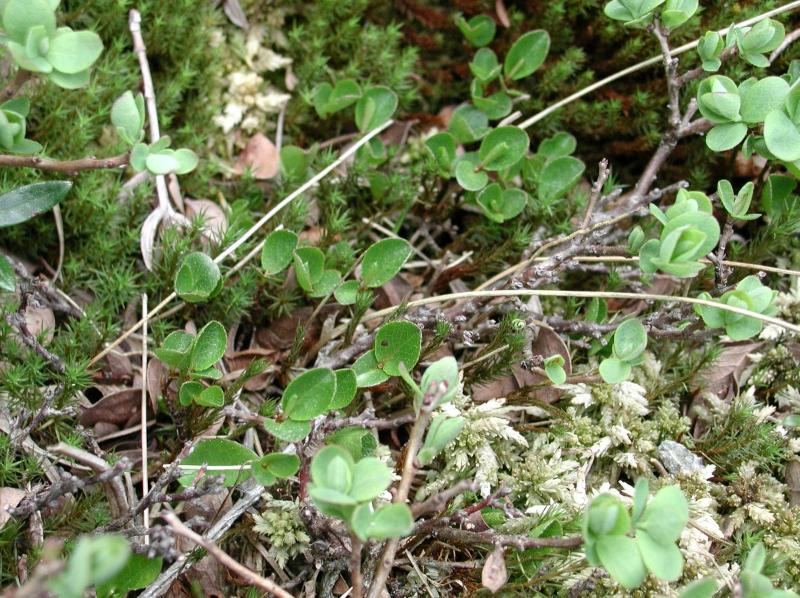 The specific epithet herbacea means herb-like, or not woody, and is in reference to how this shrub is very small and may appear to be an herb. At present, this species is very rare in New York and is restricted to our highest mountain, Mt. Marcy.

There is only one known population. This population has between 1 and 10 genetically distinct colonies. There is also one historical population documented by a specimen from 1923. A non-documented report indicates that one individual was seen from this population in 1980, but since then no plants have been seen, even though this population was intensively searched for by botanists who knew the exact location of the plants. Therefore, this second population is believed to be extirpated.

Only two populations (historical and extant) have been known from New York. The one population that is believed to have become extirpated is reported to have been extant as recent as 1980. Until the plants were found on Mount Marcy in the 1990s, this species was considered extirpated from New York. Data on short term trends of the one extant population is not known. Overall, it appears that this species is declining in the short term.

One of the two known populations of this species has become extirpated for unknown reasons. The one extant population is very small. Therefore, this species is declining in the long term and is in serious jeopardy of becoming extirpated from the state in the near future.

Trampling by hiker traffic is a threat. During at least one season, a late summer drought caused desiccation and yellowing of leaves. Left unchecked, global climate change is an additional threat.

If the one extant population appears to be declining or if for other reasons it is deemed that this population is vulnerable, efforts should be made to augment the population.

Precise, consistent, and regularly collected data on the size of the one extant population is needed. Surveys to search for a new population on Mount Haystack have been recommended (Ed Ketchledge, personal communication). When survey work is being conducted on Algonquin Peak, Salix herbacea should be looked for, but since the population on this mountain is believed to be extirpated, additional efforts should not be dedicated to searching for this species at this site.

In New York, Salix herbacea is restricted to the alpine zone of only two (at least historically) of the highest mountains in the Adirondacks. In this area it occurs in a seep at the base of a cliff and in an alpine meadow (New York Natural Heritage Program 2007). "Snow beds and other places with good snow protection, well-drained river banks, streams and ponds, sandy beaches, boulder ridges, steep bouldery slopes, sphagnum hummocks, or in marshes; on organic sand and sandy-gravel derived from granite, gneiss, schist, shale, arkose sandstone, or dolomitic limestone substrates, usually on non-calcareous substrates but can grow in places exposed to sea-spray" (Argus 2005). Arctic regions, south to mossy alpine areas on granitic, siliceous, or schistose mountains (Fernald 1970).

In New York, this species is currently only known from Mount Marcy in the Adirondacks. It was also historically known from Algonquin Peak but that population is believed extirpated.

This species occurs in northern area on both sides of the Atlantic. It is known from the Northwest Territories east to Greenland, the British Isles, Scandinavia and Russia, south in North America to Manitoba, Quebec, northern New York, and northern New England (Argus 2005).

Dwarf willow lives up to its name in being a very tiny shrub, only 0.5-5.0 cm tall. It occurs in colonies with trunks and main braches growing underground and only the upper branchlets sticking above the ground. These upper branchlets have 2-6 leaves. The leaves, which are green on both sides, area about 1/2 to 1 and 1/4 inches long and without hairs. The leaf margins are arched upward to produce a shallow cup, and the veins are conspicuous. Like all willows, the flowers are small and occur in tight clusters called catkins. The catkins arise in the middle of the two upper leaves, giving the appearance of a catkin in a bowl of leaves. Catkins are composed entirely of either male or female flowers and individual plants have either all male or all female catkins. This species flowers as the leaves are opening. Female catkins are 1/8 to 1/2 inches long and are composed of 2-11 flowers. The female flowers develop into capsules which may be up to 1/3 inches long (Fernald 1970, Argus 2005).

Salix herbacea forms rhizomatous colonies and is 0.5-5.0 cm tall. The leaves lack stipules and have short petioles (1.5-7.0 mm long) The leaf blades are 6-21(-34) mm long, round to broadly elliptic, almost as wide as long to wider than long, crenulate and upturned on the margins, cordate to sub-cordate at the bases, and rounded or retuse at the apices. The adaxial leaf blade surfaces are glabrous, green, and shiny while the abaxial leaf blade surfaces are glabrous, green, and not glaucous. Catkins arise from apical buds and flower as the leaves emerge. The styles are 0.2-0.4 mm long (Argus 2005).

This species can easily be identified vegetatively when the leaves are fully expanded. Information on habitat and habit are particularly useful and should be noted along with the color of the upper surface.

Salix herbacea is a very distinctive willow that in New York occurs only in alpine regions.

Salix uva-ursi is the other dwarf willow that occurs in alpine areas in New York. It can be distinguished by its leaves, which are glaucous abaxially and much narrower, with an acute apex. Its styles are 0.4-1.0 mm long.

Salix pyrifolia is a taller willow which often occurs in high elevation sites. It can be distinguished by its height (0.4-4.0 m tall) and much larger leaves, which are glaucous abaxially and have an acute to acuminate apex.

The time of year you would expect to find Snowbed Willow vegetative, flowering, and fruiting in New York.

The hybrid Salix x peasei (Salix herbacea x S. uva-ursi) is known from New Hampshire and areas to the north, but has never been reported from New York (Fernald 1970, Argus 2005).

Information for this guide was last updated on: October 16, 2009