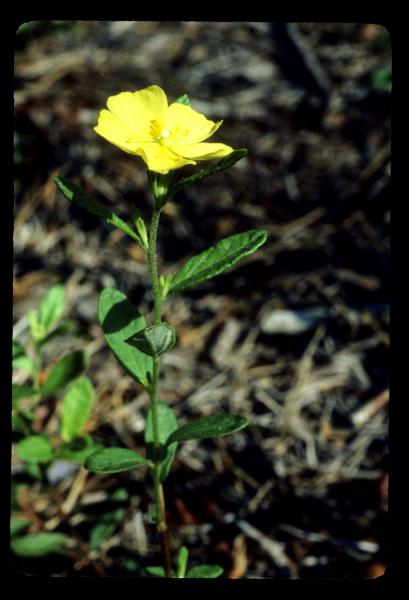 In his 1981 publication Rare Plants of New York State, Richard Mitchell regarded this plant as extirpated in New York since it had not been seen since 1925. Natural Heritage survey work by Bob Zaremba in the mid-1980s confirmed that this plant was still present at Hempstead, Long Island, and at seven more sites east to Montauk.

There are six existing populations, but additional surveys are needed to evaluate their current status. This species has not been widely targeted for surveys, so more populations should be found. There are 10 historical occurrences, but many of these are considered extirpated from western Long Island.

The short-term trend is unknown due to lack of recent surveys.

The biggest threat to this species is the succession of its woodland opening habitat to woody species that would convert the openings to forest and prevent germination. A seed bank can maintain the population for some time until disturbance returns however. Some populations also occur along trails, right-of-ways, or roads where the open habitat is maintained, but the plants are still threatened by direct disturbance such as displacement by exotic species, trampling, improper mowing, herbicide or bicycle use.

Some hybridization is known to exist with other Crocanthemum species on Nantucket and we should determine if this is happening on Long Island as well.

This is currently only known from Nassau and Suffolk counties on Long Island.

Early frostweed is found along the Atlantic Coastal Plain from New Hampshire to North Carolina and inland from Pennsylvania south to Tennessee.

Early Frostweed is a low-growing (up to 30 cm) perennial herb species with stems up to 30 cm tall growing from a creeping rhizome. The leaves are alternate, the larger ones 1 to 3 cm long, and linear-spatulate to oblong linear in shape. It first bears a terminal cyme of 2 to 6 yellow flowers (often exceeded by later branches), and eventually closed cleistogamous flowers borne in the axils or tips of leafy branchlets. The fruit are capsules; those of open flowers are about 3 to 3.5 mm long and bear 12 to 15 seeds, while those of the cleistogamous flowers are 1.5 to 2mm long with 1 to 2 (3) seeds.

Flowers or fruit are necessary for identification.

Crocanthemum dumosum flowers from mid-May into late June. Fruits may persist through mid-October.

The time of year you would expect to find Low Rock Rose flowering and fruiting in New York.

Arrington and Kubitzki (2003) proposed reviving the segregate genus Crocanthemum for New World members of Helianthemum sensu lato based on morphology, nuclear and chloroplast DNA phylogenies, and geography. Their molecular work also shows that Hudsonia is nested within Crocanthemum but they did not address this in their classification and left Crocanthemum (excluding Hudsonia) as paraphyletic. Guzmán and Vargass (2009) molecular work also support a split of the old and new world taxa of Helianthemum sensu lato and again show Hudsonia nested within Crocanthemum. As a result, we tentatively support the segregation of new world taxa of Helianthemum to the genus Crocanthemum but expect further nomenclatural adjustments will need to occur once the Hudsonia-Crocanthemum clade is fully resolved. The four species of Crocanthemum that occur in New York are C. bicknellii, C. canadense, C. dumosum, and C. propinquum.