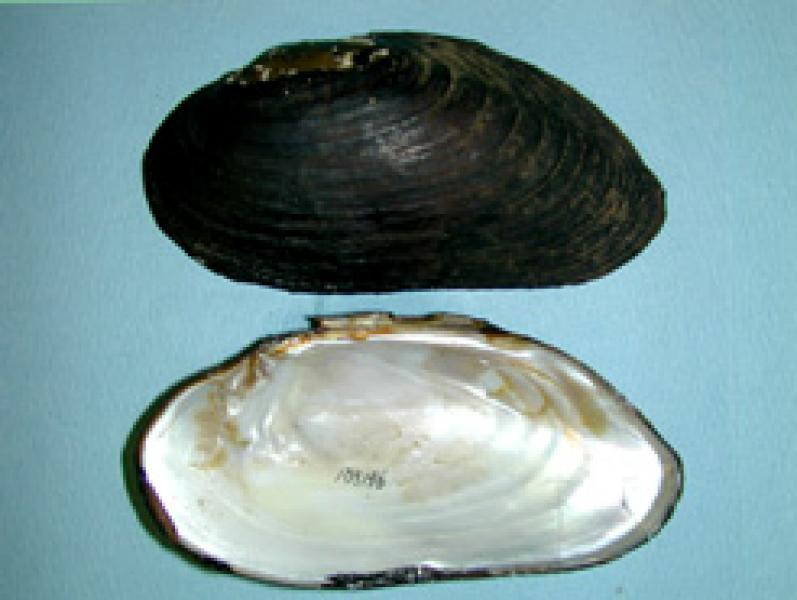 Margaritifera means "pearl-bearer." The city of Pearl River, NY was probably named for pearls taken from this species in nearby Muddy Brook (Strayer and Jirka 1997).

There are larger populations in the Salmon River, Grass River and its tributaries, and Fish Creek documented since in the late 1990s. Additional rivers in central NY and Saratoga county have smaller populations (New York Natural Heritage Program 2019). Other undiscovered populations may occur throughout eastern New York in nutrient poor, softwater trout streams (Strayer and Jirka 1997).

A population in a tributary of the Hudson River in southern New York illustrates the general decline of this species. It had been known to occupy the Hackensack River basin in Rockland County since the mid 1800s and appeared to be thriving as recently as the 1950s. However by the early 1990s only 3 individuals were found and it was soon expected to become extirpated from this locale, probably as a result of the intense urbanization of the watershed (Strayer 1994; Strayer and Jirka 1997).

The single most important cause of the decline of freshwater mussels during the last century is the destruction of their habitat by siltation, dredging, channelization, impoundments, and pollution. A healthy fish assemblage is critical to viable mussel populations and dams have resulted in heavy losses of mussels, mainly due to elimination of host fish species. Erosion due to deforestation, poor agricultural practices, and the destruction of riparian zones causes an increase in siltation and shifting substrates that can smother mussels. Domestic sewage, acid mine runoff, heavy metals, pesticides, and effluents from paper mills, tanneries, chemical industries and steel mills have all been implicated in the destruction of native mussel fauna. Since the Eastern Pearlshell inhabits coldwater trout streams, eutrophication has been a significant cause of its decline worldwide. In particular, mortality of adults increased with higher concentrations of nitrates in the water and lowered survival and poor establishment of juveniles was related to the amount of phosphates and calcium (Bauer 1988).

When feasible, the removal of impoundments in order to restore rivers to their natural flow would be beneficial since these structures negatively effect required fish host species as well as the mussels themselves. Since this species appears to be sensitive to eutrophication, actions which reduce run-off into high quality trout streams could be beneficial.

There is still much to learn about this species, especially determination of its distribution with respect to its Salmonid host fish species. Details about habitat requirements (current speed, water depth, substrate grain size, substrate stability, water temperature, and water quality factors) also need investigation. However, Strayer et al. (1994) found that the distribution of Unionoids was not related to these typical physical habitat qualities, but instead was related to long term stability of the substrate (i.e., flow refuges) and other large-scale habitat variables such as riparian zone vegetation (i.e., grassy vs. forested). Both large and small-scale forces promoting the patchy occurrence of Unionoid mussel beds is an active area of research (Strayer et al. 2004).

Generally this species lives buried in clean, mixed substrates in fast-flowing unpolluted trout streams and smaller rivers. Since Salmonids are the host species, it is confined to coldwater, nutrient-poor habitats, where it is often the only Unionoid species. Boulder-stabilized refugia containing enough sand for burrowing are ideal microhabitats for juveniles since they cannot tolerate silty conditions (Hastie et al. 2004).

New York forms the southwestern extent of this species' range. Within the state, its distribution is poorly known, but it seems rather widespread along the margins of the Adirondacks. At present, scattered populations are known from the Grass River and its tributaries, Fish Creek, the Boquet and Salmon Rivers south of Plattsburgh, a few rivers in central NY, the Upper Delaware River, and the Hackensack River (Strayer and Jirka 1997).

The Eastern Pearlshell has a Holarctic distribution, occurring in northern Europe, eastern North America, and Eurasia. In North America it is distributed from Newfoundland and Labrador south to Pennsylvania. It is also known from Idaho and Wyoming. The Eastern Pearlshell is widespread in New England and the Canadian Maritime Provinces (Clarke 1981). Strayer (1987) hypothesized that the distribution of this species may be explained by its movement between drainages, and even continents, by anadromous ocean-going Salmonids, although it not known whether glochidia could survive such conditions.

The Eastern Pearlshell has a thick subelliptical, elongate shell which is arched and is up to 150 mm long. The beak sculpture is coarse and concentric. The periostracum is dark brown to black, without rays. The pseudocardinals are strong, but laterals nearly to entirely absent. The nacre is pearly white, sometimes with pink to purplish coloration (Strayer and Jirka 1997).

The Eastern Pearlshell is the only member of the family Margaritiferidae in the state, and its biology and distribution are unique among Unionoids in New York.

The shell has a blackish, rayless periostracum and conspicuous pores on the shell interior (Strayer and Jirka 1997).

Adults of this species are sessile, with only limited movement in the substrate. Passive downstream movement may occur when they are displaced from the substrate during floods. More major dispersal occurs while glochidia are encysted on their Salmonid hosts. Being ectothermic, mussels presumably have reduced activity levels during colder months of the year. The Eastern pearlshell is thought to be the longest-lived invertebrate animal; the maximum lifespan was observed to be 132 years and the mean age of sexual maturity is 20 years (Bauer 1992). This species has a very high fecundity (upward of 17 million glochidia produced annually) and the smallest glochidia (Bauer 1987).

Little is known about the activity periods of Unionoid mussels but they are presumed to be greatly reduced during cold times of the year. Freshwater mussels are most often easiest to locate during late summer when water levels are lowest.

The time of year you would expect to find Eastern Pearlshell present and reproducing in New York.

Information for this guide was last updated on: May 21, 2019