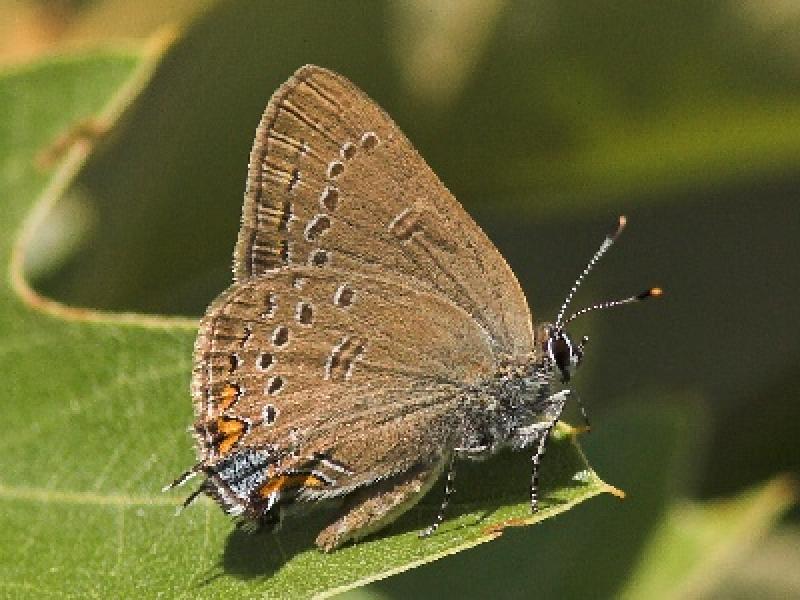 The larvae of Edwards' Haristreak and some related butterflies are defended by ants who eat sweet secretions from them. The ants that tend Edwards' Haristreak caterpillars make special shelters for them at the bases of the small oaks they ascend to feed on at night.

This is a very localized species, but apparently there are dozens of occurrences in southeastern New York. The species still occurs in the Albany Pine Bush and there have been isolated occurrences in Oneida, Steuben, and Delaware Counties. Some habitats are management dependent. The species at present is not imperiled, but does occur within a limited range and specialized habitat.

Short-term trends indicate a stable to declining (10% to 30%) population.

Long-term trends indicate a moderate to substantial decline (25% to 75%) of the population, due to the loss of historical pine barrens.

Loss of habitat and, potentially, gypsy moth (Lymantria dispar) spraying are threats. In some locations, habitat changes due to lack of fire is also a threat. Any factor that negatively impacts Formica ants could also threaten colonies of this butterfly.

In places where prescribed burning is used, refugia (unburned areas) are needed as it is unlikely that any life stage would survive a fire. If a few eggs did manage to survive a fire, they would almost certainly hatch before the scrub oaks resprouted and the larvae would starve. It is possible that the host ants (Formica ants) might have management needs, and these ants appear to be an important resource for the larvae. In some habitats, augmentation of nectar flowers might be beneficial. Gypsy moth (Lymantria dispar) spraying should not be done where this species occurs, unless it can be shown that the larvae are not highly sensitive to Bt (Bacillus thuringiensis) formulations. At least one other species of this genus appeared to be very sensitive in field studies (Wagner et al., 1996)

Associated ant species in all parts of the range need to be documented.

In New York and much of the range, this species occurs in sandy pine barrens, rocky ridges, outcrops, and occasionally other habitats in close association with substantial patches of scrub oak.

This species is found mostly in the acid hills, such as the Shawangunks in southeastern New York, north to Sullivan and Dutchess Counties, and in the Long lsland pine barrens. There is also a large, but isolated, population cluster in the Albany Pine Bush and old records exist from Steuben, Oneida, and Delaware Counties.

The species is found from southern Maine to extreme southern Manitoba, south along the coast to New Jersey and in the mountains to Georgia, and in the interior to northern Texas. It is absent from substantial parts of some states in this range, and it is generally local and rather rare south of Pennsylvania and the Great Lakes states.

Species in this genus are all variable and a few specimens are very difficult to identify. Note the combination of relatively pale brown color, somewhat like pale females of several related species, and the rounded well separated spots on the hindwing.

Misidentifications are a problem in this genus. All identifications should be verified by an expert and based on specimens or several good images preferably showing at least two individuals. Species in this genus are all variable and a few specimens are very difficult to identify. Note the combination of relatively pale brown color, somewhat like pale females of several related species, and the rounded well separated spots on the hindwing. The spots are much more fused on the Banded Hairstreak (Satyrium calanus). The Coral Hairstreak (Satyrium titus) has a similar color and pattern, but lacks tails. The Acadian Hairstreak (Satyrium acadicum) is paler and much grayer and found near willows. All four can occur together where prarie willows occur among the scrub oaks near Albany.

Adults, but larvae probably could be identified from Allen et al. (2005).

The adults are localized around scrub oaks or on nearby flowers.

The larvae feed on scrub oak spring growth. Other oaks are rarely or never used in New York.

The larvae occur in the spring, with most probably pupating in early June in normal seasons. The adults occur mostly from late June to mid-July, but with stragglers flying into August in cooler areas or delayed seasons. There is only one generation range-wide. The majority of the year is spent as eggs.

The time of year you would expect to find Edwards' Hairstreak active, reproducing, larvae present and active, eggs present outside adult, and pupae or prepupae present in New York. 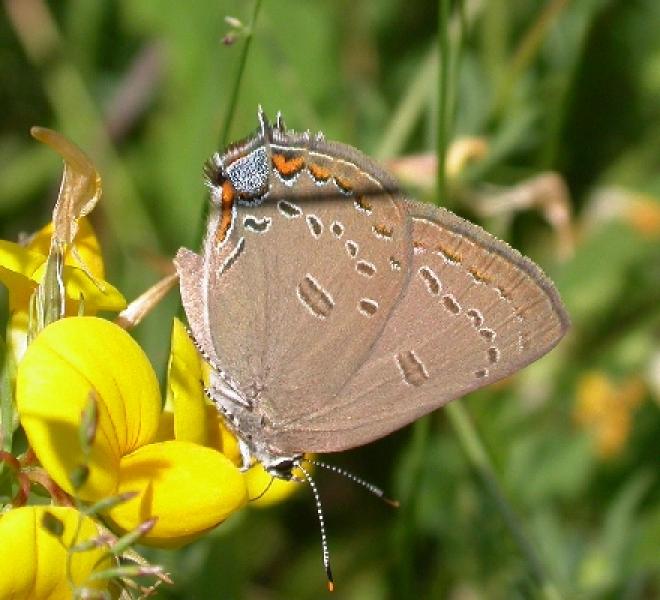