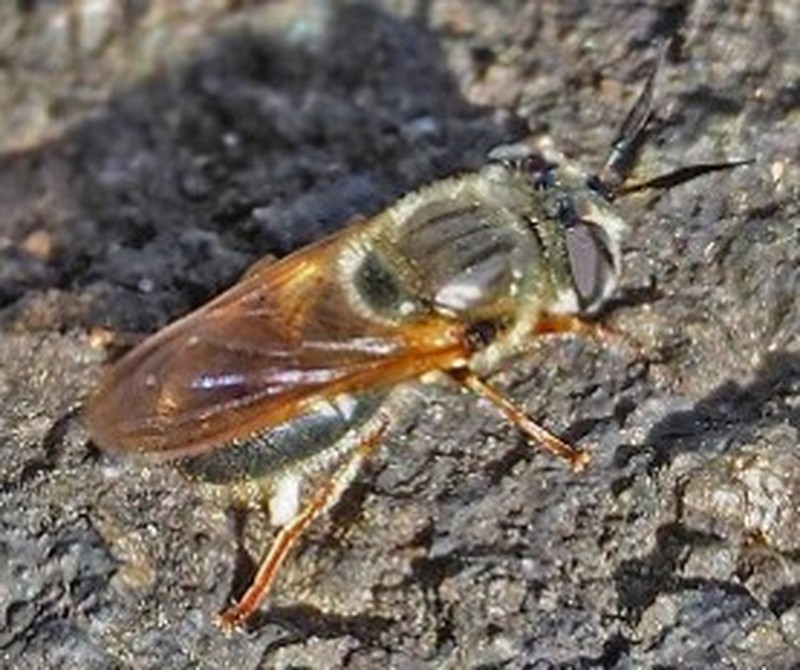 State Conservation Status Rank
SH
Historical (Possibly extirpated) in New York - Missing from New York; known only from historical records (more than 30 years ago), but still some possibility of rediscovery upon further searching.
Global Conservation Status Rank
G4G5
Apparently or Demonstrably Secure globally - Uncommon to common in the world, but not rare; usually widespread, but may be rare in some parts of its range; possibly some cause for long-term concern due to declines or other factors. More information is needed to assign either G4 or G5.

The Golden Pine Fly is rare throughout its range (Skevington et al. 2019) and in New York it is known only from two old records (Leonard 1928). It relies exclusively on old growth pine/oak forests in the southern portion of the state, a threatened and declining habitat. Targeted surveys, incluidng larval searches, in early spring would be needed to confirm that it is not still extant in New York.

There have been no searches for this species in many decades, and because of its secretive habits, it is not likely to turn up in broader insect surveys using generalized techniques such as sweep nets or Malaise traps.

The species has not been reported from New York since the 1920s. However, Rotheray and MacGowan (1990) found that Callicera larvae are much more common in Scotland than previously believed based on adult-only surveys. Thus, larval searches in suspected habitat would be needed to further confirm its absence.

Like all saproxylic (dead wood) insects, this Hover Fly is threatened by modern forestry and land management practices that remove trees from stands before they can reach old age and senescence. In part this is because Callicera larvae are long-lived and can take up to five years before they pupate, while successive generations of flies breed in the same rot holes which usually take more than 100 years to form (Zimina 1987, Rotheray and MacGowan 1990).

Virtually nothing is known of this iconic species throughout its entire range in the eastern U.S. Research into any aspect of its biology would be a valuable contribution.

These arboreal, canopy-dwelling flies are confined to old growth pine/oak forests with senescent trees where the larvae live in rotholes and water-filled cavities of old living conifers (often high up in the canopy). Puparia are found in fissures between plates of bark on the host trees.

It is known only from Tompkins County and Staten Island (Leonard 1928).

This rather large (1.0 cm) bee-like fly has yellowish-golden pile covering the body. It has a pilose face and the dark antennae are distinctively shaped and elongated. The overall color is brownish- black to steel blue; pile (fly hair) from pale yellowish white to brilliant golden. The face and cheek is shiny. The leg color ranges from partially dark to entirely pale. New York specimens are more likely to be pale pilose with dark legs (Thompson 1980).

The golden pile and uniquely shaped elongate, dark antennae are diagnostic for adults. The larva is also very distinctive having fused prolegs and lacking a long extendable breathing tube, despite being semi-aquatic.

Adults are easiest to identify, but larvae and puparia can be much easier to find than the elusive, secretive arboreal adults (Rotheray and Gilbert 2011).

Individuals can be found on hilltops. They often fly to dappled sunlight along water courses to drink.

Pollinating adults have been found feeding on nectar and pollen at cherry and willow flowers and buttercups (Rannunculus). The larvae are saprophagus filter-feeders within wet decaying heartwood in rot-holes. They are adapted for gathering and concentrating micro-organisms suspended in a fluid medium (Rotheray 1993; Skevington et al. in press).

This is an early spring species with recent records (IL, PA, NC) from late March to late April.

The time of year you would expect to find Golden Pine Fly reproducing and larvae present and active in New York.

Callicera are so unique that some taxonomists have treated the genus as the sole member of its own subfamily.

Krivosheina, M.G. 2002. To the biology of the flies of the genus Callicera with the description of the larvae of C. ziminae. International Journal of Dipterological Research 13:3-8.

Thompson, F.C. 1980. The North American species of Callicera. Proceedings of the Entomological Society of Washington 82:195-211.

Information for this guide was last updated on: January 17, 2019