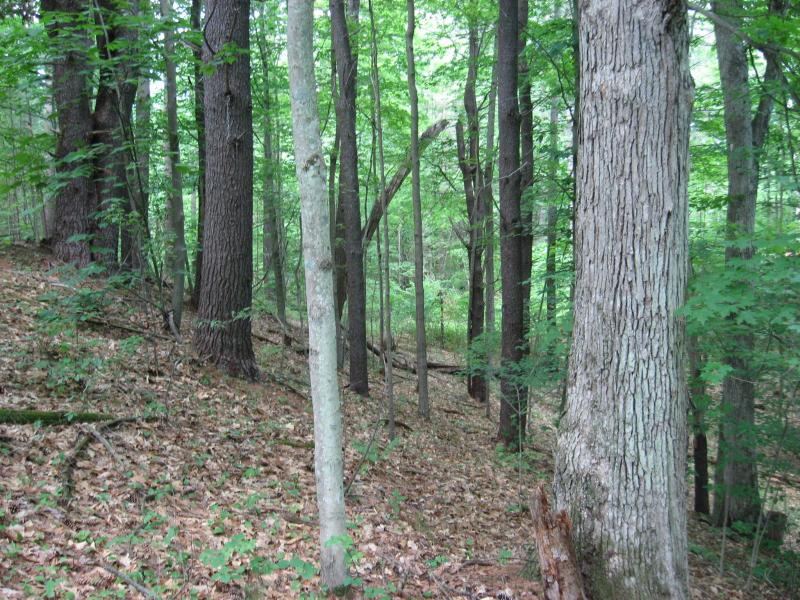 The American chestnut (Castanea dentata) was a common component in Appalachian oak-pine forests prior to the chestnut blight in the early 1900s. An introduced Asian fungus, called Cryphonectria parasitica, commonly referred to as the chestnut blight, girdled and killed chestnuts. By 1950, the once common chestnut was reduced to decomposing trunks and stumps, some of which can still be found in Appalachian oak-pine forests today. Chestnut oak, sugar maple, and red oak replaced the American chestnut after this devastating fungus.

There are several hundred to a couple thousand occurrences statewide. A few documented occurrences have good viability and several are protected on public land or private conservation land. This community has a limited statewide distribution and includes a few large, high quality examples. The current trend of this community is probably stable for occurrences on public land, or declining slightly elsewhere due to moderate threats related to development pressure.

The number and acreage of Appalachian oak-pine forests in New York have probably declined moderately in recent decades as a result of logging, agriculture, and other development.

The number and acreage of Appalachian oak-pine forests in New York have probably declined substantially from historical numbers likely correlated with past logging, agiculture, and other development.

Threats to forests in general include changes in land use (e.g., clearing for development), forest fragmentation (e.g., roads), and invasive species (e.g., insects, diseases, and plants). Other threats may include over-browsing by deer, fire suppression, and air pollution (e.g., ozone and acidic deposition). When occurring in expansive forests, the largest threat to the integrity of Appalachian oak-pine forests are activities that fragment the forest into smaller pieces. These activities, such as road building and other development, restrict the movement of species and seeds throughout the entire forest, an effect that often results in loss of those species that require larger blocks of habitat (e.g., black bear, bobcat, certain bird species). Additionally, fragmented forests provide decreased benefits to neighboring societies from services these societies often substantially depend on (e.g., clean water, mitigation of floods and droughts, pollination in agricultural fields, and pest control) (Daily et al. 1997). Southern pine beetle (Dendroctonus frontalis) is a bark beetle that infests pine trees, such as pitch pine, white pine, and red pine. Southern pine beetle is native to the southeastern United States, but its range has spread up the east coast to Long Island, New York in 2014. Natural communities dominated or co-dominated by pines would likely be most impacted by southern pine beetle invasion.

Management should focus on activities that help maintain regeneration of the species associated with this community. Deer have been shown to have negative effects on forest understories (Miller et al. 1992, Augustine and French 1998, Knight 2003) and management efforts should strive to ensure that regenerating trees and shrubs are not so heavily browsed that they cannot replace overstory trees. Avoid cutting old-growth examples and encourage selective logging areas that are under active forestry.

Inventory any remaining large or old-growth examples across the state. Continue searching for large sites in excellent to good condition (A- to AB-ranked).

The range of Appalachian oak-pine forest probably spans most of the northern and central Appalachian Mountains, concentrated at the northern end of this range. This range is estimated to span northeast to upstate New York and southern Maine, west to Ohio and Kentucky, southwest to northern Georgia, and southeast to New Jersey.

Appalachian oak-pine forests occur on sandy or rocky soils, on slopes, ravines, or in pine barrens. The canopy is dominated by any of several oak species (Quercus alba, Q. coccinea, Q. rubra, and Q. velutina), with white pine (Pinus strobus) making up at least 25% of the total cover. On rocky slopes, the canopy abundance of pitch pine (Pinus rigida) could be greater than that of white pine at some sites. The shrub layer is dominated by ericaceous shrubs such as lowbush blueberry (Vaccinium angustifolium, V. pallidum) and huckleberry (Gaylussacia baccata). The herbaceous layer is usually sparse and low in species diversity.

A closed-canopy mature mixed species forest with white pine making up at least 25% of the canopy cover. The understory has a well-developed shrub layer made up of ericaceous species, and an herbaceous layer that is typically sparse.

Known examples of this community have been found at elevations between 240 feet and 2,700 feet.

During July, two species of lowbush blueberry in the understory of this community bear fruit. In autumn, the foliage of the hardwood canopy species and the understory shrubs turn bright colors and provide an attractive contrast to the dark green of the white pines present. 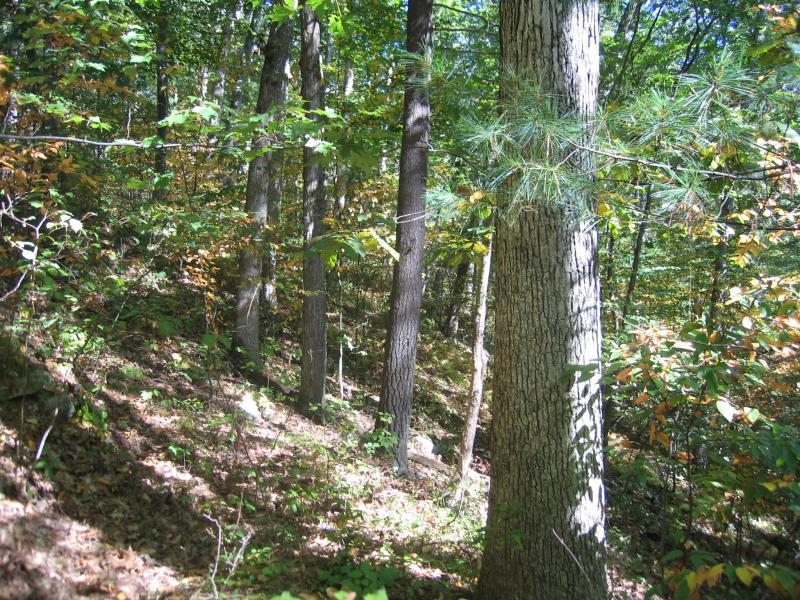 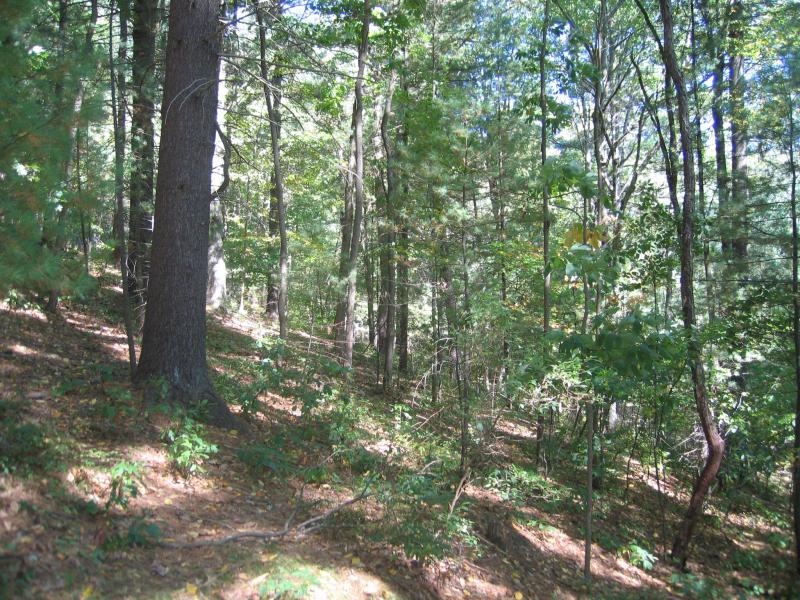 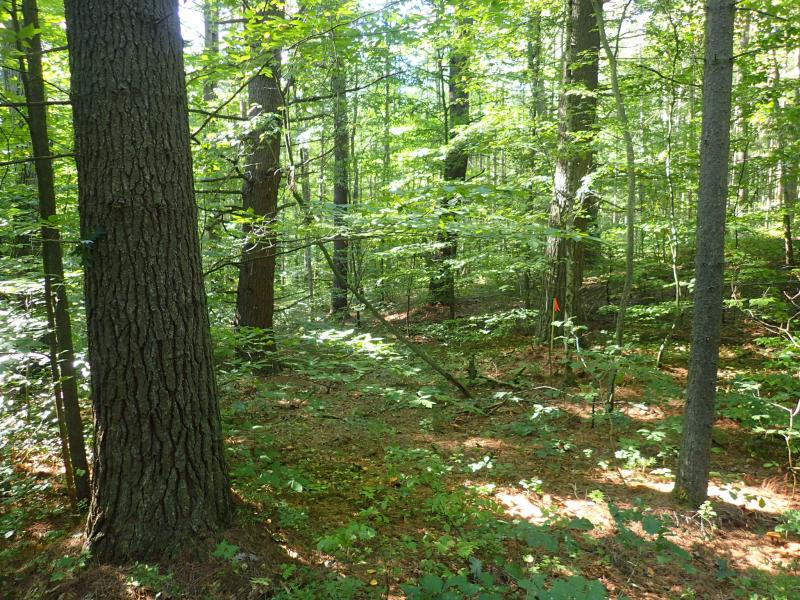 This figure helps visualize the structure and "look" or "feel" of a typical Appalachian Oak-Pine Forest. Each bar represents the amount of "coverage" for all the species growing at that height. Because layers overlap (shrubs may grow under trees, for example), the shaded regions can add up to more than 100%.