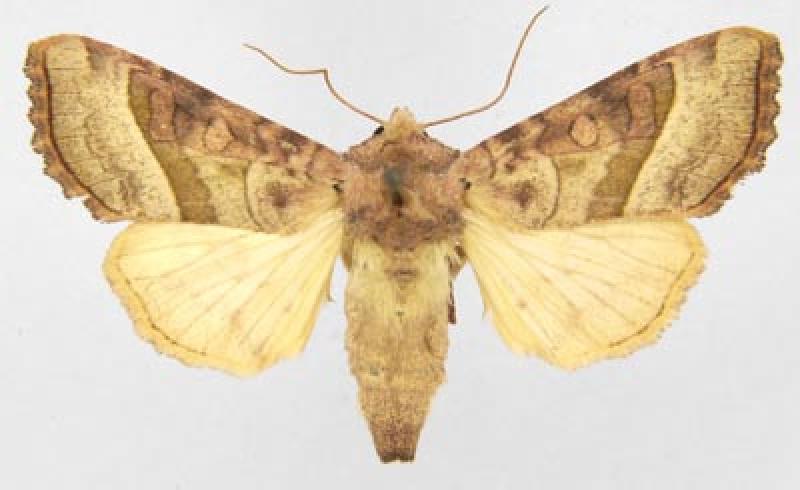 This species does not cause harm to any crop but is closely related to the potato stem borer (Hydraecia micacea) and hop vine borer (H. immanis), the larvae of which are agricultural pests (Rings and Metzler 1982; Covell 1984).

Forbes (1954) reported that this moth was "not common", and currently the species is known from only one location on Long Island. However, targeted surveys for the species have not been conducted, and the food source for the larvae, figwort (Scrophularia spp.), is widespread. There are a few historical records of the species from central and western New York. Additional surveys are needed to determine if it is still present at these and other locations.

The short-term trend for this species in New York State is unknown. Only one individual was documented on one occasion on Long Island during a field survey conducted in 1995.

The long-term trend for this species is unknown. Forbes (1954) reported that the moth was "not common". There are a few historical records of the species from central and western New York. Additional surveys are needed to determine if it is still present at these and other locations.

The life history of this species should be considered when timing prescribed burns to restore grassland habitat in occupied areas. This species overwinters as eggs that are vulnerable to fires, and therefore winter fires may be a threat. However, older larvae of this borer species might be below ground during naturally timed fires. Burned patches may provide very good habitat a year after a burn and until the next burn if unburned areas are left adjacent to the burned area to provide refugia.

This moth is found in areas that contain the food source for the larvae, figwort (Scrophularia spp.). In New York State, it is known to inhabit a maritime grassland.

Currently, the only known occupied site is on Long Island. Historically, the moth was also reported from Ithaca and Sardinia in central and western New York.

Distribution data for United States and Canadian provinces is known to be incomplete or has not been reviewed for this species. The species is known to occur in eastern North America in Ohio (Rings and Metzler 1982), Iowa (Opler et al. 2010), New Jersey, New York, Pennsylvania, Virginia, Wisconsin, and Ontario (NatureServe 2010).

This moth has one annual generation. It overwinters as eggs. Moths in this species group (Apameines) usually lay their eggs in rows on aging or dead plants that are the food source for the larvae. The eggs are covered with a secretion and fastened within leaf cases or gaps in dried plant material (Wagner et al. 2008).

The food source for the larvae is figwort (Scrophularia spp.).

The best time to see this species is during its flight season, in late August and September.

The time of year you would expect to find Hairy Hydraecia present and reproducing in New York.