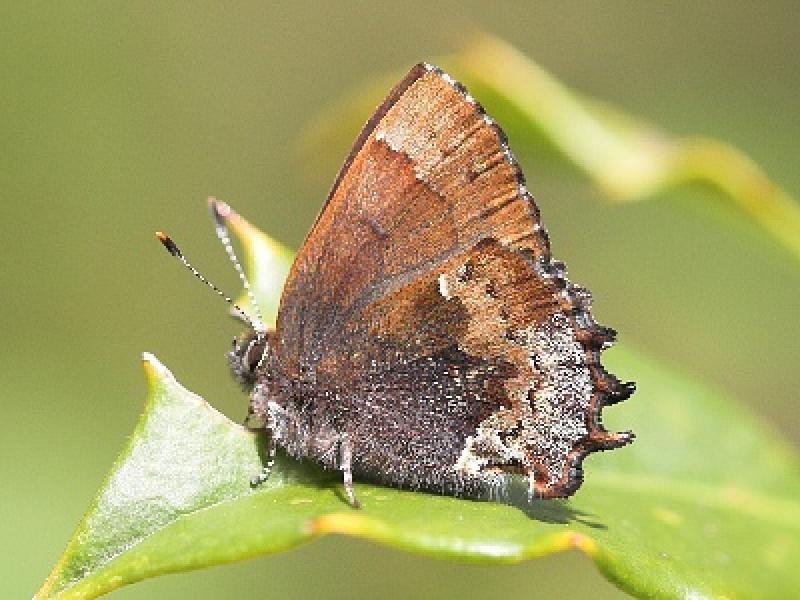 The foodplant of the Henry's elfin is unknown in New York. Blueberry species have been reported, but not officially documented. Hollies and invasive buckthorn are other possibilities.

The status of this species is poorly known in New York. There is a population in the Albany Pine Bush with the most recent observation in 2012. This species cannot adequately be inventoried until the specific habitat requirements are identified for New York and it is possible that populations may be found in northern New York and on Long Island in the future.

Beside habitat loss, spongy moth (Lymantria dispar) spraying is a potential threat, but the severity cannot be assessed. Prescribed burning is also a potential threat because the foodplant is unknown, which makes it impossible to design prescribed burns appropriately for this species, leaving survival in locations such as the Albany Pine Bush largely to chance. Survival of pupae in the leaf litter during fire is unlikely. It is also possible that lack of fire could threaten the habitat. Mosquito and blackfly spraying in wetlands could threaten bog or swamp populations of this species.

The management needs are unknown at this time since the foodplant is unknown and the habitat requirements are unclear in New York. It is known that the pupae reside in the leaf litter and are vulnerable to fires.

The primary research need is to learn the foodplants and habitats in New York in order to effectively inventory this species. Also if new populations are found they should be vouchered with a few actual specimens given the possibility of taxonomic issues, and likely foodplants noted.

The habitat is essentially unknown in New York, especially for older records or where just a single individual has been observed or collected. Any observation that does not include several adults may not be reflective of the true habitat. Notably some of the Albany Pine Bush records, possibly all, are single individuals. In neighboring states, this species inhabits forests, but the exact habitat depends on the foodplant which varies regionally. Tall shrub areas around bogs, or shrub swamps with mountain holly (Nemopanthus mucronatus) are potential habitat.

The range in New York is not well understood. Henry's elfin has been found mainly in the Albany area, but there are a few other records from Tompkins to Westchester counties. Glassberg (1993) indicates there are no recent records from the New York City area. With the habitat unknown and elfin collectors concentrating on the wrong habitats in the past, this butterfly could be widely overlooked. Considering that Henry's elfin is widespread in other regions occurring with evergreen hollies from Sandy Hook, New Jersey south into Florida, it is expected to to occur with American holly (Ilex opaca) on Long Island. Similarly the species occurs widely in the St. Lawrence region of Canada and should turn up in northern New York. Henry's Elfin will probably eventually become more widespread in New York, as it has in both Massachusetts and Ontario as Buckthorn (Rhamnus spp.) feeding strains spread.

The primary range is coastal New England to Florida west to southern Iowa, much of Texas, and barely into New Mexico. Populations also occur in the Great Lakes region, the Albany Pine Bush in New York, and in southern Canada, but the species seems to be absent from most parts of New England, New York, and Pennsylvania, and in much of the Midwest.

This is a brownish tailed elfin that often perches on shrubs or even small trees, often in forests or tall shrub areas. In much of its range it tends not to occur in habitats frequented by other eflins.

Henry's elfin is a small, brown, tailed butterfly with a wing span of approximately 1 to 1.25 inches (2.5 to 3.2 cm). The upperside is dark brown. The front edge is often a dull orange tinge at the outer margin of the forewing and near the tail of the hindwing. The underside of the forewing has a somewhat straight postmedian line with some white. The outer half of the underside of the hindwing can have a colorful mix of reddish-brown, yellowish-brown, and gray patches. Larva is light green with a lighter green doral line and oblique lateral stripes. The color changes abruptly to reddish-brown a few days before pupating.

In the field, habitat will be a strong clue for identification, since the only other tailed elfin (frosted elfin - Callophrys irus) is closely associated with lupine (Lupinus perennis) and Indigo (Baptisia sp.). The Henry's Elfin is also much browner and much more likely to be perched in shrubs or trees. It has some gray beneath, but not nearly as much as frosted elfins do. Other useful characters include lack of a dark spot near the tail and more white along the separation of the paler and darker portions of the hindwing. All other elfins in New York lack the tails on the hindwing.

The adults are most easily identified, but larvae can also be identified. The foodplant is often a strong clue as to the identity.

The adults tend to perch one to several meters high on evergreen or recently expanded foliage.

The larval foodplant in New York is not known. Blueberry is often reported but has never been documented. Species in the holly family would be the most likely native foodplants, but introduced buckthorns will probably eventually become the main foodplants.

There is only one brood range wide. The flight season is poorly documented in New York, but is presumably most of May with a few stragglers into June, and probably starts at the end of April in some years southward. The larvae mature within a month, unless it is still cold.

The time of year you would expect to find Henry's Elfin reproducing, larvae present and active, and pupae or prepupae present in New York. 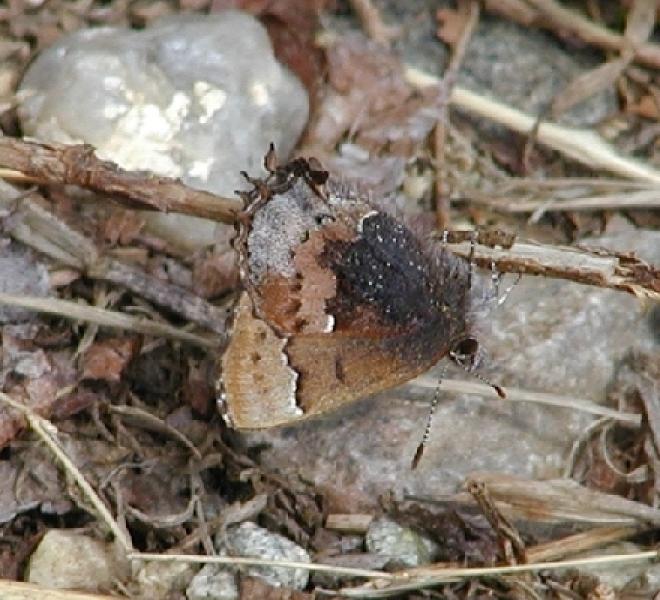