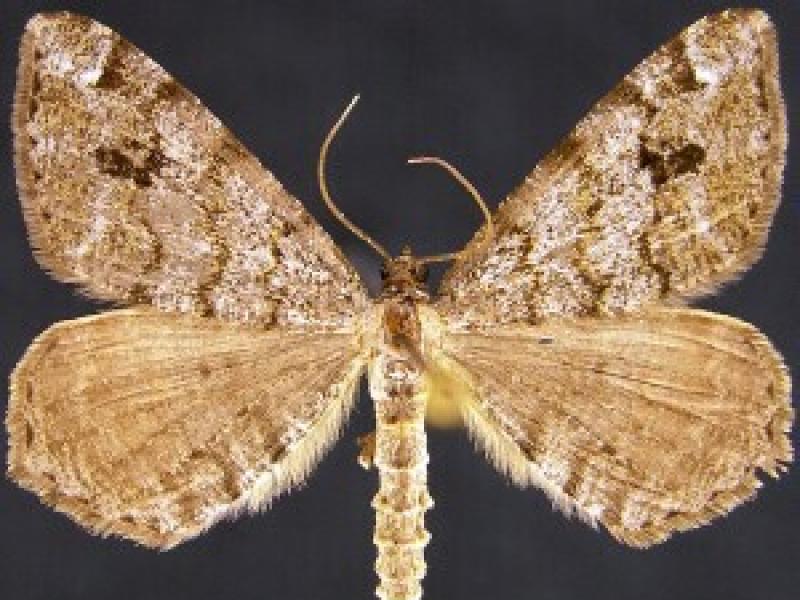 Macaria signaria has a very limited range in New York. It is associated with jack pine and occurs at only two known locations in the state.

There are only two known occurrences of Macaria signaria in the state. This species likely has a very limited distribution considering that it's food plant, jack pine (Pinus banksiana), is uncommon in New York.

The long-term trends are unknown. The both known statewide locations were first documented in 1995.

The loss of jack pine dominance in occupied sites due to wildlife suppression, logging, or mineral excavation are potential threats. While the loss of jack pines due to fire suppression is a potential threat, a large fire could also destroy the only known occurrences in the state. The spraying of biological control agents or pesticides for spongy moths is another potential threat. While spongy moths inhabit deciduous forest and this species inhabits jack pine barrens the two known occurrences are adjacent to mixed and deciduous forest. It is unknown if the use of Bt (Bacillus thuringiensis - a bacterial biological control agent designed to kill spongy moth caterpillars) would kill Macaria signaria caterpillars. McCabe (2004) documented the defoliation of jack pines brought to Albany, NY to raise Zale duplicata larvae by pine sawflies, and noted the possibility that this fly may limit jack pine occurrence in the state to locations on sandstone or flat rock areas where soil is too sparse for the development of pine sawfly larvae.

Since Macaria signaria depends on jack pine, which is a fire adapted species, appropriate fire management may be needed to maintain the jack pine component of the two known statewide occurrences. Because jack pine cones are located and held at the top of the tree, high intensity crown fires are necessary for the cones to open and germinate in large numbers. Some cones on each tree may not be encased in as thick a resin and may open without fire and some populations of jack pine may be more prone to this condition and may, therefore, not be as fire dependent. There is concern that the barrens where the two Macaria signaria occurrences are located are reaching maturity and may be replaced by other species if fire is excluded from the system (Hawver 1993). However, any prescibed burning program should take into account rare lepidoptera species which could be negatively affected by loss of eggs, pupae, larvae, or adults depending on the size and timing of the burned area. Any burning should leave refugia or large areas of unburned habitat and the entire occurrence should not be burned in the same year. More research is needed into the biology of Macaria signaria and several other highly habitat-specific rare lepidoptera species that inhabit theses barrens before any intensive management strategy is determined (McCabe 2004).

The caterpillars are dependent on their food plant, jack pine (Pinus banksiana), which has a very limited distribution in the state. Adults have been captured in two jack pine dominant sandstone pavement barrens in New York. Both sites have thin soils, exposed bedrock, an ericaceous shrub layer, and small boggy wetlands scattered throughout.

Macaria signaria is known from only two locations in the state in Clinton County. Although intensive inventory efforts to document new locations are lacking, its range is probably very limited in New York considering there are only two known occurrences and because the food plant, jack pine, is uncommon in the state. Jack pine primarily occurs in sandstone barrens in Clinton County and is restricted to northern New York as a native tree (New York Flora Atlas 2009).

The global distribution may not be fully known. There are known occurrences in New York and in Maine.

The caterpillar is green with yellow stripes and a reddish brown head. It can reach 22 mm in length (Maier et al. 2003). The moth is similar to other moths in the Macaria genus. It is a small cream-colored moth with dark speckles which are more abundant on the forewings and form wavy parallel lines.

This species is likely to be difficult to identify by someone not experienced with the Macaria genus. The moth is small and cream-colored with dark speckles which are more abundant on the forewings and form wavy parallel lines. The caterpillar has a green body and a reddish-brown head marked with a dark herringbone pattern (Maier et al. 2003). It may grow to 22 mm in length. Identifying characteristics of the caterpillar include pale subdorsal and spiracular stripes; wide yellow spiracular (side) stripe; yellow patch behind stemmata (extension of spiracular stripe); purplish brown thoracic legs and green prolegs usually with purple shading near the base; dark green middorsal stripe; yellowish white subdorsal stripe with one or two wavy, purplish or dark green longitudinal lines immediately below, especially on anterior body segments. There is also a purplish form of the caterpillar which may result from crowding during rearing (Maier et al. 2003).

A greenish Macaria caterpillar found on jack pine may be distinguished as M. marmorata by the yellow spiracular stripe on its side which is wider than other similarly occurring species in this genus.

Adult moths and caterpillars may be idenitified by someone familiar with this genus.

Macaria marmorata moths are nocturnal and may be captured with black lights.

In Maine, there is one generation. The mature caterpillars are present in August and September and the pupa overwinter in the soil and debris (Maier et al. 2003). These dates are not certain but may be similar in New York. Adult moths have been captured in New York in June and July. The emergence date of the adults in the spring is not known so uncertainty between the pupa and adult stage is displayed as present in the phenology table.

The time of year you would expect to find Jack Pine Looper present, active, larvae present and active, and pupae or prepupae present in New York.

The natureserve website lists this species as Macaria banksianae. Douglas Ferguson worte a monograph before his death on Geometridae that was recently published. This species should belong to the genus Macaria and banksianae was first proposed as the new species name by Ferguson, however, he later determined there wasn't a new species so the name Macaria marmorata stands. NY moth expert Tim McCabe brought the taxonomic name changes to my attention. He verified the name after receiving Fergusons monograph on Geometridae.