You may not find this species in some plant books because it is often lumped under other species, usually Juncus marginatus. In New York it is recognized as a separate species based upon work done by W.N. Knapp on the status of Juncus longii (Weldy, Troy and David Werier 2010).

There are three existing populations but no detailed surveys have been done to determine population size and quality. There are 15 historical records from the early 1900s through 1963 that need to be resurveyed.

Short-term trends are unknown because existing populations have only been surveyed once.

Populations have probably declined somewhat over the last 100 years but more surveys are needed of older records to determine long-term trends.

One population is threatened by trampling, off-road vehicles, and the displacement by exotic species.

The small natural areas where these plants occur need to be maintained in a natural condition by preventing woody succession and direct disturbance by people from surrounding residential areas. The presence of exotic species, especially Phragmites, needs to be monitored and removed when they appear.

More research is needed to determine specific habitat preferences in order to narrow down areas to survey.

In New York this species has been seen on a damp, mowed roadside, a coastal plain pondshore and a natural wet opening in successional pitch pine barrens surrounded by development (New York Natural Heritage Program 2012). Moist or wet meadows and shores (Gleason and Cronquist 1991).

This occurs only in eastern Suffolk County on Long Island.

This is primarily a species of the midwestern, south-central and southeastern US where it only reaches extreme northern Florida. Its northeastern range limit includes Pennsylvania, New York and Massachusetts where it is rare.

This rush grows up to 2-5 dm tall, in clumps from a coarse thick rhizome. The principal leaves are flat, 1-3 mm wide, with 3 prominent veins, lacking septa, and with rounded articles at the base of the blades. The terminal inflorescence has 20-200 flower clusters with 2-5 flowers per cluster. The outer tepals are lanceolate, 2.1-3.1 millimeters long and long-pointed. The inner tepals are 2.0-3.3 millimeters long, usually with a rounded tip although sometimes they are more pointed. There are 3 stamens that are tipically longer than the outer tepals. The ovoid to rounded capsule is longer than the tepals and brown with red speckles. The apex is blunt or rounded. The seeds are tapered at both ends, light brown, 0.5-0.7 mm long with small points at each tip. They are covered with transverse chambered lines.

The best time to identify this species is when it is in fruit.

The more common and widespread Juncus marginatus is closely related but it only has 5-15 flower clusters per inflorescence and with 6-20 flowers each. The rhizomes are thin and not coarse and not very conspicuous. The stamens are usually shorter than the outer tepals. These two species are the only Juncus species in New York with flat leaves and flowers in clusters.

Fruits are visible from July to early November.

The time of year you would expect to find Large Grass-leaved Rush fruiting in New York. 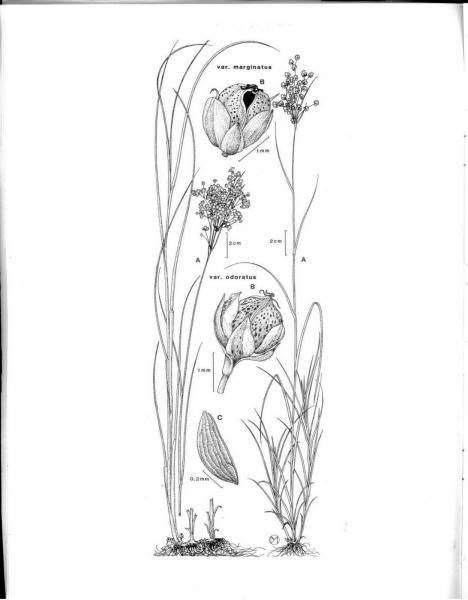