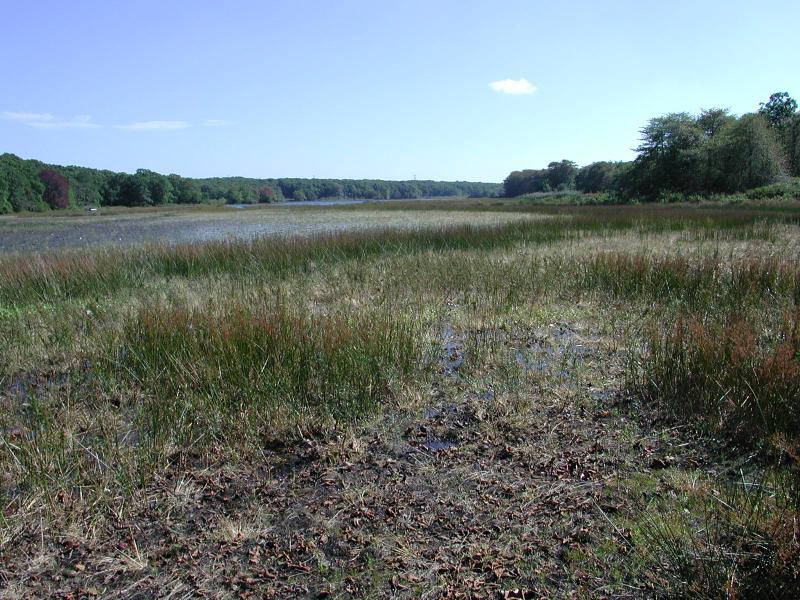 The first thing you might notice about a coastal plain pond is that there is no stream flowing in and none flowing out. Water levels of the pond, and therefore the size of the exposed pond shore, are due only to changes in an underground aquifer. During the wetter parts of the year this aquifer is high and water levels in the pond are high which translates into a very narrow pond shore. Conversely, during the dry months (late summer) the aquifer is low so water levels are low but there is a large expanse of pond shore. Every 5 years or so there is an exceptionally dry year with a lot of pond shore exposed. Plants that may not have been seen for a decade will now germinate and grow (Edinger et al 2002, Swain and Keasley 2001).

The numbers and acreage of coastal plain pond shores in New York have declined in recent years. There are less than 400 acres currently mapped with probably less than 1000 acres extant. The total, historical, acreage is unknown but was probably less than 2000 acres. The decline is due primarily to development and the increasing demand for freshwater.

The numbers and acreage of coastal plain pond shores have declined from historical numbers primarily due to settlement of the area and the corresponding agricultural, residential, and commercial development causing both a displacement of this community and a lowering of the water table due to an increased demand for freshwater.

Invasive species are the primary threat to coastal plain pond shores. Phragmites australis has invaded over half of the documented occurrences (per NY iMapInvasives 2018). Coastal plain pond shores are threatened by development and its associated run-off (e.g., residential, roads), recreational overuse (e.g., ATVs, hiking trails causing erosion and compaction), and habitat alteration in the adjacent landscape (e.g., logging, pollution, nutrient loading). Alteration to the natural hydrology is also a threat to this community (e.g., excessivive long-term drawdown and/or flooding, draining, or dredging). Some coastal plain pond shores are too small to be protected by the New York State freshwater wetland regulations. In 2001, the federal Supreme Court ruled that the US Congress did not give authority to the US Army Corps of Engineers (US ACE) under section 404 of the Clean Water Act to regulate the filling of isolated wetlands.

Where practical, establish and maintain a natural wetland buffer to reduce storm-water, pollution, and nutrient run-off, while simultaneously capturing sediments before they reach the wetland. Buffer width should take into account the erodibility of the surrounding soils, slope steepness, and current land use. Wetlands protected under Article 24 are known as New York State "regulated" wetlands. The regulated area includes the wetlands themselves, as well as a protective buffer or "adjacent area" extending 100 feet landward of the wetland boundary (NYS DEC 1995). If possible, minimize the number and size of impervious surfaces in the surrounding landscape. Avoid habitat alteration within the wetland and surrounding landscape. For example, roads and trails should be routed around wetlands, and ideally not pass through the buffer area. If the wetland must be crossed, then bridges and boardwalks are preferred over filling. Restore past impacts, such as removing obsolete impoundments and ditches in order to restore the natural hydrology. Prevent the spread of invasive species into the wetland through appropriate direct management, and by minimizing potential dispersal corridors, such as roads.

When considering road construction and other development activities, minimize actions that will change what the water carries and how water travels to this community, both on the surface and underground. Water traveling over-the-ground as run-off usually carries an abundance of silt, clay, and other particulates during (and often after) a construction project. While still suspended in the water, these particulates make it difficult for aquatic animals to find food; after settling to the bottom of the wetland, these particulates bury small plants and animals and alter the natural functions of the community in many other ways. Thus, road construction and development activities near this community type should strive to minimize particulate-laden run-off into this community. Water traveling on the ground or seeping through the ground also carries dissolved minerals and chemicals. Road salt, for example, is becoming an increasing problem both to natural communities and as a contaminant in household wells. Fertilizers, detergents, and other chemicals that increase the nutrient levels in wetlands cause algae blooms and eventually create an oxygen-depleted environment where few animals can live. Herbicides and pesticides often travel far from where they are applied and have lasting effects on the quality of the natural community. So, road construction and other development activities should strive to consider: 1. how water moves through the ground, 2. the types of dissolved substances these development activities may release, and 3. how to minimize the potential for these dissolved substances to reach this natural community.

This natural community has been well searched for in New York but composition and dynamics are just beginning to be documented and will need addtional work.

This oligotrophic (nutrient poor) coastal plain pondshore community occurs on the shores of ponds formed in glacial outwash plains. They can be found from Ontario and Nova Scotia south to Long Island, New York, and to the coastal plain of New Jersey. The substrate is generally sand or gravelly sand with a shallow or negligible organic layer.

Coastal plain pond shores are found exclusively in the coastal plain of Long Island in New York state. The community occupies the gentle slopes of ponds formed in the glacial till. When water levels are low, distinctive zones or rings of herbaceous vegetation form around the pond.

Known examples of this community have been found at elevations between 10 feet and 60 feet.

The best time to visit this community is probably during the late summer when the water levels are lowest and the exposed pond shore is largest. Zones of plants from the waters edge to the tree line will be evident along with the greatest number of growing plant species. 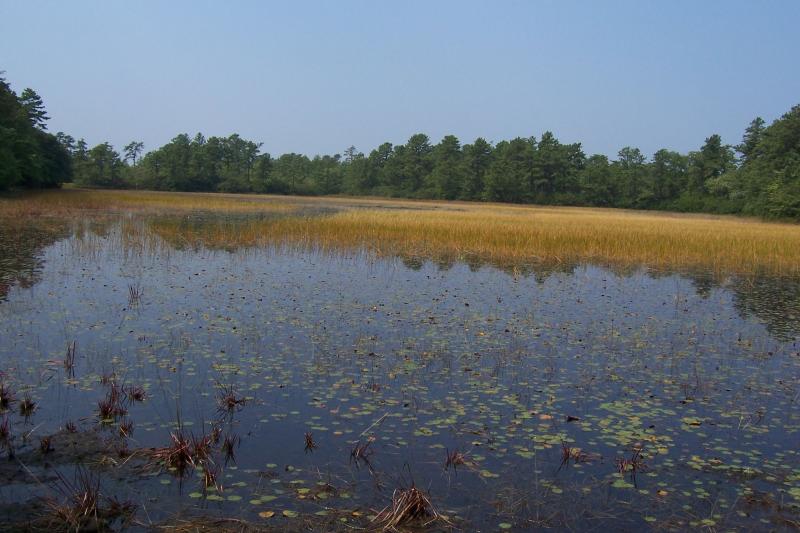 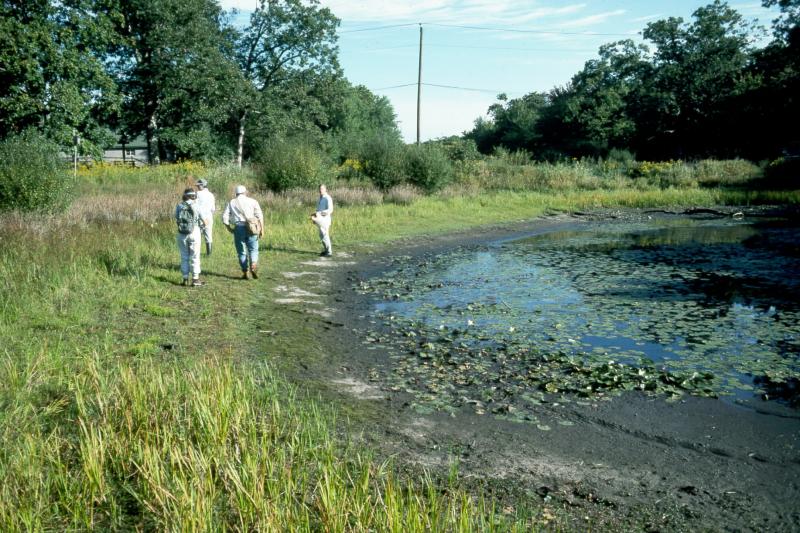 This figure helps visualize the structure and "look" or "feel" of a typical Coastal Plain Pond Shore. Each bar represents the amount of "coverage" for all the species growing at that height. Because layers overlap (shrubs may grow under trees, for example), the shaded regions can add up to more than 100%.

Lundgren, J. A. 1987. The distribution and occurrence of the vegetation of a coastal plain pond shore in Plymouth, MA from 1986 to 1987. Unpubl. report submitted to Massachusetts Natural Heritage Program. Boston, MA 11 pp. Draft.

McAvoy, W., and K. Clancy. 1994. Community classification and mapping criteria for Category I interdunal swales and coastal plain pond wetlands in Delaware. Final Report submitted to the Division of Water Resources in the Department of Natural Resources and Environmental Control. 47 pp.

Schneider, R. 1992. Examination of the role of hydrology and geochemistry in maintaining rare plant communites of coastal plain ponds. report to the Nature Conservancy. DC.

Sneddon, L. A., and M. G. Anderson. 1994. A classification scheme for Coastal Plain pondshore and related vegetation from Maine to Virginia. Supplement to Bulletin of the Ecological Society of America 77 (Abstract).

Theall, O. 1983. An investigation into the hydrology of massachusetts' coastal plain ponds. unpublished report for Massachusetts Division of Fisheries and Wildlife.

Theall, Otto. 1983. An investigation into the hydrology of Massachusetts' coastal plain pond. Unpublished study by Massachusetts Natural Heritage and Program, Massachusetts Division of Fisheries and Wildlife.