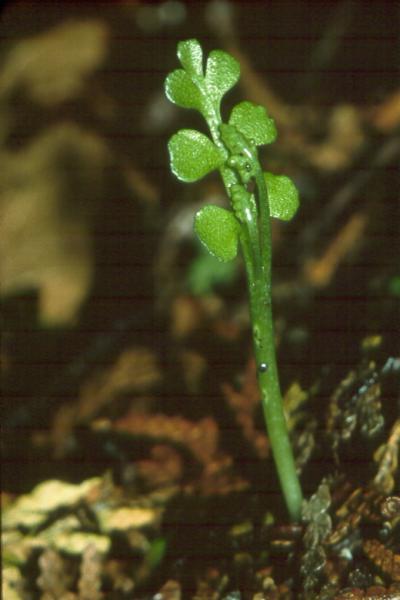 The underground gametophyte (the separate plant that germinates from the spore and produces the egg and sperm cells) does not produce chlorophyll and is dependent on a fungus for its nutrition. Plants may live underground for more than one year and all of the plants in one population may not be seen every year. This fern was recognized as a separate species in 1927 and was named for Mingan Island in the northern Gulf of St. Lawrence.

There is only one known location for this fern in the state. No other historical populations were recorded.

The only existing population has seen a reduction in numbers but the severity is complicated by the difficulty in counting individuals without harming them and the added difficulty of distinguishing them from the closely related Botrychium lunaria. All the plants may not appear each year so long-term counts must be done to verify trends.

Only one location was ever known for this fern in the state.

The primary threat to Botrychium minganense is the loss of its open habitats to successional overgrowth and development. Trampling by visitors to the only known site is also a threat since the plants are small and easily overlooked.

An evaluation of the management needs of the existing population should be undertaken.

A long-term demographic study should be undertaken to understand the biology and trends of this plant in New York.

This is a fern of northern white cedar forests and open pastures that are casually grazed where the underlying bedrock is calcareous. Often found with other moonworts (New York Natural Heritage Program 2005). Open fields and meadows, or sandy or gravelly streambanks (Gleason and Cronquist 1991). In dry pastures, meadows, and on hillsides and rocky ledges (Cobb 1984). Open turfy, gravelly or ledgy slopes, shores and meadows, chiefly calcareous (Fernald 1970).

This fern is only known from Onondaga County.

One of the most widespread moonworts in North America, occurring in practically all parts of Canada and Alaska and throughout the western United States, south to Arizona, and in all the US/Canadian border states.

Mingan moonwort is a very small perennial fern with a single aboveground frond. The frond may reach about 8 inches tall but is usually smaller and can be seen until middle or late summer. It is divided into two leaves above a common stalk. The sterile leaf is usually a deep, dull green and somewhat fleshy. It has up to 10 usually well separated pairs of leaflets (pinnae). The pinnae are variable but generally narrowly fan-shaped. The top edges are rounded and smooth but they can be broader and may be lobed or have cut edges. The fertile leaf is longer than the sterile leaf with branches that bear grape-like sporangia. Spores germinate underground and develop into tiny, non-photosynthetic gametophytes which depend on an fungus for nourishment.

This fern is best identified when the leaves are fully formed.

Botrychium minganense is most easily confused with Botrychium lunaria, Botrychium campestre, and Botrychium simplex. The pinnae of Botrychium lunaria are broader, more fan shaped and overlap. Botrychium campestre has a shorter and more branched fertile leaf and the pinnae of the sterile leaf are often deeply divided at the top. Its leaves can only be seen in the spring. In Botrychium simplex the upper pinnules are somewhat fused together and not separate. The fertile leaf often arises from near the ground level. Botrychium matricariifolium pinnules are long and narrow with a central midrib and secondary segments. Reliable field determination of moonworts depends on the careful use of technical keys and comparison with silhouette outlines of verified specimens. Identification can be complicated because there is often a high degree of morphological variability between individuals in a population and between populations of the same species. Several species may grow together at the same site, and the few diagnostic characters may not be apparent in small plants.

Mature fronds of this plant are visible from June to August. This should be the time of year when surveys for this species are conducted.

The time of year you would expect to find Mingan Moonwort vegetative and fruiting in New York.

Cobb, Boughton. 1984. A field guides to ferns and their related familes, Northeastern and Central North America with a section on species also found in the British Isles and western Europe. The Peterson Field Guide Series. Boston, New York.