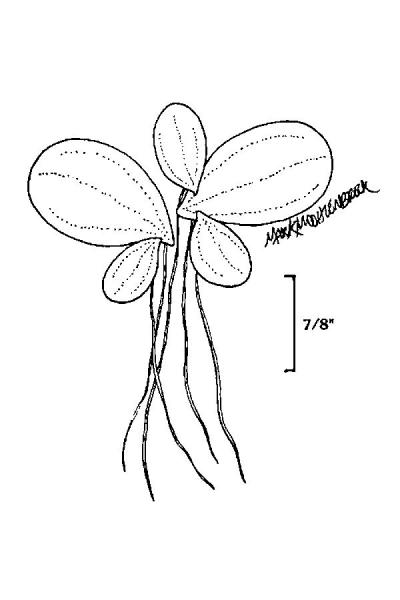 Lemna is the ancient Greek name for this water plant given by Theophrastus, the "Father of Botany". The species name means very small (Fernald 1950) and is a good name for a plant no bigger than the point of a pencil.

There are eight existing populations but there is little detailed information on their size and quality. The plant was recorded in 18 different locations between the late 1800s and the mid-1940s and most of them still need to be rechecked. Five populations no longer exist because their habitat has been destroyed.

There are no recent re-surveys to determine short-term trends.

This aquatic plant seems to be in decline since there were 18 known populations in the past but now only eight are known but it is being found more now that we know the characters better. Many of the ponds where it occurred are now developed or have been altered from the original natural state.

Specific threats are unknown at this time but many of the ponds on Long Island are subject to shoreline development, pollution and herbicide treatments.

Management needs are unknown at this time.

More collection needs to be done of these small aquatic plants on Long Island to determine the relative abundance of each species.

There are historical records scattered throughout the lower Hudson counties and on Long Island.

This aquatic plant occurs along the Atlantic coastal states from Vermont south to South Carolina and along the Gulf Coast from Georgia to Louisiana and eastern Texas. It is less common in the upper Midwest and South Central states but becomes more common as it reaches its western limits in Nebraska and Kansas.

This tiny aquatic plant has a thallus that is convex on both sides, with a prominent papilla at the node and apex above, and usually with smaller papillae along the midline. They have obliquely obovate leaves with rounded sides, 1-2.5 mm long, commonly 1-2 times as long as wide. The leaves are not anthocyanic. The root tip is pointed and the seeds orthotropous.

Distinguishing characteristics: thallus convex on both sides, with a prominent papilla at node and apex above, and usually with smaller papillae along the midline, obliquely obovate with rounded sides, 1-2.5 mm, commonly 1-2 times as long as wide, not anthocyanic; root tip pointed; seeds orthotropous. Best life stage for ID: in fruit or flower. Characteristics needed to ID: vegetative plants, fruit or flowers helpful.

The best time to identify this plant is when it is in leaf.

It can be identified vegetatively June through October. It reproduces during September and October.

The time of year you would expect to find Minute Duckweed vegetative in New York. 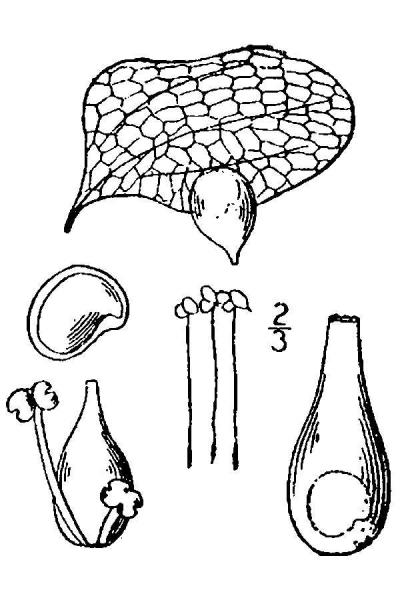