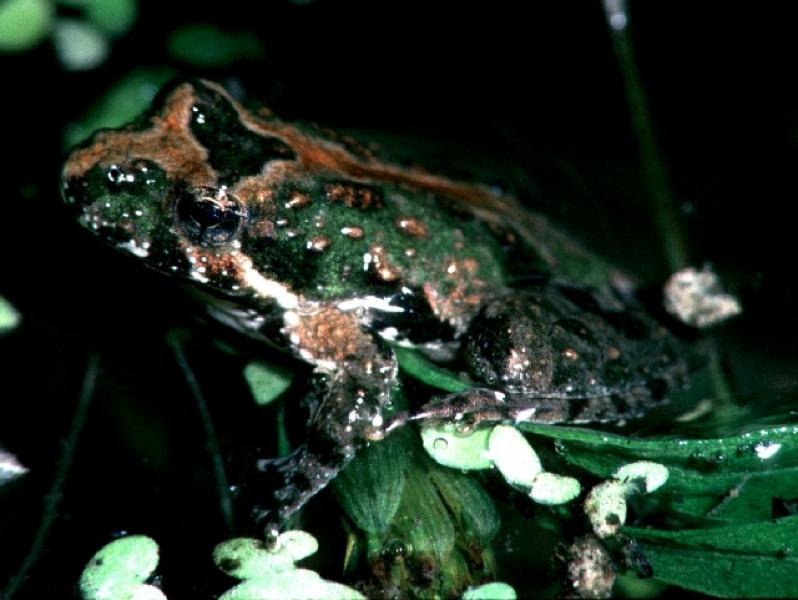 A Northern Cricket Frog can jump up to 5 feet--or 50 times its body length.

The Northern Cricket Frog's range in New York has contracted significantly over the past century. Dozens of known populations have been extirpated, including all of those on Long Island and Staten Island, as well as several on protected State Parks in southeastern New York. Only a quarter of those that remain (13) are deemed to be of fair or better viability. All but two of these occurs on private land, where ongoing and persistent threats continue to imperil this species.

Populations from at least nine known sites have become extirpated since the late 1980s, although most were already quite small (<10 calling males). In addition, many of the extant populations have declined dramatically since the early to mid 1990s. Two new sites were discovered in Dutchess County in 1993, extending the range east of the Hudson River (Dickinson 1993). It is unclear whether this represented a range expansion or increased survey effort.

Historically this species was found on Long Island, Staten Island, and in the lower Hudson River valley. By 1930, Long Island populations had disappeared, as had those on Staten Island by the mid 1970s (Gibbs et al. 2007). Cricket frogs have become extirpated from no fewer than 20 historically occupied sites since about 1900, representing a significant range contraction within the state.

Exact causes for the Northern Cricket Frog's decline in New York are not certain, but it is clear that the species cannot tolerate urbanization above some threshold. The small body size, coupled with a vulnerable overwintering strategy and a short life span (average 4 months; max 4-5 years) makes (sub)populations highly extinction prone. Population size therefore fluctuates widely, and persistence at individual sites is highly variable from year to year. Gray and Brown (2005) outlined an extinction scenario that reflected a combination of 1) a brief adult life span; 2) small population size; 3) prolonged droughts; and 4) anthropogenic alterations of aquatic breeding habitats. Hecht et al. (1996) mentioned predation (by bullfrogs), overwintering mortality, landfill leachate, invasive plants, water level fluctuations, water quality, and pesticides as potential threats to viability. This last threat appears to be especially noteworthy since the sex ratios of cricket frogs in Illinois have been shown to be altered by several different organochlorine pesticides (Reeder et al. 1998), and sex ratios in the northern portion of the species' range appear to be male biased in comparison to those in the south. Furthermore, the commonly applied herbicide Atrazine has been implicated in sex ratio reversal in cricket frog populations (Reeder et al. 1998).

The restoration of populations from extirpated sites should be a management priority. Since most of the extant populations occur on scattered waterbodies on private property, the implementation of any comprehensive management strategy will be difficult.

Life history, (meta)population dynamics and causes for decline all merit research focus in New York. Because of the wide geographic variability this species demonstrates, even within the northern portion of its range, studies specifically tailored to New York will need to be implemented. However, because of the very low population numbers and their occurrence chiefly on private lands, any comprehensive research project on cricket frogs in southeastern New York will be challenging.

This species inhabits the edges of sunny marshes, marshy ponds, impoundments, beaver wetland complexes, farm ponds and small slow-moving streams in open country; deep water is typically avoided. In New York, Northern Cricket Frog is a habitat specialist inhabiting only a few wetlands with floating mats of mosses, water lilies, and other aquatic plants giving the appearance of sparsely vegetated mud flats (Gibbs et al. 2007). Reproductive success appears to be greatest in eutrophic ponds. Many of the inhabited ponds and lakes have recently been altered by beaver activity with unknown consequences for Northern Cricket Frog habitat suitability. Adults may periodically range into adjacent uplands in some regions.

The range of Northern Cricket Frogs in New York is currently confined to the southeastern portion of the state in Orange, Ulster, and Dutchess counties. There are also unconfirmed reports from Westchester County. It formerly occured on both Long Island and Staten Island, but was extirpated from these heavily urbanized areas by the 1970s (Gibbs et al. 2007). New York populations are at the northeastern extent of the species' range.

This species (comprising three recognized subspecies: A. c. crepitans [Eastern], A. c. blanchardii [Blanchard's], and A. c. paludicola [Coastal]) is known from southeastern New York, the southern Great Lakes region, and southern South Dakota to southeastern New Mexico, southern Texas and adjacent Mexico, and the Gulf Coast east to northwestern Florida. Isolated populations occur on the Coastal Plain of South Carolina. It is largely absent from the higher elevations of the central Appalachians in southwestern Virginia, West Virginia and Pennsylvania. In Canada, the species has been recently extirpated from its only known locale on Pelee Island in extreme southwestern Ontario (Gray et al. 2005). Northern Cricket Frogs are becoming extirpated in a number of the northernmost peripheral areas (e.g., Wisconsin, Michigan, Illinois), while populations appear to remain stable in the central and southern portions of the range.

The Northern Cricket Frog is one of the smallest vertebrates in New York (~1"). They have small dorsal warts, a light belly, and a dark triangle pointing backward between the eyes. Most specimens have a brownish-greenish background color, but there is wide variation from subtle browns or grays to stripes of brilliant reds or greens. The male's throat patch is yellow during the breeding season.

Females can produce 200-400 eggs, but they are rarely seen because they are attached to vegetation and laid singly or in small clusters below the water surface. The tadpoles, which can be identified by a black tip on the tail, emerge from the eggs within a few days, and are generally bottom feeders. The call starts out as a slow "click, click, click" that is repeated more rapidly for a half minute or so, resembling an insect chorus, giving the frog its common name. The sound can be imitated by tapping two pebbles together (Gibbs et al. 2007).

Males call from plants rooted in the floating mats, or from the surface of the water. Intense competitive interactions often occur between calling males. Although it is considered a treefrog, this species is a poor climber and is usually found within a few inches of the ground. Northern Cricket Frogs employ a unique overwintering mechanism by burrowing into preexisting shallow cracks or crayfish burrows in a band of moist soil near the edge of ponds and streams (Irwin 2005), possibly communally. It has also been suggested that they may overwinter terrestrially in forested uplands beyond 150 meters (Hecht et al. 2000), and possibly up to 450 meters (A. Breisch, personnal communication) from breeding ponds. When approached by a potential predator, Northern Cricket Frogs make several quick zigzag leaps, diving beneath the water.

Larvae feed on periphyton and phytoplankton. Adults are opportunistic feeders both day and night, eating various small invertebrates obtained in or near the water. Food items include insects, spiders, annelids, mollusks, and crustaceans (Gray et al. 2005)

The frogs emerge from hibernation in late March or early April and begin to forage for terrestrial arthropods. Chorusing finally begins in mid-May and lasts until mid-July and the strongest choruses are heard on warm, humid nights. These are the last frogs to breed in New York. The eggs hatch in a few days, and larvae metamorphose before mid-September when they are barely 1/2" long. Metamorphs and adults move toward overwintering sites during late September through October (Gibbs et al. 2007).

The time of year you would expect to find Northern Cricket Frog present, active, reproducing, and larvae present and active in New York. 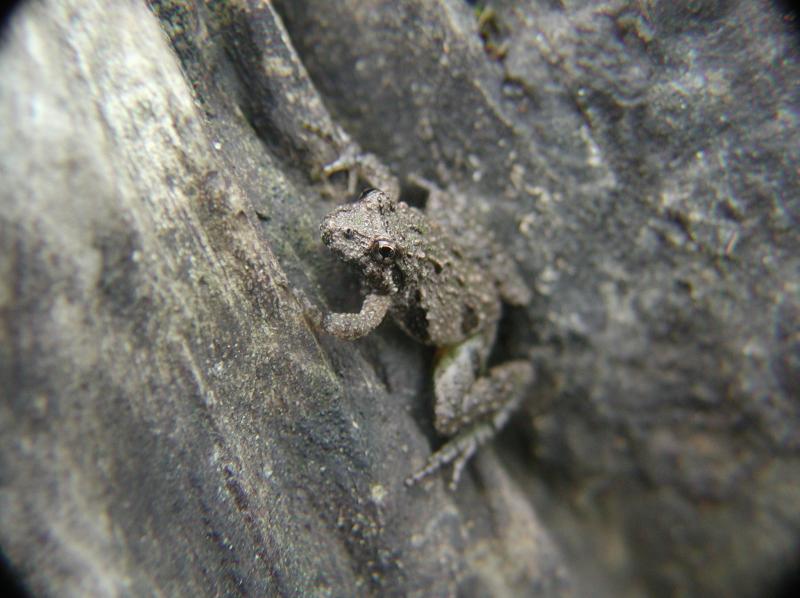 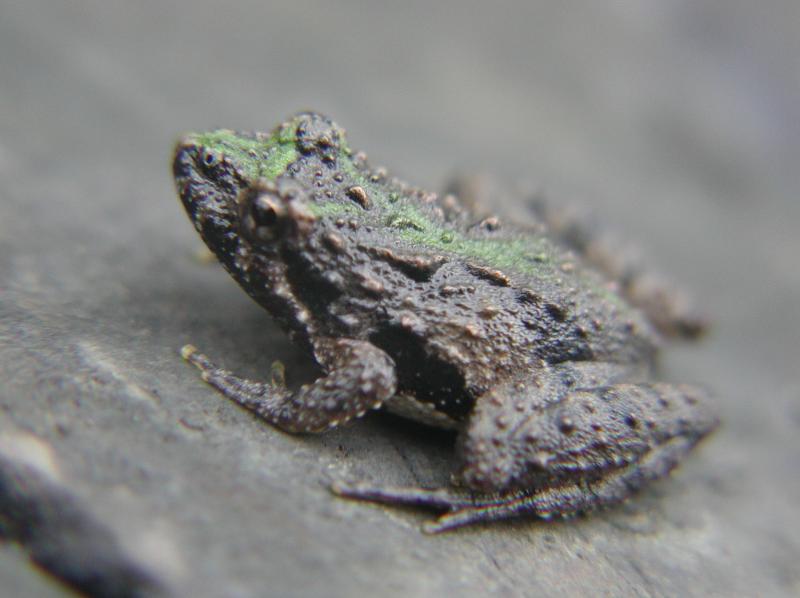 Mathewson, R.F. 1955. Reptiles and amphibians of Staten Island. Proceedings of the Staten Island Institute of Arts and Sciences. 17(2):28-50.

Information for this guide was last updated on: April 3, 2019