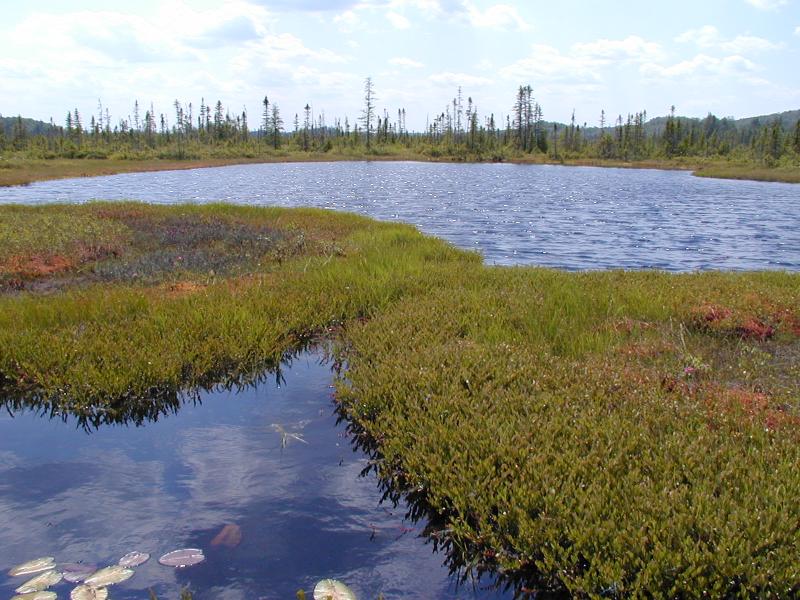 A common feature of bog lakes is the development of a false bottom at a depth of about 0.3 to 0.9 m (1 to 3 ft) below the surface. The false bottom is composed of colloidal material and dissolved humus held in suspension that appears to be a more or less continuous bottom. When disturbed, the suspended material quickly clouds the upper layer of clear water, then slowly settles when the water becomes quiet again.

There are several thousand occurrences statewide. Many occurrences are presumed to have good viability and are protected on public land or private conservation land. This community has statewide distribution, and includes several large, high quality examples especially in the Adirondacks. The current trend of this community is probably stable for occurrences on public land, or declining slightly elsewhere due to moderate threats related to development pressure or alteration to the natural hydrology. This community has declined moderately to substantially from historical numbers likely correlated with past hydrological alterations and excessive clearing/development of the surrounding landscape.

The numbers and acreage of bog lakes and ponds in New York have probably remained stable in recent decades as a result of wetland protection regulations. There may be a few cases of slight decline due to alteration of hydrology (e.g., ditching and impoundments) and reduced water quality from nutrient input from surrounding developed uplands.

The numbers and acreage of bog lakes and ponds in New York have probably declined moderately from historical numbers likely correlated to alteration of hydrology (e.g., ditching and impoundments) and reduced water quality from nutrient input from surrounding developed uplands. Peatlands may expand over and close smaller bog lakes and ponds over the long term (i.e., centuries) to form a "lake-fill bog" (Daman and French 1987).

Where practical, maintain or increase the adjacent peatland and upland buffer to reduce storm-water, pollution, and nutrient run-off, while simultaneously capturing sediments before they reach the bog lake/pond. Buffer width should take into account the erodibility of the surrounding soils, slope steepness, and current land use. If possible, minimize the number and size of impervious surfaces in the surrounding landscape. Avoid habitat alteration within the lake and surrounding landscape. For example, roads should not be routed through the lakeshore buffer area. If a lake must be crossed, then bridges and boardwalks are preferred over filling and culverts. Restore lakes that have been affected by unnatural disturbance (e.g., remove obsolete impoundments and ditches in order to restore the natural hydrology). Prevent the spread of invasive exotic species into the lake through appropriate direct management, and by minimizing potential dispersal corridors.

Research is needed to fill information gaps about bog lakes and ponds, especially to advance our understanding of their classification, hydrology, floristic variation, and characteristic fauna. In addition, there is a need to collect sufficient quantitative data to support the recognition of a higher pH variant tentatively called "circumneutral bog lake" and change the current name to "acidic bog lake." More data are needed to consider spitting this community into "bog lake" and "bog pond" types, perhaps by using a size threshold. Lastly, The distinction between meromictic lake and bog lake needs to be more critically evaluated, because occasionally bog lakes can also become meromictic or chemically stratified.

Bog lakes and ponds are sparsely scattered but widespread throughout New York State north of the Coastal Lowlands ecozone; especially common in the Adirondacks. They are limited to areas in the state where sufficient peat has accumulated within a basin or kettlehole leaving an open water "eye" within the peatland.

This broadly-defined community may be worldwide. Examples with the greatest biotic affinities to New York occurrences are suspected to span north to southern Canada, west to Minnesota, southwest to Indiana and Tennessee, and southeast to South Carolina.

The aquatic community of a dystrophic lake (an acidic lake with brownish water that contains a high amount of organic matter) that typically occurs in a small, shallow basin (e.g., a kettehole) that is protected from wind and is poorly drained. These lakes occur in areas with non-calcareous bedrock or glacial till; many are fringed or surrounded by a floating mat of vegetation (in New York usually either bog or poor fen). Characteristic features of a dystrophic lake include the following: murky water that is stained brown, with low transparency; water that is low in plant nutrients (especially low in calcium), with naturally low pH (less than 5.4); and the lake may have oxygen deficiencies in deeper water (the profundal zone). The lack of calcium blocks bacterial action, reducing the rate of decay of organic matter with subsequent accumulation of peat or muck sediments. Colloidal and dissolved humus material reduces transparency and increases acidity of the water. Species diversity in bog lakes is low in all types of aquatic organisms (phytoplankton, macrophytes, zooplankton, zoobenthos, and fish); many bog lakes have no fish at all. The abundance of each species present is also low in all types of organisms, except for aquatic macrophytes and peat mosses (Sphagnum spp.) along the edge of the bog mat. A common feature of bog lakes is the development of a false bottom at a depth of about 0.3 to 0.9 m (1 to 3 ft) below the surface. The false bottom is composed of colloidal material and dissolved humus held in suspension that appears to be a more or less continuous bottom. When disturbed, the suspended material quickly clouds the upper layer of clear water, then slowly settles when the water becomes quiet again. Occasionally bog lakes become meromictic or chemically stratified; the chemical gradient supercedes the usual stratification by temperature.

Known examples of this community have been found at elevations between 1,534 feet and 1,780 feet.

Bog lakes and ponds are fun to explore in mid- to late summer by canoe when fragrant white water lily and spatter dock are in bloom. Frozen bog lakes can be easier to access on foot in the winter. 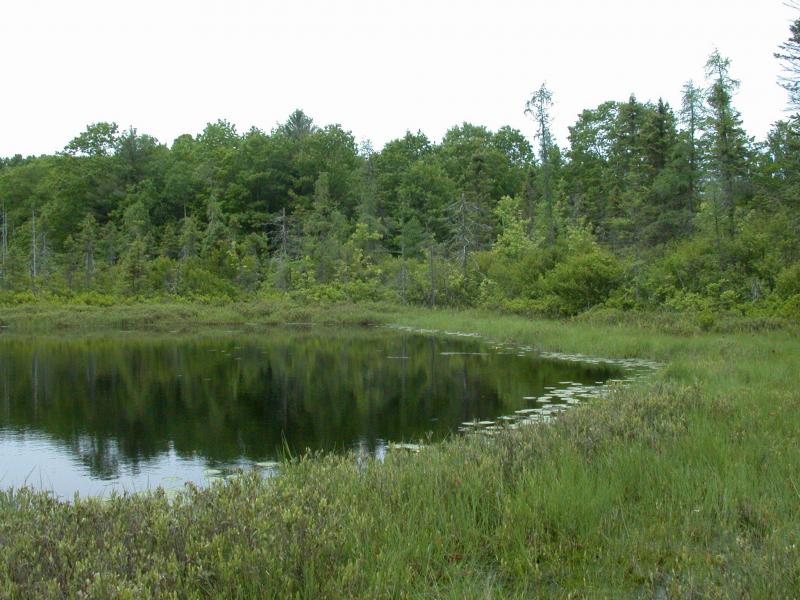 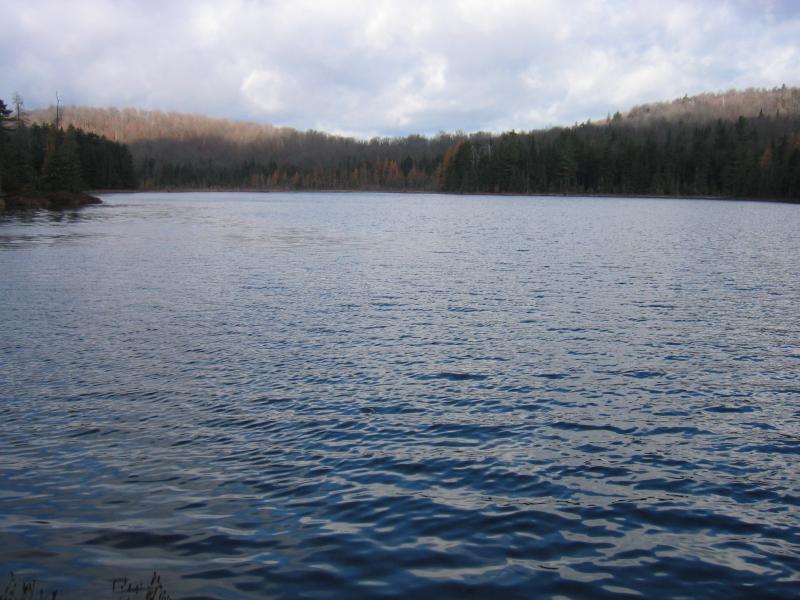 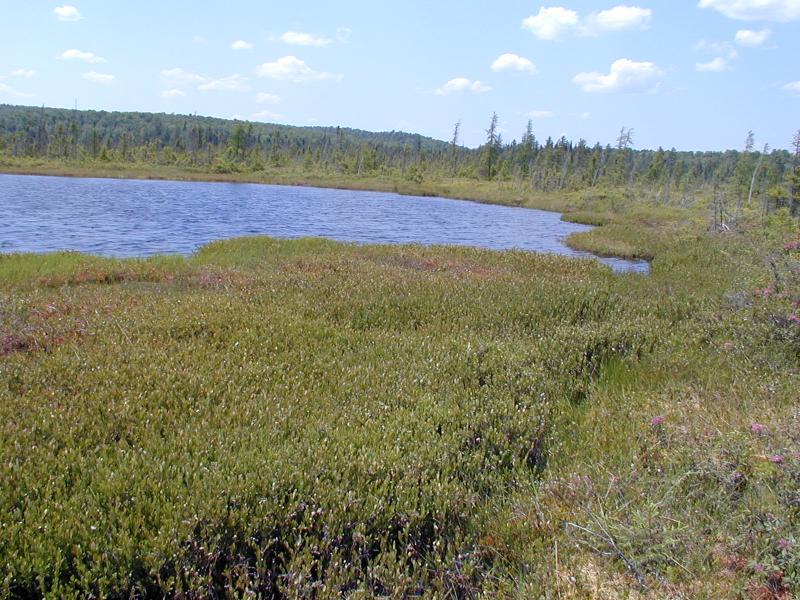 This figure helps visualize the structure and "look" or "feel" of a typical Bog Lake/Pond. Each bar represents the amount of "coverage" for all the species growing at that height. Because layers overlap (shrubs may grow under trees, for example), the shaded regions can add up to more than 100%.

Information for this guide was last updated on: March 8, 2019