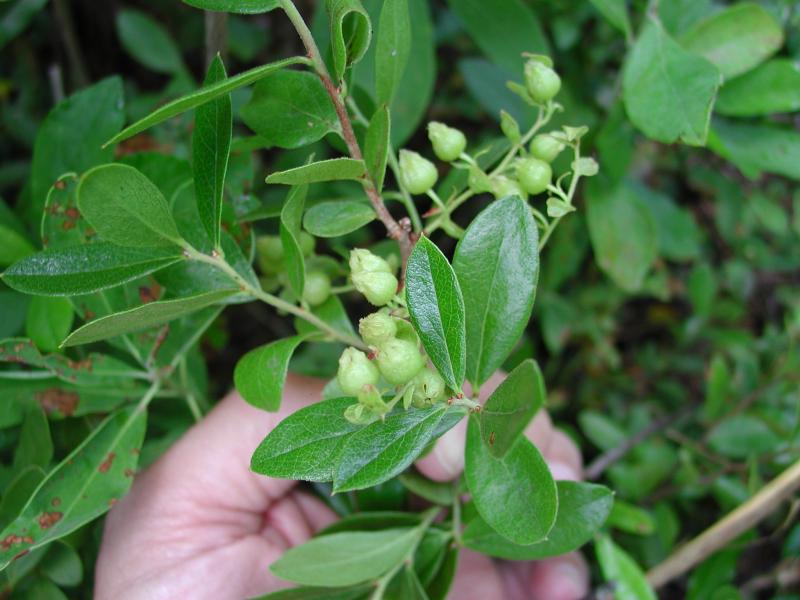 State Conservation Status Rank
S1S2
Critically Imperiled or Imperiled in New York - Especially or very vulnerable to disappearing from New York due to rarity or other factors; typically 20 or fewer populations or locations in New York, very few individuals, very restricted range, few remaining acres (or miles of stream), and/or steep declines. More information is needed to assign either S1 or S2.
Global Conservation Status Rank
G4G5
Apparently or Demonstrably Secure globally - Uncommon to common in the world, but not rare; usually widespread, but may be rare in some parts of its range; possibly some cause for long-term concern due to declines or other factors. More information is needed to assign either G4 or G5.

The genus Gaylussacia is named after the famous French chemist and physicist Joseph Louis Gay-Lussac. The species name means a bramble of shrubs, usually thorny, or just bushy. This is the only one of our three huckleberries that likes its feet wet. The black huckleberry and dangleberry are also much more common. Like their cousins the blueberries, the fruits are edible but they only have 10 seeds instead of hundreds and there are glandular hairs on the surface. They lose their juiciness later in the summer so it's best to taste them right after they ripen.

There are five existing populations but only one of them is large and protected. There are 18 historical occurrences. Some of them need to be resurveyed but many of them are considered extirpated.

Short-term trends are unknown but probably stable since only one population has been resurveyed recently and its condition has stayed the same.

Some plants occur along roadsides or in powerlines that may be threatened by improper maintenance techniques that destroy the plants. Succession may also threaten some populations that are in open habitats.

Protect the wetlands where this plant occurs by establishing buffers to conserve hydrology and prevent direct impact to the plants. Remove any threat by phragmites or purple loosestrife. If the wetland opening is artificial, continue to keep it open by preventing succession without directly impacting the plants.

Research is needed to determine the specific habitat preference of this species since it occurs in small portions of larger wetlands. This would help develop a better search image for habitat and improve predictive modeling. Efforts to augment populations should also be studied.

In New York Gaylussacia dumosa has been found in dwarf shrub bogs along the edge of a lake, in a shrub swamp within a pitch pine forest, and in wet, Sphagnous openings along roadsides and trailsides (New York Natural Heritage Program 2007). Dry barrens and pinelands (Fernald 1970). Usually in wet, sandy soil or in bogs, on or near the coastal plain (Gleason and Cronquist 1991).

In New York, Dwarf Huckleberry is known from Long Island and the Lower Hudson Valley.

Dwarf Huckleberry is found from Quebec and Newfoundland in the north, south through New England (excluding Vermont), the Mid-Atlantic and Appalachian states, to Florida and Louisiana.

Dwarf Huckleberry is a perennial, low-growing (.1 to .5 m tall) shrub, spreading by long woody rhizomes. The leaves are entire, dark shiny green, deciduous, and 2-4 cm long, with shiny resin dots visible on the lower leaf surface only. The flowers are bell-shaped and white, about 5-9 mm long, and the pedicels and infloresence are pubescent. The edible fruit are black and many-seeded.

Gaylussacia bigeloviana can be identified from either vegetative or fruiting material.

A dwarfed and vegetative Gaylussacia baccata may look similar to G. dumosa, but G. baccata leaves have resin dots covering both their upper and lower surfaces.

Gaylussacia dumosa flowers in early summer and the fruits can persist into late September.

The time of year you would expect to find Bog Huckleberry flowering and fruiting in New York. 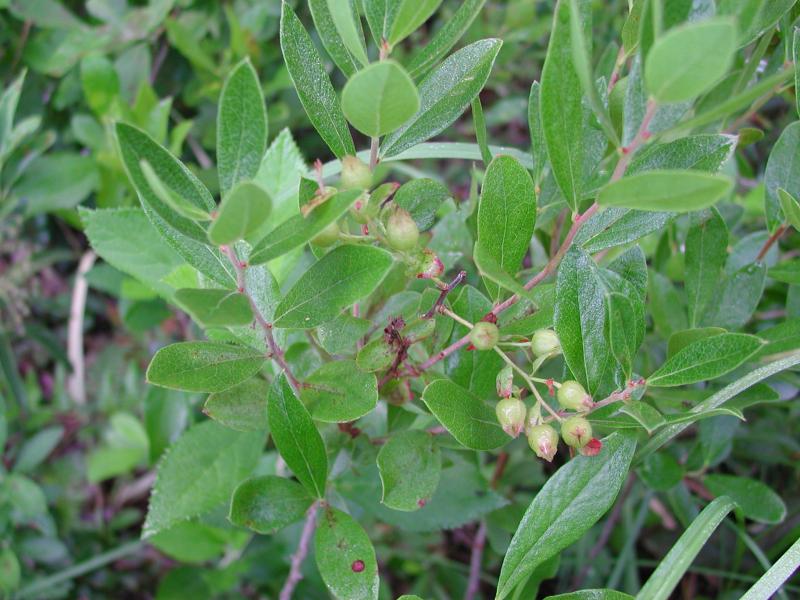 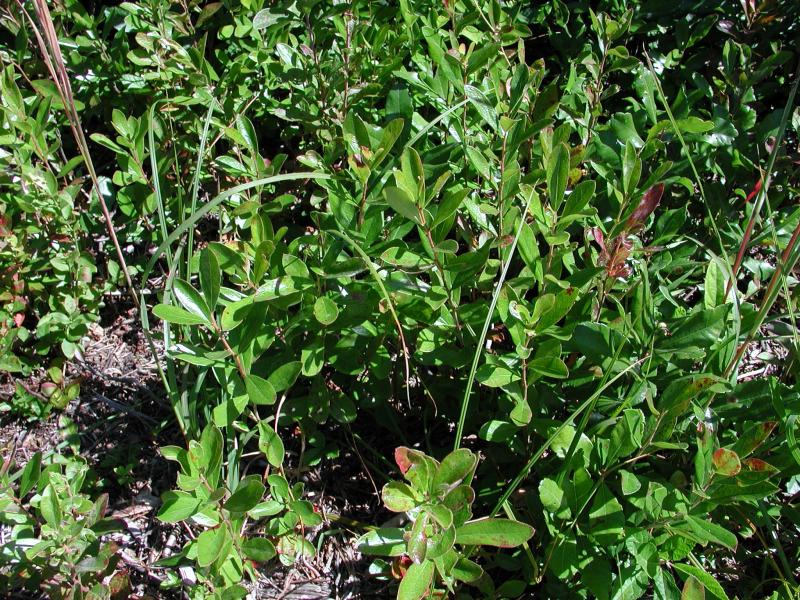 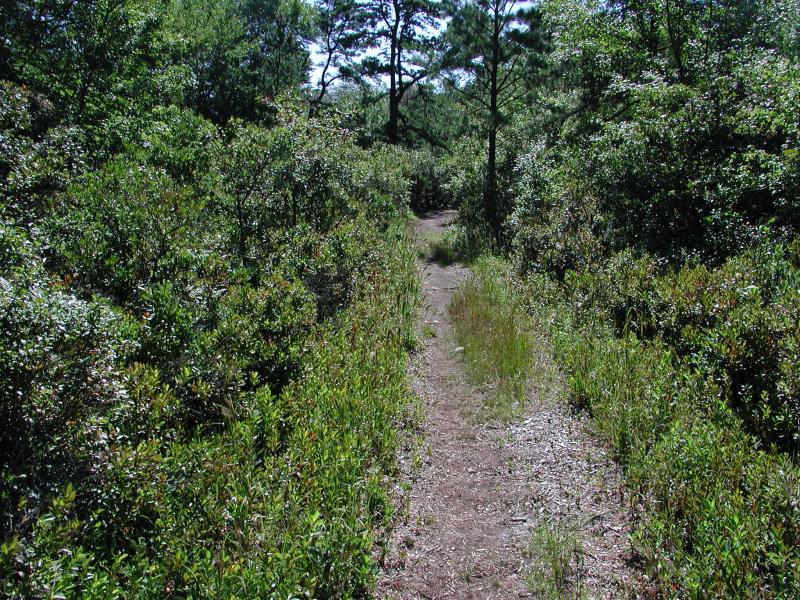 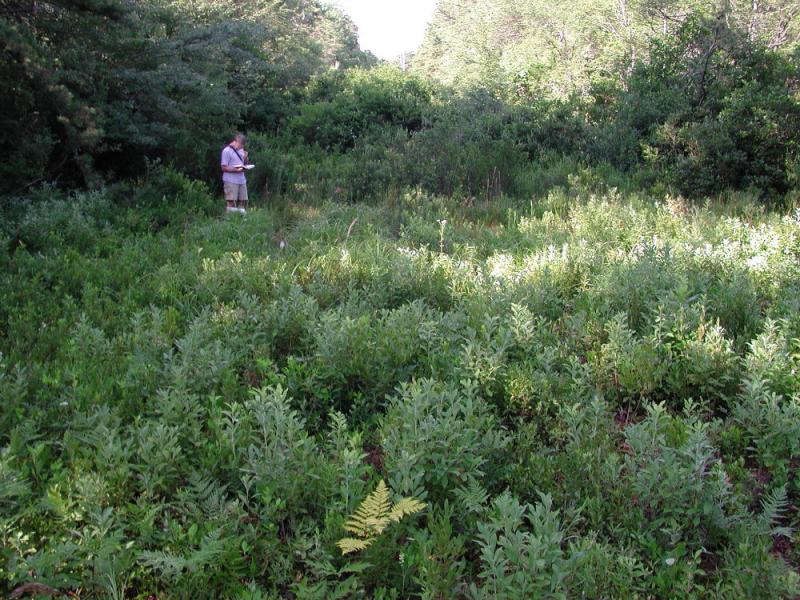 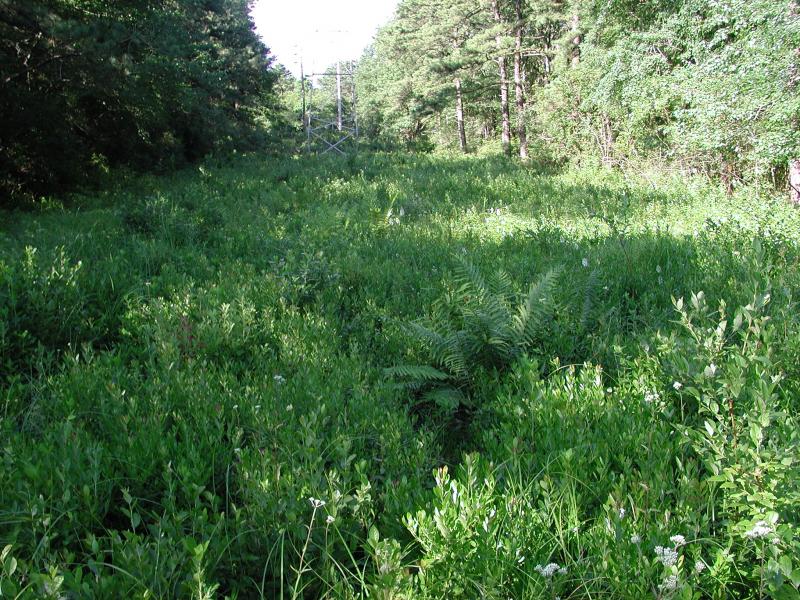 The old species Gaylussacia dumosa and its 4 subspecies are now four seperate species.