Cranberries (Vaccinium macrocarpon, V. oxycoccos) grow wild in dwarf shrub bogs. They also grow on farms in the northeastern states, including New York, in settings that mimic bogs. The surface of a dwarf shrub bog, as with other bogs, is predominately peat on top of silt and clay. Commercial cranberries grow on low-lying branches in impermeable beds layered with sand, peat, gravel, and clay. They need an inch of water a week to grow. Growers use water to protect cranberries from frost during cold months and hot weather in the summer. Commercial bogs use a system of wetlands, uplands, ditches, flumes, ponds, and other water bodies.

There are several hundred occurrences statewide. Many documented occurrences have good viability and are protected on public land or private conservation land. This community has statewide distribution, and includes several very large, high quality examples. The current trend of this community is probably stable for occurrences on public land, or declining slightly elsewhere due to moderate threats related to development pressure or alteration to the natural hydrology. This community has declined moderately to substantially from historical numbers likely correlated with peat mining and excessive clearing/development of the surrounding landscape.

The numbers and acreage of dwarf shrub bogs in New York have probably remained stable in recent decades as a result of wetland protection regulations. There may be a few cases of slight decline due to alteration of hydrology from impoundments (conversion to other palustrine community types).

The numbers and acreage of dwarf shrub bogs in New York have probably declined moderately to substantially from historical numbers likely correlated with initial peat mining and logging of the surrounding landscape (increasing nutrient run-off into bogs).

Because dwarf shrub bogs are naturally acidic and low in nutrients, they are particularly susceptible to alteration by elevated nutrient inputs. Bogs may require larger buffers than other wetland types because of their high susceptibility to changes in nutrient concentrations. Direct impacts are typically most serious within 300 feet (90 m) of wetland areas (Sperduto et al. 2000).

Where practical, establish and maintain a natural wetland buffer to reduce storm-water, pollution, and nutrient run-off, while simultaneously capturing sediments before they reach the wetland. Buffer width should take into account the erodibility of the surrounding soils, slope steepness, and current land use. Wetlands protected under Article 24 are known as New York State "regulated" wetlands. The regulated area includes the wetlands themselves, as well as a protective buffer or "adjacent area" extending 100 feet landward of the wetland boundary (NYS DEC 1995). If possible, minimize the number and size of impervious surfaces in the surrounding landscape. Avoid habitat alteration within the wetland and surrounding landscape. For example, roads and trails should be routed around wetlands, and ideally not pass through the buffer area. If the wetland must be crossed, then bridges and boardwalks are preferred over filling. Restore dwarf shrub bogs that have been unnaturally disturbed (e.g., remove obsolete impoundments and ditches in order to restore the natural hydrology). Prevent the spread of invasive exotic species into the wetland through appropriate direct management, and by minimizing potential dispersal corridors, such as roads.

Survey for occurrences statewide to advance documentation and classification of peatlands. A statewide review of the acidic peatlands is desirable, similar to the studies done in New Hampshire (Sperduto et al. 2000), Massachusetts (Kearsley 1999), and similar to what New York Natural Heritage did for rich fens (Olivero 2001).

Research is needed to fill information gaps about dwarf shrub bogs, especially to advance our understanding of their classification, ecological processes (e.g., fire), hydrology, floristic variation, characteristic fauna, and bog development and succession. This research will provide the basic facts necessary to assess how human alterations in the landscape affect peatlands, and supply a framework for evaluating the relative value of peat bogs (Damman and French 1987).

This community is currently found throughout upstate New York with numerous examples in the northwestern Adirondacks and the Tug Hill region. Several scattered examples of dwarf shrub bog are known from eastern Lake Ontario, the northern edge of the High Allegheny Plateau, the Rensselaer Plateau, and the lower Hudson Valley. It is absent from the coastal areas where it is replaced with coastal plain poor fen.

The range is probably widespread throughout Canada and along the northeastern fringe of the United States. The range is estimated to span northeast to Newfoundland, northwest possibly to northwestern Canada, west to Minnesota, southwest to Michigan, and southeast to Massachusetts, New Jersey, and Pennsylvania.

A peatland dominated by low-growing evergreen ericaceous (heath-like) shrubs and peat mosses. The surface of the peatland has small mounds and depressions called hummocks and hollows. These bogs have more than 50% cover of low-growing shrubs, and the hummocks tend to have a higher abundance of shrubs than the hollows. Water is usually nutrient-poor and acidic. The dominant shrub is often leatherleaf (Chamaedaphne calyculata), which may make up more than 50% of the total vegetation cover. Shrubs are typically 1 m or less in height, and are taller than the herbs.

A peatland dominated by dwarf evergreen shrubs (>50% cover), such as leatherleaf (Chamaedaphne calyculata).

Known examples of this community have been found at elevations between 250 feet and 1,840 feet. 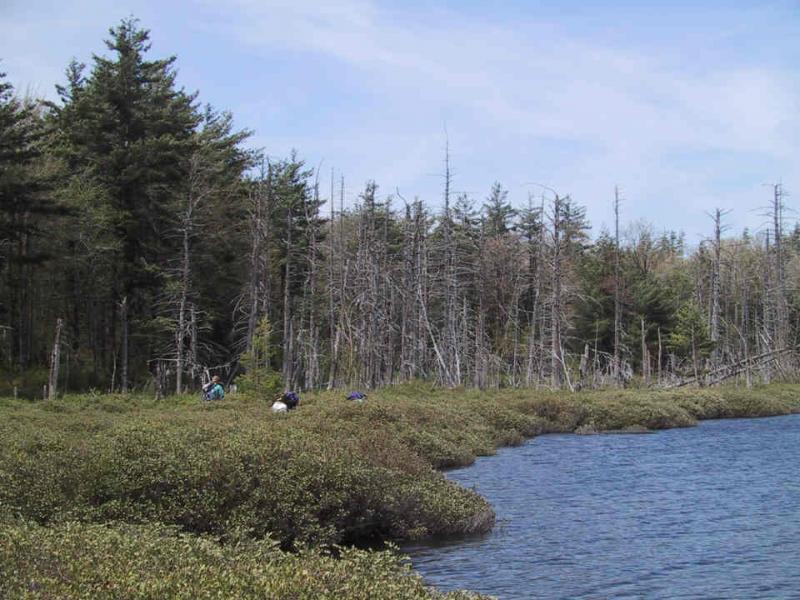 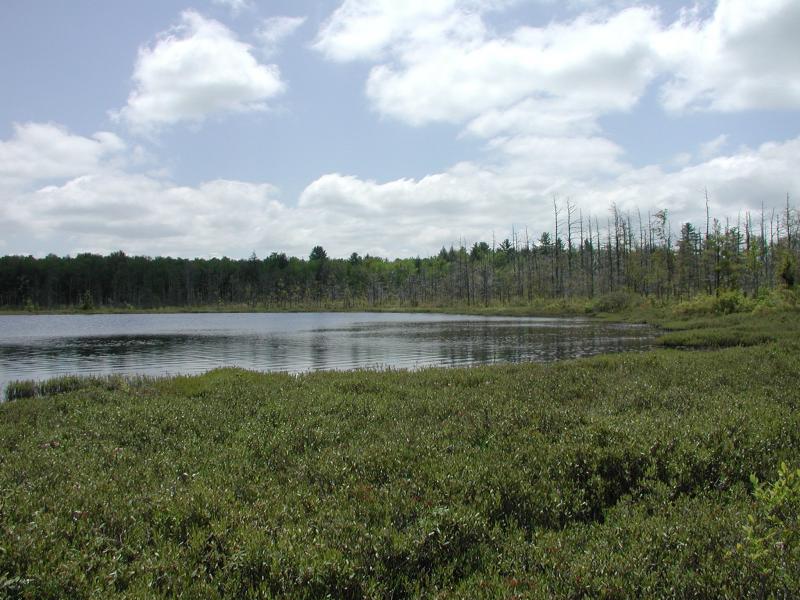 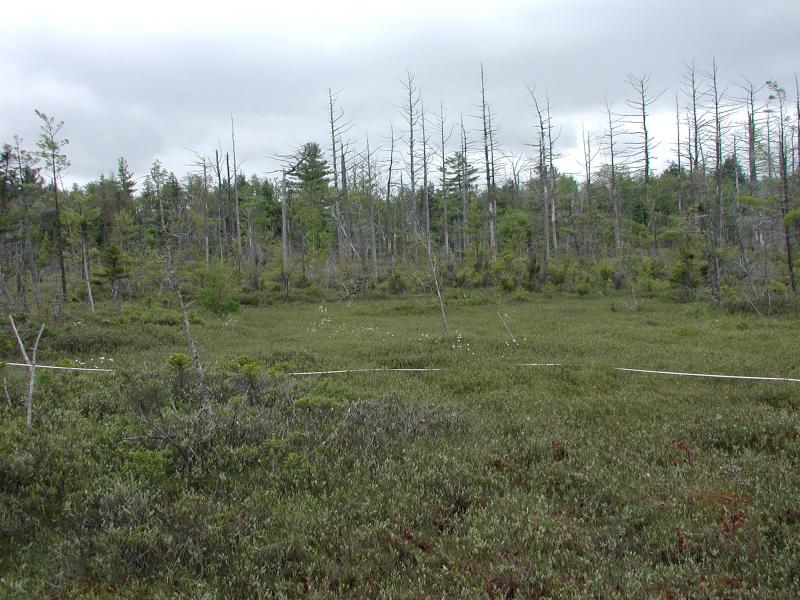 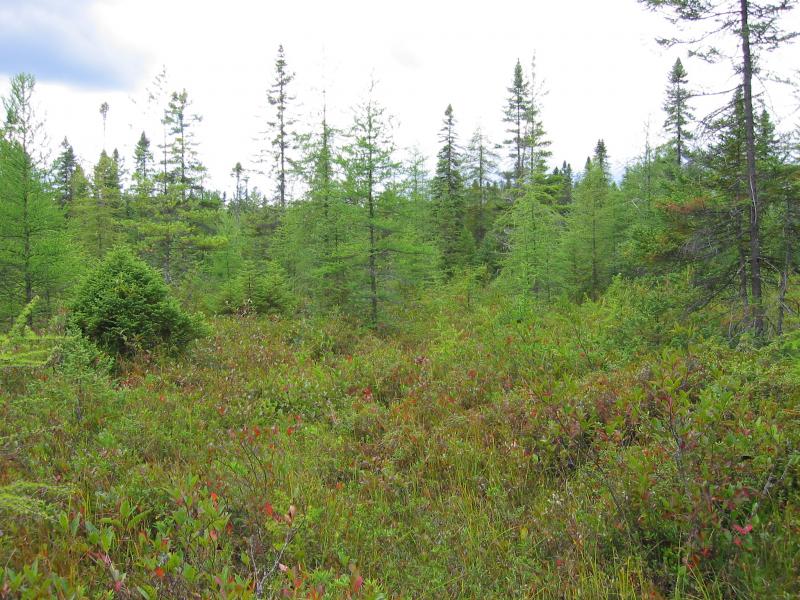 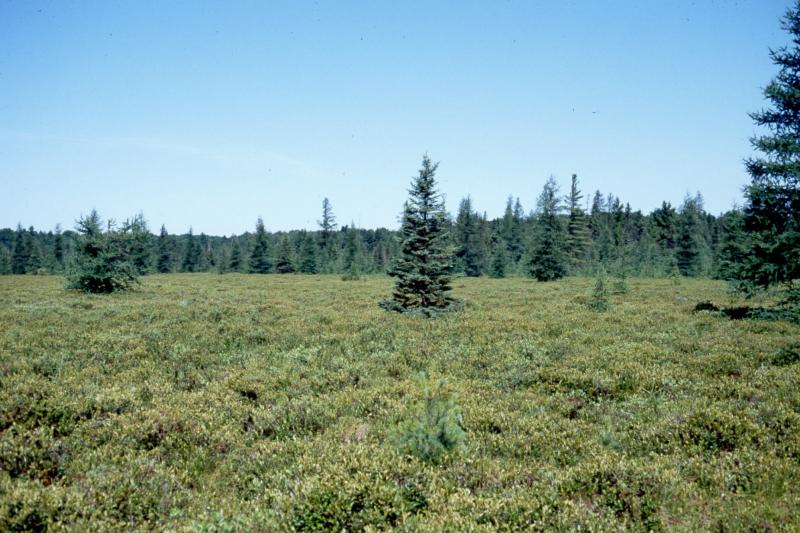 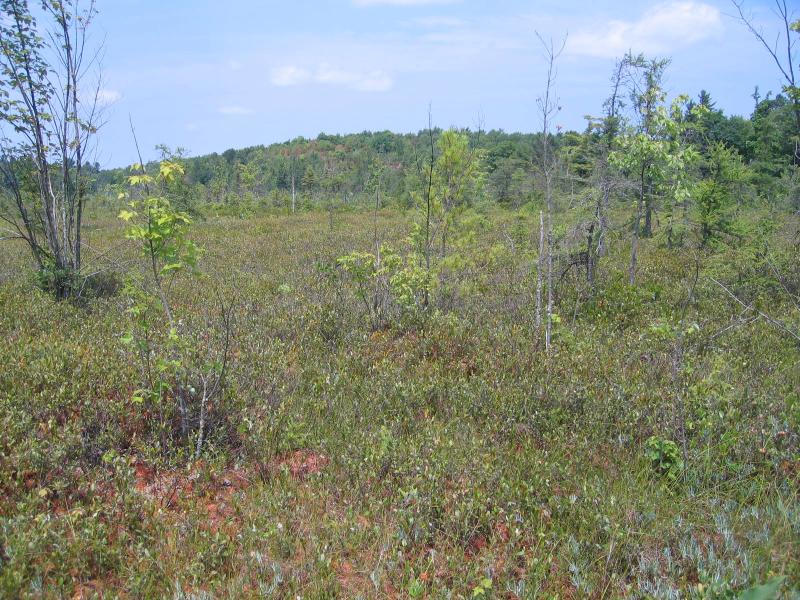 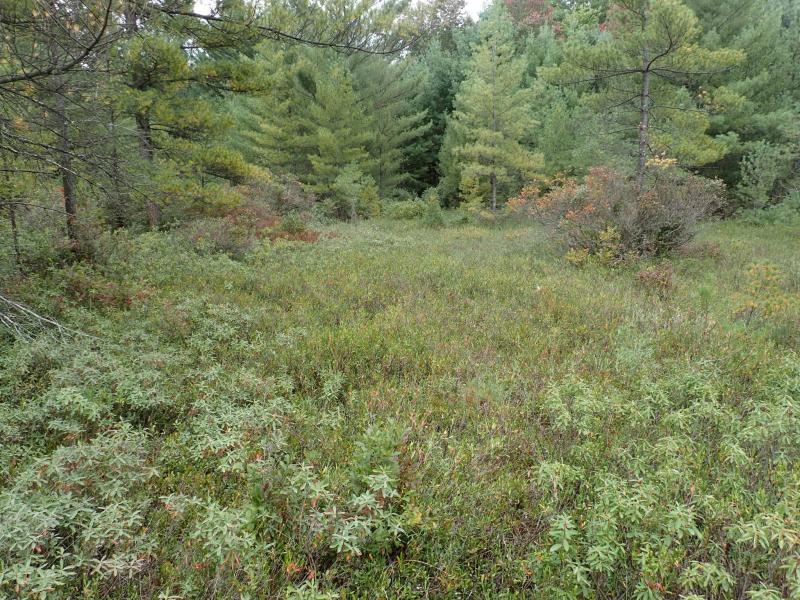 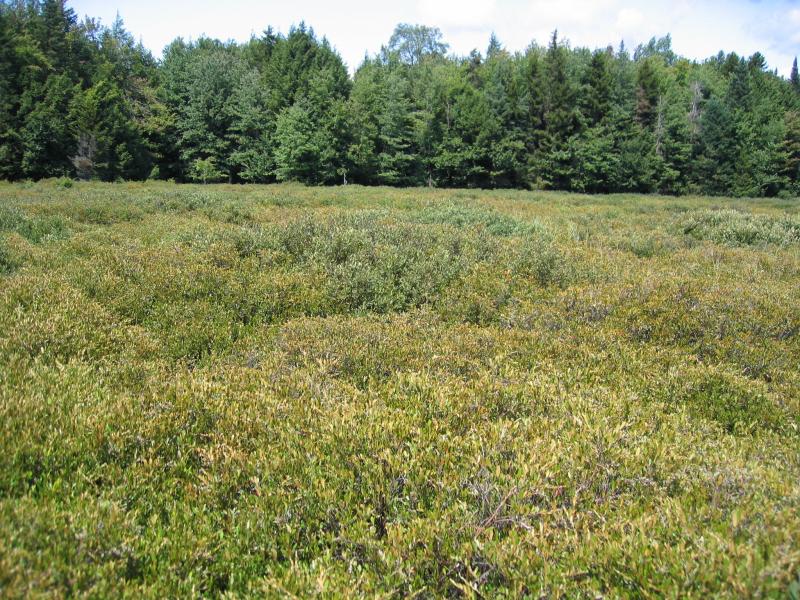 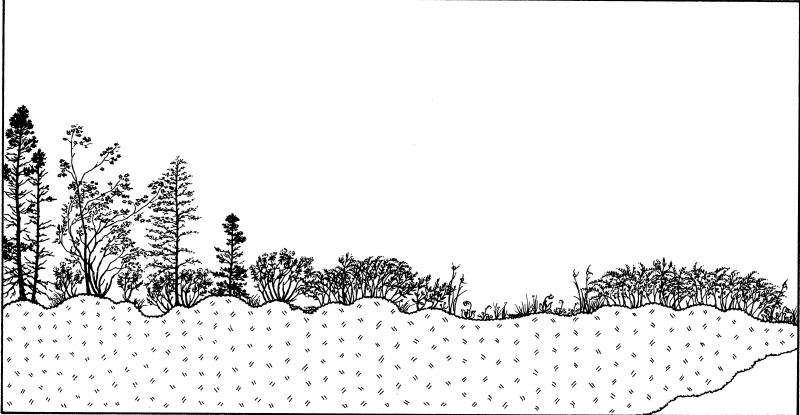 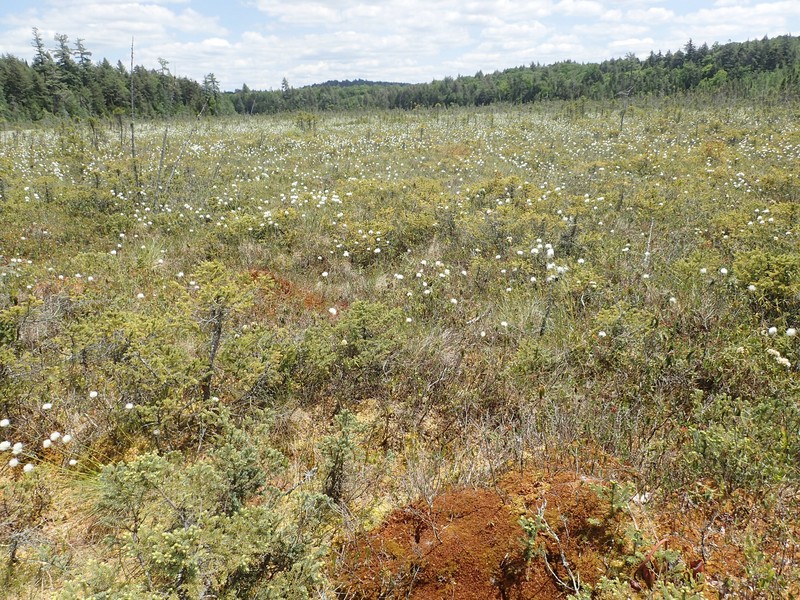 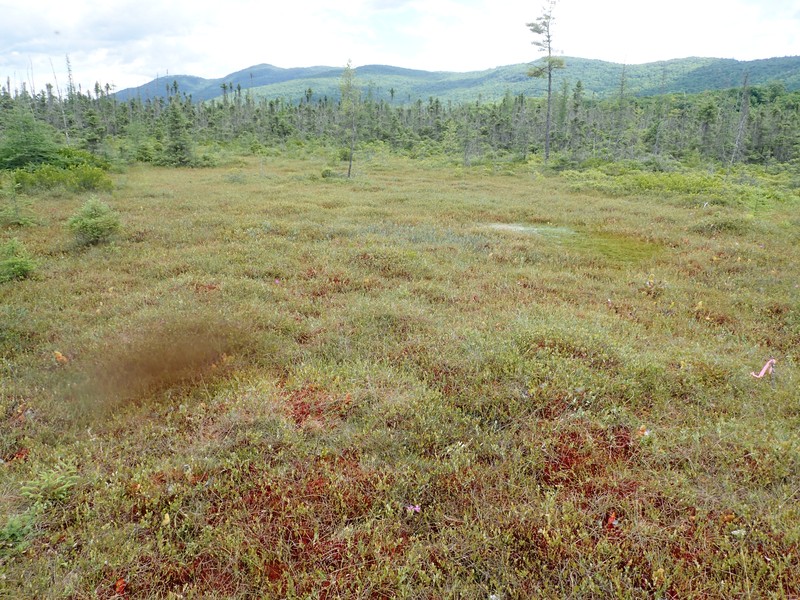 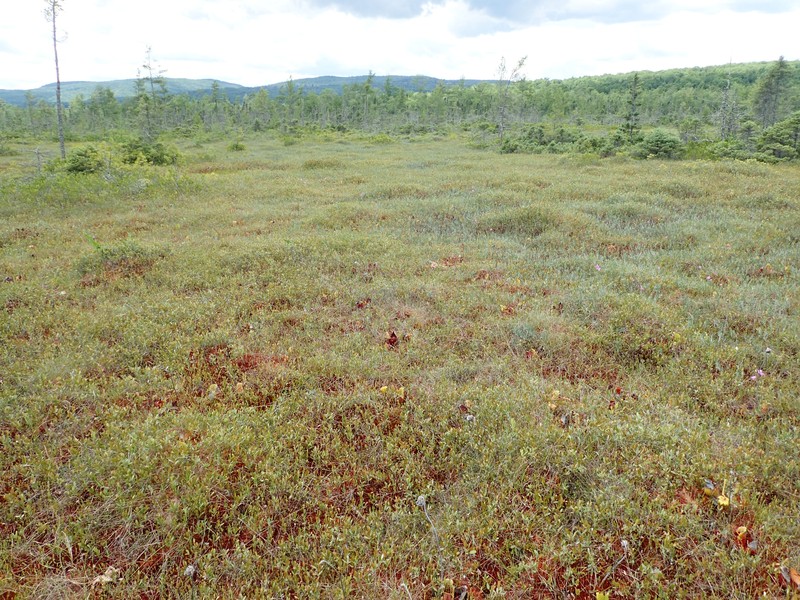 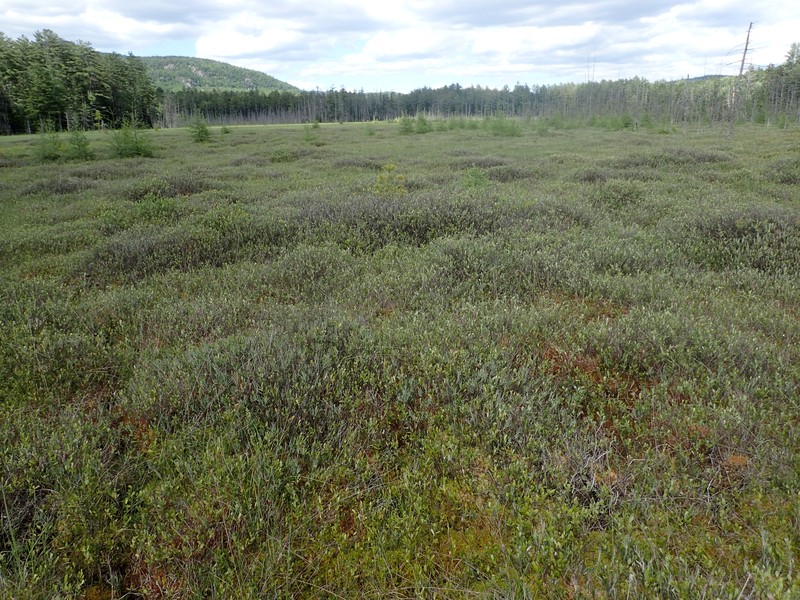 This figure helps visualize the structure and "look" or "feel" of a typical Dwarf Shrub Bog. Each bar represents the amount of "coverage" for all the species growing at that height. Because layers overlap (shrubs may grow under trees, for example), the shaded regions can add up to more than 100%.