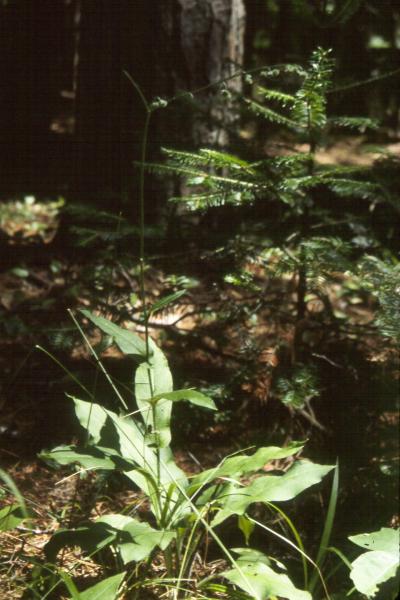 State Conservation Status Rank
S1S2
Critically Imperiled or Imperiled in New York - Especially or very vulnerable to disappearing from New York due to rarity or other factors; typically 20 or fewer populations or locations in New York, very few individuals, very restricted range, few remaining acres (or miles of stream), and/or steep declines. More information is needed to assign either S1 or S2.
Global Conservation Status Rank
G5T4T5
Apparently or Demonstrably Secure globally - The subspecies/variety is uncommon to common in the world, but not rare; usually widespread, but may be rare in some parts of its range; possibly some cause for long-term concern due to declines or other factors. More information is needed to assign either T4 or T5. (The species as a whole is common globally.)

The genus name Cynoglossum is from the Greek "cynos", of a dog, and "glossa", tongue, refers to the rough, tongue-shaped leaf. The European Hound's-tongue, a close relative, was believed in ancient times to heal the bite of dogs and to keep dogs from barking. Our native wild comfrey has been used by Native Americans for medicinal purposes.

There are only three known populations today, although two dozen or more may have been present in the past. The range appears to be retracting northward, but the precise reason for this is not known. More surveys should be conducted in and around the Adirondack region as well as within the Catskills.

In the early 1900s, there were probably two dozen or more populations of this plant scattered around the state. Today, there are only three known populations and all of these are in the northern portion of the state. None of the historical populations present south of the Adirondack region are known today.

Between 1850 and 1900, there were a minimum of 20 populations of this plant. Between 1900 and 1950, a minimum of 22 were reported, so over this one hundred year period, the plant's trend was stable. Since 1950, only six populations have been reported and only three are known today. This indicates a dramatic change over this period and a rather rapid decline in a short period of time.

Although the Valcour Island population is not threatened, the plant has obviously declined in New York for unknown reasons. Maybe this plant is impacted by global warming as the populations appear to be retracting northward.

The management needs are not well understood at this point. This plant may do well in areas that receive small amounts of disturbance.

Research is needed to determine why this species has declined so rapidly within New York and throughout much of the southern portion of its range. More work is also needed on its habitat requirements and management needs.

This plant may be found along the borders of woods and thickets, along trails and pathways through woods, and within upland deciduous woods. It appears to prefer circumneutral or even calcareous areas. The soils are usually sandy or rocky (New York Natural Heritage Program 2005). Rare in open woods and roadsides (Rhoads and Block 2000). Borders, openings, and clearings or under dense shade in coniferous or mixed woods (fir, cedar, spruce, pine, birch, aspen, and occasionally beech and maple), especially in sandy or rocky soil (Voss 1996). Uplands woods (Gleason & Cronquist 1991). Rich woods and thickets (Fernald 1970).

Historically, this plant was found throughout New York. Today, it appears to be restricted to the northern portions of the state. New York is near the southern edge of the range, and this range may be retracting northward.

This is a perennial wildflower that grows 1-2 feet high. The leaves at the base of the plant are 4-8 inches long and oval-shaped, with long petioles and a rough surface. They are 1-3 inches wide. There are also a few leaves on the flowering stems which are more lance-shaped. The upper leaves have heart-shaped bases that clasp the stem, the lower ones have short petioles. At the top of the leafless portion of the stem are a few branches with a group of small, 3/8" wide, five-petaled, blue flowers at the ends. The petal lobes are oblong and do not overlap. The fruit consists of four bristly nutlets.

This boraginaceous plant has large petioled leaves that are 3-8 cm broad. The calyx at the time of flowering is 2-2.5 mm wide and the blue corolla is 5-8 mm wide. The corolla lobes are oblong, but do not overlap one another. The nutlets are 3.5-5 mm.

A plant in flower or fruit is needed for proper identification. Since there are two closely related varieties, a specimen should be collected to allow for later verification. A complete habitat description would be helpful as we are trying to learn more about this plant's habitat requirements.

Cynoglossum virginianum var. virginianum has large petioled leaves that are 5-11 cm broad. The calyx at the time of flowering is 3.5-4.5 mm long. The corolla is 1-1.2 cm broad, and pale lilac to white. The nutlets are 5.5-7 mm long. This plant is mostly restricted to southeastern New York, although a few disjunct populations have been reported from central New York. Hound's-tongue (Cynoglossum officinale) is a European species introduced here and is now weedy. It is larger and more leafy with reddish-purple flowers. Comfrey (Symphytum officinale) is the old world Comfrey that has escaped cultivation. It has whitish, yellowish, or dull purple, bell like flowers only flaring slightly at the end. The leaves run down and merge gradually with the winged stem.

The small blue flowers of this plant begin to appear mid-May and persist into early July, but plants with fruit may be found until the first frost. The prickly fruits easily latch onto passing animals and people. Surveys are probably best conducted when this plant is in flower, but successful surveys may be conducted at any point during the growing season.

The time of year you would expect to find Northern Wild Comfrey vegetative, flowering, and fruiting in New York.