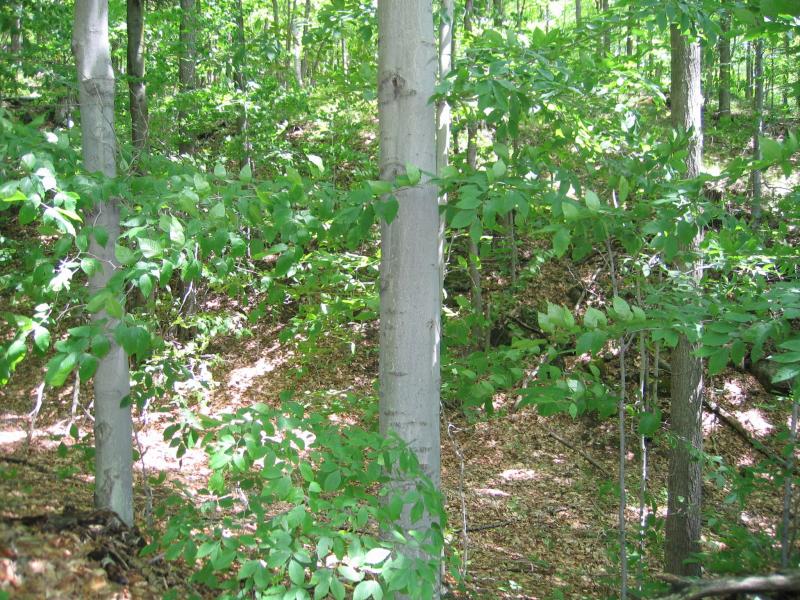 State Conservation Status Rank
S3?
Vulnerable in New York (most likely) - Conservation status is uncertain, but most likely vulnerable to disappearing from New York due to rarity or other factors (but not currently imperiled); typically 21 to 80 populations or locations in New York, few individuals, restricted range, few remaining acres (or miles of stream), and/or recent and widespread declines. More information is needed to assign a firm conservation status.
Global Conservation Status Rank
G4
Apparently Secure globally - Uncommon in the world but not rare; usually widespread, but may be rare in some parts of its range; possibly some cause for long-term concern due to declines or other factors.

American witch-hazel (Hamamelis virginiana) is a common shrub found in beech-maple mesic forests. It was used by native peoples for thousands of years and later by American settlers. Although witch hazel is not as popular as it was in the 1900s, it is still used to prevent infection from cuts, soothe insect bites and sunburn, relieve pain and swelling, reduce acne, tone skin, and as an aftershave.

There are several hundred to a few thousand occurrences statewide. Some documented occurrences have good viability and many are protected on public land or private conservation land. This community has statewide distribution and includes several very large, high quality, old-growth examples. The current trend of this community is probably declining due to moderate and imminent threats related to beech bark disease and development pressure.

The number and acreage of beech-maple mesic forests in New York have declined moderately in recent decades as a result of logging, agriculture, and other development.

The number and acreage of beech-maple mesic forests in New York have probably declined substantially from historical numbers likely correlated with past logging, agiculture, and other development.

Threats to forests in general include changes in land use (e.g., clearing for development), forest fragmentation (e.g., roads), and invasive species (e.g., insects, diseases, and plants). Other threats may include over-browsing by deer, and air pollution (e.g., ozone and acidic deposition). When occurring in expansive forests, the largest threat to the integrity of beech-maple mesic forests are activities that fragment the forest into smaller pieces. These activities, such as road building and other development, restrict the movement of species and seeds throughout the entire forest, an effect that often results in loss of those species that require larger blocks of habitat (e.g., black bear, bobcat, certain bird species). Additionally, fragmented forests provide decreased benefits to neighboring societies from services these societies often substantially depend on (e.g., clean water, mitigation of floods and droughts, pollination in agricultural fields, and pest control) (Daily et al. 1997). Beech-maple mesic forests are threatened by beech bark disease and beech leaf disease. Beech bark disease causes significant mortality and defect in American beech (Fagus grandifolia). The disease results when bark, attacked and altered by the beech scale (Cryptococcus fagisuga), is invaded and killed by fungi, primarily Nectria coccinea var. faginata and sometimes N. galligena (Houston and O'Brien 1983).

Management should focus on activities that help maintain regeneration of the species associated with this community. Develop a plan to eliminate or control beech bark disease. Deer have been shown to have negative effects on forest understories (Miller et al. 1992, Augustine & French 1998, Knight 2003) and management efforts should strive to ensure that regenerating trees and shrubs are not so heavily browsed that they cannot replace overstory trees. Avoid cutting old-growth examples and encourage selective logging in areas that are under active forestry.

Inventory any remaining large and/or old-growth examples across the state.

Critically compare this community to maple-basswood rich mesic forest and confirm that occurrences of each are properly classified. Regularly assess the presence and degree of impact that beech bark disease has on this forest community.

This community is widespread throughout Upstate New York. It is probably represented by different ecoregional variants. It forms the matrix forest of the Northern Appalachian Ecoregion in the Adirondacks and Tug Hill. Beech-maple mesic forest is also present in the Lower New England, the Great Lakes, and the High Allegheny Plateau ecoregions. This community is absent from the North Atlantic Coast Ecoregion where it is replaced by the similar coastal oak-beech forest.

This somewhat broadly-defined community is probably widespread throughout the northeastern U.S. The range is estimated to span north to southern Canada, west to Minnesota, southwest to Indiana and Tennessee, southeast to Virginia, and northeast to Nova Scotia.

Beech-maple mesic forest communities are closed-canopy hardwood forests with codominating sugar maple (Acer saccharum) and American beech (Fagus grandifolia). This is a broadly defined community type with several regional and edaphic variants. These forests occur on moist, well drained, usually acid soils. There are many spring ephemerals that bloom before the canopy trees leaf out. Hemlock (Tsuga canadensis) may be present at a low density. In the Adirondacks a few red spruce (Picea rubens) may also be present.

The codominance of American beech and sugar maple and a variety of herbaceous species, including a good display of spring ephermals, identify this community. Typically there is also an abundance of tree seedlings, especially of sugar maple; beech and sugar maple saplings are often the most abundant small trees in the understory, along with shrubs such as American witch-hazel (Hamamelis virginiana) and hobblebush (Viburnum lantanoides).

Known examples of this community have been found at elevations between 320 feet and 3,900 feet.

Because the key to distinguishing a beech-maple mesic forest from related types is its vascular plant composition and diversity, it is easiest to identify the community during the growing season, from late May through summer. Striking seasonal leaf color can be enjoyed in the fall. 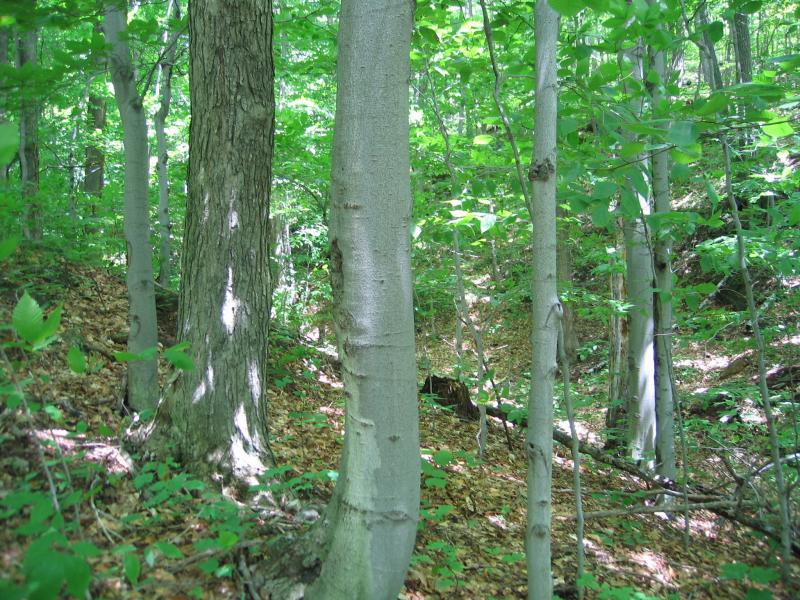 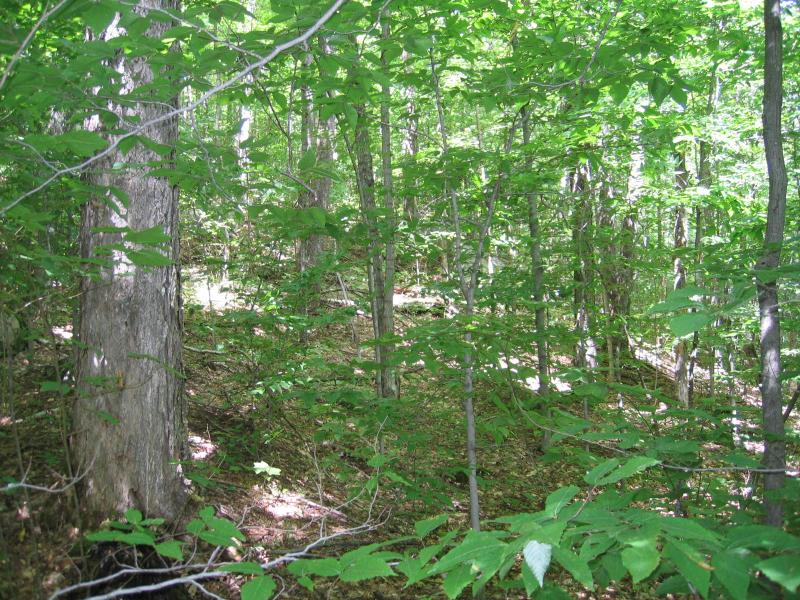 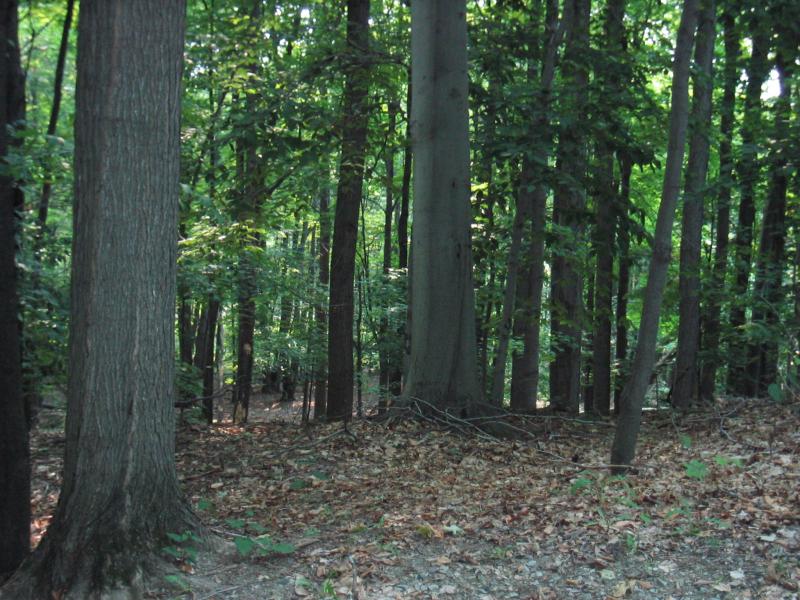 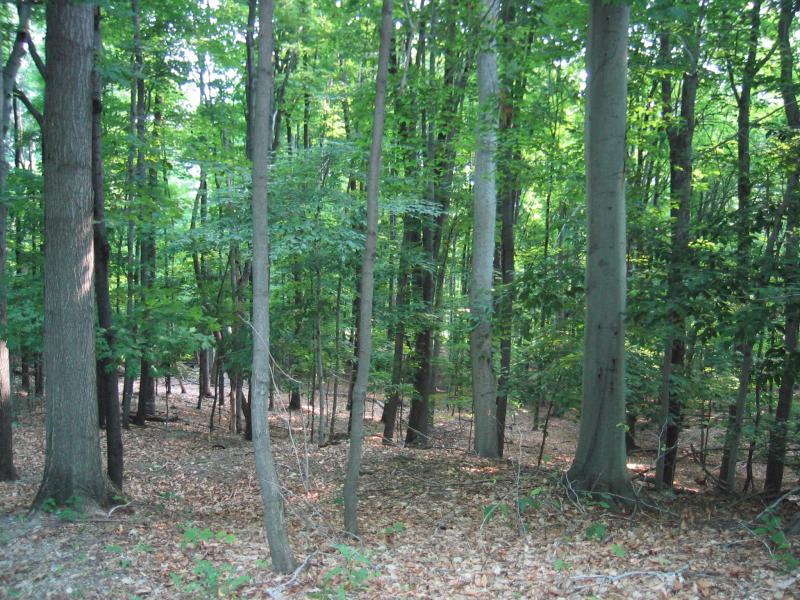 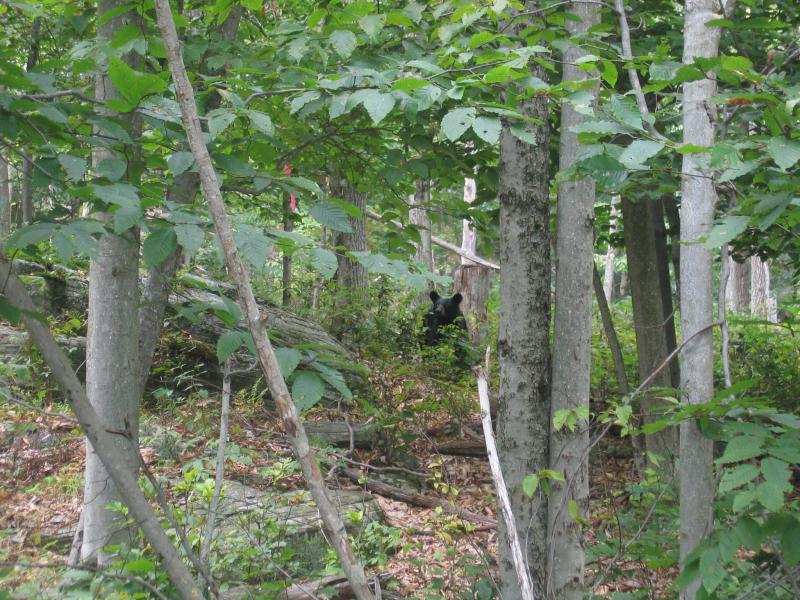 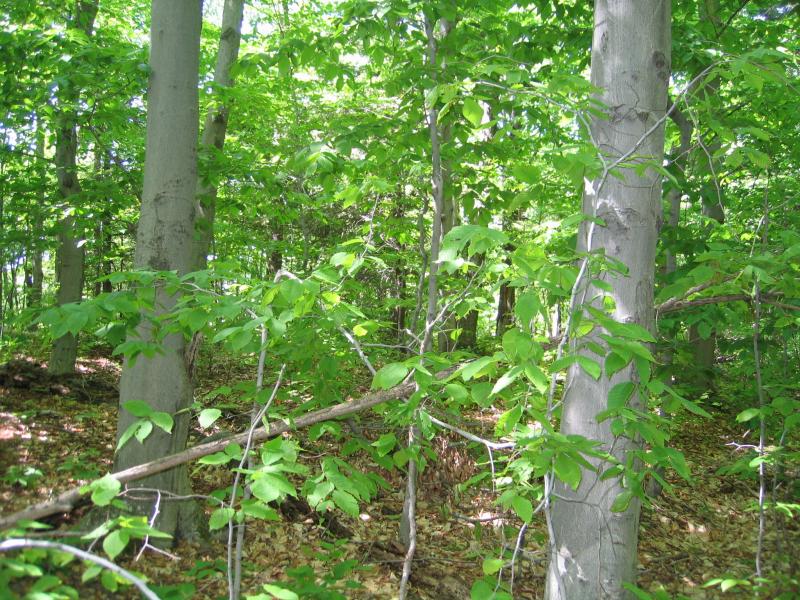 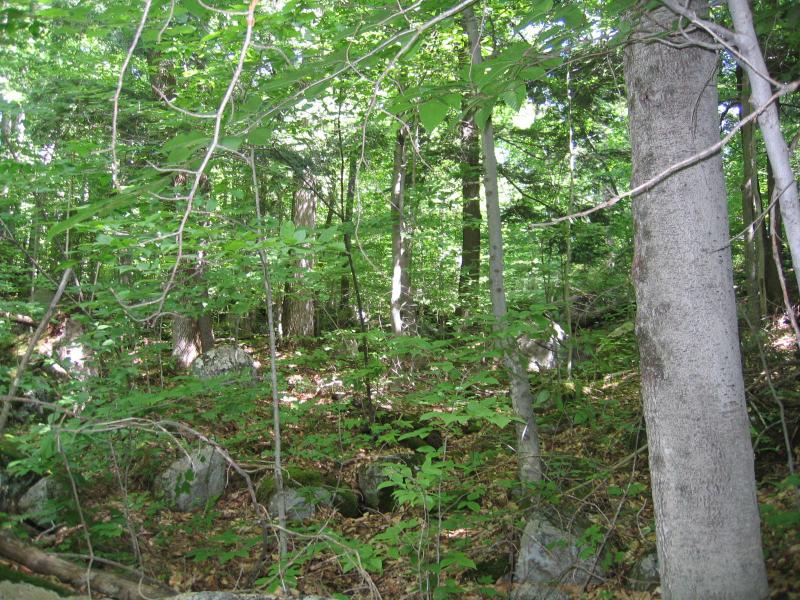 This figure helps visualize the structure and "look" or "feel" of a typical Beech-Maple Mesic Forest. Each bar represents the amount of "coverage" for all the species growing at that height. Because layers overlap (shrubs may grow under trees, for example), the shaded regions can add up to more than 100%.

Information for this guide was last updated on: March 21, 2022