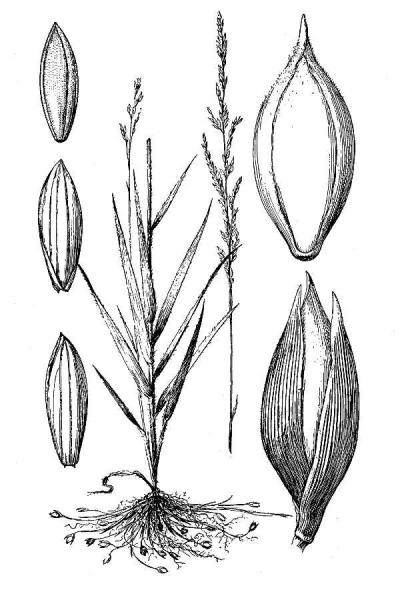 State Conservation Status Rank
SH
Historical (Possibly extirpated) in New York - Missing from New York; known only from historical records (more than 30 years ago), but still some possibility of rediscovery upon further searching.
Global Conservation Status Rank
G4
Apparently Secure globally - Uncommon in the world but not rare; usually widespread, but may be rare in some parts of its range; possibly some cause for long-term concern due to declines or other factors.

Amphicarpic plants produce both aerial fruits and subterranean fruits. Like peanuts, this grass produces subterranean fruits early in the season and a few aerial fruits, which are also fertile, later in the summer (Flora of North America Editorial Committee 2003). The species is named for the botanist Frederick Pursh who discovered the plant (Fernald 1950).

There was one population that was newly documented in 1992 but it may not have survived. Additional surveys, especially during low water years, are needed to determine if the population has survived.

This population has been surveyed twice since its initial discovery in 1992 but has not been seen again. It may have died out.

This population has been surveyed twice since its initial discovery in 1992 but has not been seen again. It may be waiting for a low water year to germinate but low water has not happened in a long time.

Both trampling of the pondshore and overgrowth of nearby shrubs are apparent threats.

The only site Peanut Grass is known from in New York is a coastal plain pond shore. The substrate is a mixture of sand and organic material (New York Natural Heritage Program 2010). Wet pine-barrens (Gleason and Cronquist 1991). Damp sandy pinelands (Fernald 1970).

There is only one known population on the South Fork of Long Island and no other historical records.

This grass is most common along the coastal plain from New Jersey to Georgia with a few occurrences in New York and Massachusetts.

Amphicarpum purshii is an annual grass with erect stems 30 to 80 centimeters tall. The leaves, sheaths, and blades both are hairy, the lower blades are up to 15 cm long and 1 to 1.5 cm wide while the upper leaves are reduced. The panicles are simple, 3 to 20cm long, are with a few main branches and appressed branchlets. As in all grasses, the small, inconspicuous flowers occur in scaly structures called spikelets. In Amphicarpum each spikelet contains one perfect flower and one sterile one. The spikelets are glabrous and awnless, and 4 millimeters long. A. purshii also has subterranean spikelets with solitary flowers borne on long stems. These underground spikelets are 7-8 mm long, long-pointed, and sparsely hairy. All or at least most of A. purshii's seeds are produced by these underground flowers (FNA 2003, Gleason and Cronquist 1991).

The best life stage to identify this grass is when it is in fruit.

Amphicarpum amphicarpon is the only species of Amphicarpum in New York. It was previously considered part of the genus Milium. All Milium species, including the sole New York species M. effusum, have spikelets which disarticulate above the glumes with the glumes remaining on the stem after the spikelets drop, while in Amphicarpum the spiklets disarticulate below the glumes. Milium effusum also has glabrous leaf blades, while A. amphicarpon's leaves are hairy (FNA 2003). When the entire plant is observed, the solitary underground spikelets at the end of long stems are distinctive among New York grasses.

Flowering grass flowers in August and September and the fruits may persist through November.

The time of year you would expect to find Peanut Grass flowering and fruiting in New York. 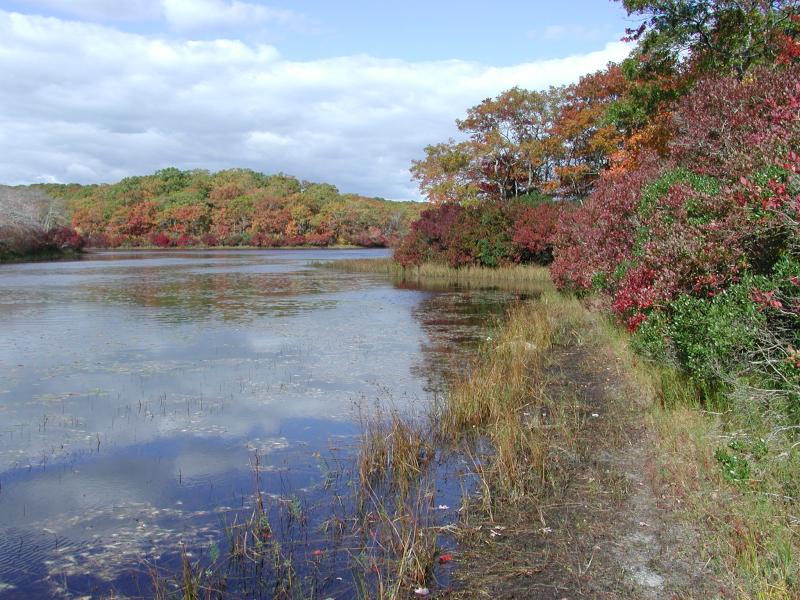