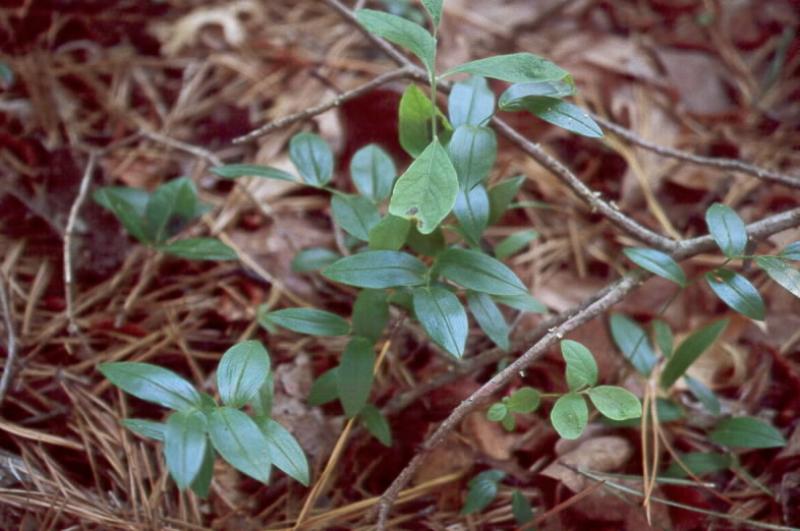 The shiny leaves of this species are fairly easy to see from a distance. Unfortunately this has not helped relocate two of the three locations on Long Island where this species was last seen in the 1980s. The genus name comes from the similarity of the hanging flowers of this genus to the uvula hanging at the back of your throat (Fernald 1950). The species name refers to the hairs at the top of the stem (Flora of North America Editorial Committee 2002).

There are three verified occurrences but two have not been seen as many years. These are the only sites known.

The one existing population seems stable but it is in an area where flooding may be a problem.

The long-term trend is apparently negative. Two of the three original populations have not been seen again and they may not have persisted.

There is little human threat to the existing population although persistent flooding may be a problem.

Research is needed to determine if the existing population can be augmented.

In New York this species grows in the transition zone between the narrow red maple-black gum woods and pitch pine oak barrens surrounding coastal plain ponds. The understory is fairly open and easy to walk around in with open light (New York Natural Heritage Program 2012).

This small wildflower is only known from Suffolk County, Long Island.

Pine barren bellwort is a low, herbaceous wildflower that grows about 2-3 dm tall with ascending stems that are solid, hairless, and angled in cross-section. The rhizome is very short, with clustered, thickened roots. The fully expanded alternate leaves are ovate to elliptic with acute tips and cuneata to a sessile base. Both surfaces are shiny green with no hairs underneath. The hanging flowers are light yellow and the style is divided to about half its length (Weakley 2004, Uttal 1991).

This plant can be identified vegetatively. It is best identified in flower but it often does not flower on Long Island.

Uvularia perfoliata has perfoliate leaves. Uvularia sessilifolia is most closely related but the leaves are not shiny and are glaucous beneath. The rhizome is elongate, with scattered, fibrous roots. The flower style is divided only up to a third of its length. It grows in rich deciduous woods, not pine barrens. Hairy Solomons-seal, Polygonatum pubescens, may also look similar but the underside of its leaves are also glaucous and there are hairs on the 3-9 prominent veins. It also tends to grow in richer deciduous habitats (Weakley 2004). The leaves of Mayflower, Maianthemum canadense, look like this plant from afar but the stem is more zig-zag and the leaves are heart-shaped at the base.

The best time to identify this plant is in April and May when it is in flower, is but it can be identified vegetatively through September.

The time of year you would expect to find Pine Barren Bellwort vegetative, flowering, and fruiting in New York.

Weakley, A.S. 2004. Flora of the Carolinas, Virginia, and Georgia. Working draft of March 17, 2004. University of North Carolina, Chapel Hill, NC. 871pp. Currently published by the author and available on the web at (http://www.herbarium.unc.edu/flora.htm).