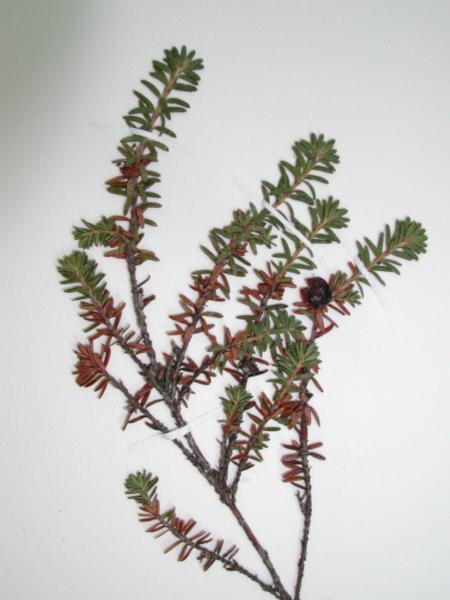 This species was only first recognized to be present in New York State in 1990. It apparently had been overlooked or in a few cases misidentified by many fine botanists (Zika 1990). The genus name Empetrum comes from the Greek en, which means upon, and petros, which means rock (Fernald 1970). This name alludes to the way this species grows on rocks. The species is named after Dr. edwin herbert Eames (1865-1948) a medical doctor and prolific plant collector from Connecticut and co-founder of the Connecticut Botanical Society. He was the first to observe the distinctive characters of this species. The common name purple crowberry refers to the deep purple color of the fruits and makes reference to the fact that, at least in the arctic where this plant also grows, birds relish the fruits (Waller and DiGregorio 1997).

There are five known populations and one population which was last seen in 1939. The latter population has been searched for without success but further efforts are needed to determine if it is truly extirpated. The known extant populations are restricted to the highest peaks in the Adirondacks and are all within about 5 air miles of each other. All populations are very small and are threatened by trampling from hiker traffic.

This species was first recognized to be in the state in 1990. A few mis-identified specimens go back to as early as 1939. All populations are extremely small but no clear short term trends are known.

One population is only known from a 1939 collection. A search to this locale was unsuccessful in relocating the population but most of the habitat was not searched and therefore, it is unknown if this population has become extirpated. There are no clear data on long term trends.

At all sites trampling by hikers threatens at least parts of the very small populations. Left unchecked, global climate change is also a threat.

Since all the populations are small, detailed information on the size of the populations should be gathered on a regular basis to assess the trends of this species. The locale where the one historical population is known from should be more thoroughly searched.

In New York, this species occurs only on the highest summits of the Adirondacks in alpine meadows often associated with extensive exposed granitic bedrock (New York Natural Heritage Program 2007). Exposed granite rock and gravel (Haines and Vining 1998). Granitic or acidic gravel and sands in other parts of its range and mountains of New England (Fernald 1970).

In New York, the species is known from some of the highest peaks in the Adirondacks mostly within a few miles of each other.

This species occurs from Labrador west to Quebec, Ontario, and Saskatchewan, and south to the high mountains of New England and New York. It also occurs in northeastern Minnesota and northern Michigan (Fernald 1970, Gleason and Cronquist 1991).

Purple crowberry is a very low trailing shrub that makes an attractive dense ground cover in the exposed alpine areas where it occurs. Its twigs, at least when young, are covered with dense white hairs that obscure the surface of the twigs. The evergreen leaves are small and needle-like. When first expanding the leaves are hairy and ascending but become more spreading with age. The small and inconspicuous flowers occur in the axils of the leaves. The fruits are about .2 to .5 inches in diameter and purple-black (Fernald 1970, Gleason and Cronquist 1991).

This species is a woody evergreen. The twigs and branchlets especially when young are densely white-tomentose to white-villose and are not glandular. The leaves are evergreen, entire, and stiff, with long ciliate margins when new. The flowers are mostly bisexual. The drupes are red to purple-black.

This species can be easily identified throughout the year when snow is not covering it, although fruits make identification easier.

The other species of Empetrum (E. nigrum ssp. hermaphroditum) that occurs in New York and can be sympatric with E. eamesii ssp. atropurpureum is superficially very similar. It differs in having twigs and brachlets stipitate glandular, not white-tomentose or white-villous, black drupes, and the new leaves with only a few hairs at the tops of the margins, not along the entire margin like purple crowberry.

Harrimanella hypnoides is another alpine plant that is believed to be extirpated in New York. It perhaps could be mistaken for Empetrum eamesii ssp. atropurpureum when vegetative due to its evergreen needle like leaves. It can be distinguished by its smaller size, its rough margined leaves arising along the entire stem, its lack of dense white hairs on the twigs, and its showy, white, bell-shaped flowers at the tips of the stems that produce dry capsules.

This plant starts to have fruits in mid-July and these can last into the fall. Therefore, the best time to survey for this species is from mid-July through late October although vegetative plants can be distinguised anytime during the growing season.

The time of year you would expect to find Purple Crowberry vegetative, flowering, and fruiting in New York.

A. A. Anderberg (1994c) and V. Mirré (2004) found good separation of the red-fruited Southern Hemisphere plants (Empetrum rubrum Vahl ex Willdenow), although Li J. H. et al. (2002) and M. Popp et al. (unpubl.) did not. Nevertheless, we are treating E. rubrum as distinct from all North American taxa. Popp et al. did find that red-fruited, diploid E. eamesii was well separated from other taxa in the region, whereas, in terms of molecular genetics, the Southern Hemisphere red-fruited diploid E. rubrum has its closest connections in the Northern Hemisphere not to E. eamesii but to black-fruited Northern Hemisphere plants treated here as E. nigrum in the broad sense. The solution is to recognize the diploid E. eamesii, the diploid and tetraploid E. nigrum, and E. atropurpureum as a possible allotetraploid from diploid E. eamesii and a diploid E. nigrum. This leaves a great deal of variation within E. nigrum in the broad sense unaccounted for. Various hybrid combinations were alleged by D. Löve (1960); these require confirmation.

Anderberg, A.A. 1994. Phylogeny of the Empetraceae, with Special Emphasis on Character Evolution in the Genus Empetrum. Systematic Botany 19: 35-46.