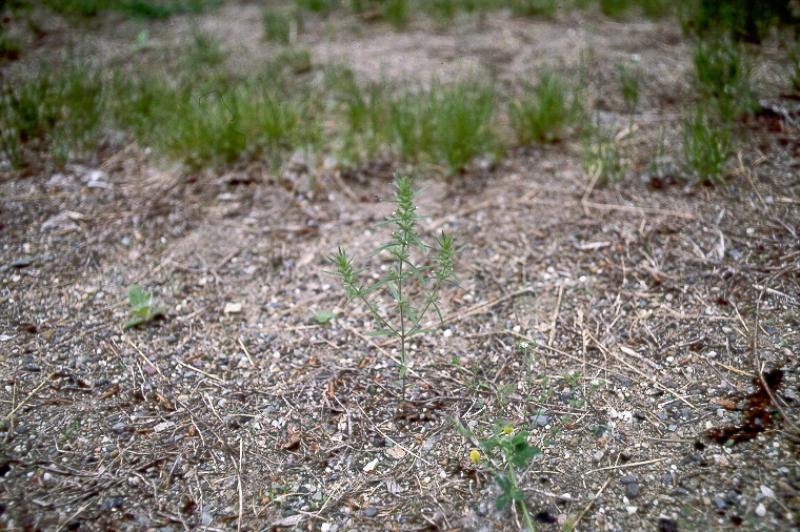 The genus name Hedeoma comes from the greek word "hedyosmon", an ancient name for mint meaning sweet scent. The leaves and stem are hispid, meaning covered with short stiff hairs, thus the species name. This species is closely related to American pennyroyal, Hedeoma pulegioides, which had many medicinal and culinary uses. The Anglo/Norman word "puliol real" meaning Royal Pulegium or Royal Fleabane (pulex is latin for flea), was eventually changed into the modern word Pennyroyal.

There are 11 existing populations but only three of these are large and protected. The remainder of the populations have less than 100 plants each. There are 17 historical occurrences and it is expected that with more surveys and a better understanding of habitat preference, many more populations could be found. Since this species is similar to the more common American pennyroyal it may be overlooked.

Only a few of the existing populations have been rechecked in recent years and their populations seem stable. Since the species occurs in disturbed areas short-term trends probably vary widely as disturbance changes.

The overall abundance of sites has remained about the same over the last 100 years but plants have disappeared in grazed areas as succession has taken over. This species has appeared in other human disturbed areas such as roadsides but not to the extent that it has been found to be common.

The open habitat of this species may be threatened by succession if the area is not kept open but at the same time plants may be killed by direct impact from mowers, bulldozers and ATVs.

Disturbed areas need to be maintained without directly damaging plants. This can be done by mowing at the appropriate time of year after seed has been disbursed.

Research is needed to understand habitat preference and why this species is found in common disturbed habitats but is not abundant in all of them. What is its limiting factor?

In New York Mock-pennyroyal has been found at a wide variety of open, dry sites. While some of these habitats are calcareous to circumneutral, such as red-cedar rocky summits, rich talus slopes, and alvar grasslands, there are also healthy populations at mowed airport aprons, dunes, and disturbances within pitch-pine plains (New York Natural Heritage Program 2007). Dry soil, sand dunes, and barrens (Gleason and Cronquist 1991). Plains, sands and rocky banks (Fernald 1970).

This species occurs at scattered locations throughout eastern New York from Long Island to the St. Lawrence Valley.

Mock-pennyroyal is found in most of the U.S. from the Rockies east (excluding Maine, New Jersey, Delaware, and the Carolinas), and across Canada from Quebec to British Columbia.

Hedeoma hispida is a small, annual, aromatic herb of the mint family, from 1 to 4 dm tall. The stems are finely hairy and the leaves are opposite, linear, 1-2 cm long, and entire. The flowers are purplish-blue, up to 5mm long, and emerge in fours from each leaf axil. The sepals are covered in long hairs, and their upper halves are divided into awl-shaped teeth.

Mock-pennyroyal is best identified when flowering or fruiting.

False pennyroyal flowers in June and July, the fruits persisting into August.

The time of year you would expect to find Rough Pennyroyal flowering and fruiting in New York.