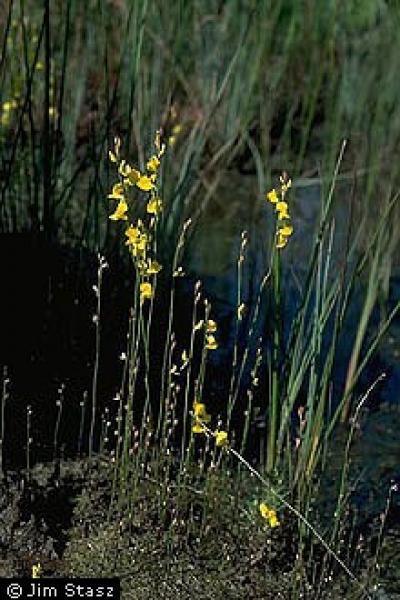 Genus name is Latin for having a little bladder or bottle. It refers to the insect-catching underwater bladders of these plants (Fernald 1950). Some earlier treatments of the genus thought that this species was not separate from Utricularia cornuta. They both have linear leaves like those in the rush genus Juncus, thus the species name (Schnell 2002).

There are four existing populations and three of them consist of multiple, hydrologically connected ponds. Populations at each site are only in the hundreds. There are two populations from the early 1900s which have not been resurveyed.

There have not been sufficient surveys to understand the short-term trends of this species, especially with a species that fluctuates according to water levels.

The long-term trend appears to be stable. This plant has always been rare in New York and the number of populations has remained about the same over last 100 years.

The pondshores need to be protected from direct disturbance from ATVs and excessive trampling. Exotic invasive species must be prevented from colonizing the shores and any existing populations must be eliminated. A natural buffer of at least 200 feet should be established around the ponds to prevent excessive runoff and pollution events.

This species occurs almost exclusively on coastal plain pondshores. However, one population does occur in a boggy sedge meadow with white cedar at the edge (New York Natural Heritage Program 2012). Wet shores (Gleason and Cronquist 1991). Wet sandy places that are frequently flooded by a few centimeters of water in particularly wet times (Schnell 2002).

This small carnivorous plant is currently known from Suffolk County, Long Island with historical records to the west in Nassau County. There is also an unconfirmed report from Ulster County which is probably in error.

This carnivorous plant occurs from Long Island south along the Atlantic Coastal Plain to northern Florida and west along the Gulf Coast from the panhandle of Florida to East Texas.

Rush bladderwort is a terrestrial bladderwort with leaves that are mostly subterranean and seldom seen. The flowering peduncles are 40 cm tall and always purple towards the bottom. There are 4-32 nodes along the peduncle and the little bractlets are slender and pointed. There are open and closed flowers on the same stem or within the colony. The flowers are bright yellow and have upper lips that are shorter than the lower lips whose lateral edges fold down into a prominent, apronlike appearance. The spur is vertical and stands out away from the lower lip. The open flowers are 1 cm long and not fragrant (Schnell 2002).

This bladderwort can only be identified in flower.

The common horned bladderwort, Utricularia cornuta, looks very similar but it is generally larger and the more clustered flowers are only open flowers, never a combination of open and closed flowers. It flowers in the spring and the peduncles are not purple at the bottom. The flowers are 2 cm long and fragrant (Schnell 2002). It grows upstate as well as along the Long Island coast.

The best time to identify the species is July through September.

The time of year you would expect to find Rush Bladderwort flowering in New York. 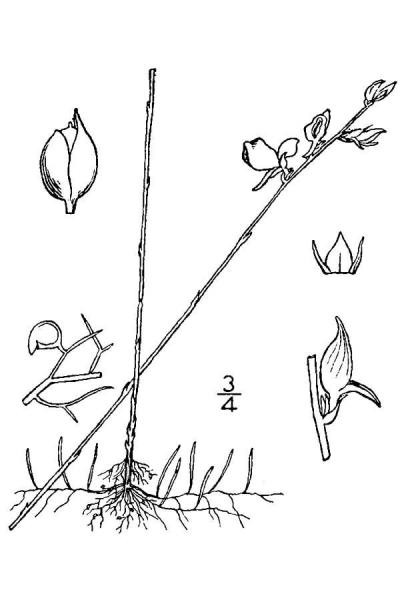