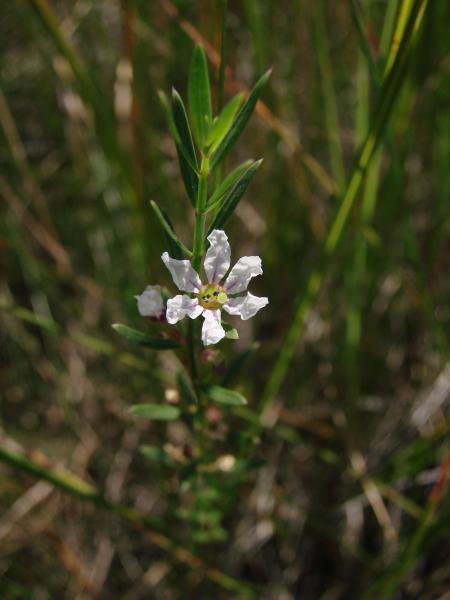 The genus name is derived from the word lytron, a name used by the ancient Greek botanist Dioscorides for the well known aquatic weed purple loosestrife. The species name refers to its linear leaves (Fernald 1950).

There are two existing populations, one with hundreds of plants while the other is of unknown size and quality. There are no other historical records known from the state.

The one large existing population's short-term trend seems stable although there is phragmites invading the area.

Phragmites is invading the salt marshes where this species occurs. It threatens to eliminate both populations.

Phragmites needs to be eliminated from the saltmarshes where this species occurs.

Research is needed to discover a technique that will allow augmentation of populations.

There are two existing occurrences, and one additional historical occurrence from eastern Suffolk County on Long Island.

Lythrum lineare grows on the coastal plains of the Atlantic and Gulf Coast from Connecticut to Louisiana and Texas. It is rare from New Jersey northward. There are a few inland populations in Alabama, Mississippi, Louisiana, and Texas.

Saltmarsh loosestrife is a small perennial wildflower with erect, hairless stems 4 -15 dm tall and branched above. The leaves are only 4 mm wide and narrowed to a sessile base. They become smaller and more narrow above. The flowers arise in the axils of the leaves on short pedicels. The thin, crinkly petals are pale purple to white. The styles are of different lengths in different flowers (heterostylic) (Gleason and Cronquist 1991).

It is best to identify this plant when it is in flower.

Annual loosestrife, Lythrum hyssopifolia, is an exotic loosestrife which can occur in saltmarshes and has been found on Staten Island. It is an annual and the leaves are mostly alternate, not opposite. The styles of the flowers are all the same length. The flower color can be very similar to that of Lythrum lineare (Gleason and Cronquist 1991).

The best time to identify Lythrum lineare is when it is in flower during August and September.

The time of year you would expect to find Saltmarsh Loosestrife vegetative, flowering, and fruiting in New York. 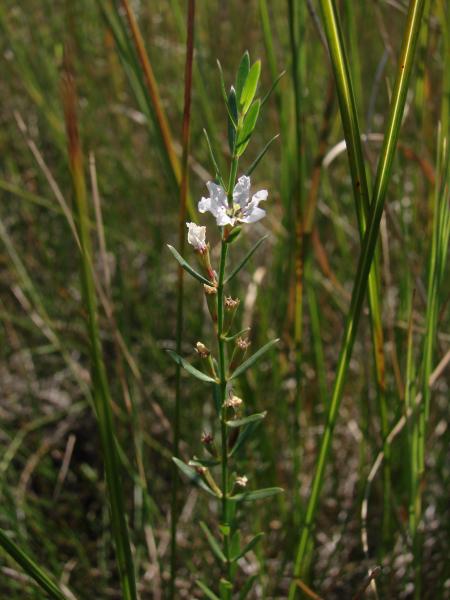